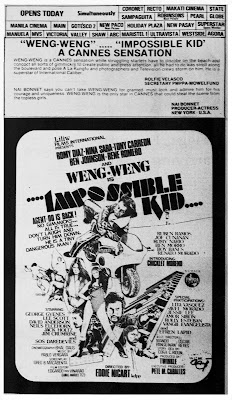 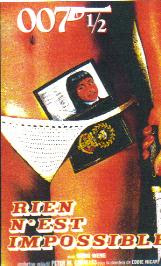 In The Impossible Kid, midget superhero Agent OO is back and is shorter than ever in his little white suit and pudding bowl haircut, now working for the branch of Interpol. The Chief, a low-rent version of M complete with his own Miss Moneypenny, sends him in the pursuit of Mr X, an arch villian with a white sock on his head, who is holding the to ransom. Two businessmen, Senor Manolo (classic bad guy Romy Diaz) and Don Simeon (Tony Carreon), pay the demands but Weng Weng suspects foul play and goes deep undercover to reveal the identity of Mr X. Here the James Bond references kick into top gear: Agent OO has even MORE gadgets at his disposal, including a miniature bike which sounds like one of those high-pitched grass cutters and does an incredible leap across a ravine - along a very visible wire! Another highlight is an incredible stunt where Weng Weng gets to use his circus training and walks along a tight rope between two buildings. He then jumps down a garbage chute straight onto his waiting motorbike. Impossible? Mais non!

The opening is a killer - Weng is suspended over the side of a building and gets to ogle naked women through the windows. Now, nudity has never presented a problem to me. But in a Filipino kids film? With midgets involved? The Impossible Kid now ranks up there with 70s Danish sexploitation export The Sinful Dwarf as sleaze mini-classics. Not exactly “dwarfspoitation”, but very sordid indeed. Musically the film offers the same hodge-podge of garbled Bond scores courtesy of Pablo Vergara and, more bizarrely, the theme to The Pink Panther (well, almost). Top of the hit parade is the opener “The Impossible Kid” sung by a cabaret songstress who croons to her micro-hero: “I love you my Weng Weng, come to me and kiss me, I love you Weng Wengggggg!!!” Unfortunately the film is no For Y’ur Height Only, so hoping to strike Comedy Gold a second time is really asking for the impossible - without the surreal rescripting and preposterous English dubbing with bad Peter Lorre impressions, it’s not the same delirious experience. Still, any Weng is good Weng, and we should be thankful for the little guy getting another shot at filmic infamy.