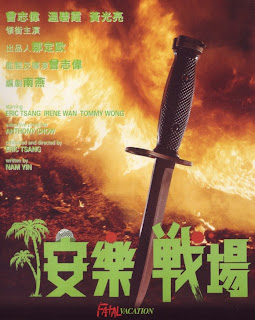 Welcome to the – the land of sweet smiles, sunny days and getting your head blown off. My guess is that the Philippine Tourist Board did not put their stamp of approval on this film – not unless they wanted to keep tourists far away. The film does not treat the kindly with remarks such as “You must have eaten too much Philippino food to be so stupid” or having soldiers willing to sell the tourists everything they own including the clothes they are wearing. This film falls into the interesting sub-genre that can be described as “Go to and prepare to be raped, killed or possessed and maybe all three”.

Many of the films in this category deal with the supernatural – black magic and witches – but this one takes a different tact. This was made in 1990 a year after Tiananmen Square and seven years before Hong Kong was to be handed over to . The Handover is on the minds of many of the characters as they talk about emigrating out of before it is too late. Here director Eric Tsang and writer Nam Yin paint a fearful picture of this future world.

They do so with a film that leaves little to the imagination – subtlety is nowhere to be found here – this has exploitation written all over it in big red colors, but as broad and absurd as it becomes I did find it quite involving and harrowing at times. The film is littered with dead bodies and their deaths are up close and personal. There are also a couple of rape scenes that had me flinching.

A tour organized from Hong Kong comes to the . The group consists of your usual motley crew of different types. The organizer is Irene Wan and the guide is Eric Tsang. Among the tourists are two grandparents (Victor Wong and Dang Bik-wan) who are bringing their grandchild, two cops (Nam Yin is the older one I believe), three triads (headed by Tommy Wong) two young female adults (the nice one being Cecilia Yui Ching Ching), a fellow with two mistresses (Joan Tong is one) and a set of twins. Many of them will be dead by the end of the film – it sort of becomes a guessing game as to who will be the next to die.

In Quezon the bus is hijacked by a group of rabid Communist terrorists who demand that the government release one of their members for the tourists – and to show they mean business they begin the process of killing the tourists – two by two. In one gripping scene the Communist leader forces Tsang to take a gun with one bullet in it and aim it at his group one by one and pull the trigger until he has to point it at Irene who he has fallen in love with. Tsang is terrific in this film and in this particular scene he wrenches every emotion possible out of it.

Eventually, in true fashion they bond together, break out, steal some weapons and do loads of killing themselves. Fortunately, they must have seen enough Chow Yun Fat films to know how to handle the automatic weapons! After watching this I finally realized what was wrong with the strategy in the Vietnamese war. Instead of sending well-trained armed forces, we should have sent busloads of tourists!

Labels: Asians in the Philippines