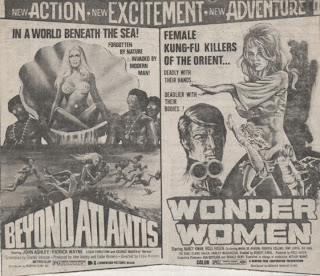 In late ‘70, Sid flew to the for what was to be the first of six features over three visits. “George Montgomery had done four or five pictures there, and Roger had just produced a war picture with Monte Hellman and Jack Nicholson there. He realized it was a cheap place to make action movies, so he sent Jack Hill there.” Hill and Sid filmed The Big Doll House in three weeks. “The State Department didn’t know we were there. Our liason was the local constabulary or base commander. We just greased whoever was the top person in the region. They were happy to have us.” When Doll House opened in ‘71, its per screen average was higher than that of Summer Of ‘42, the big hit at the time. “Roger bought ads in Variety to rub their noses in it,” Sid laughed.

Haig and Hill soon returned to the Philippines for a couple of months to film a sequel, The Big Bird Cage, on which Sid was also 2nd Unit Director. He returned to the for a small role in The Don Is Dead, then returned to the islands for six months. “I was the longest-staying guest in the history of the Intercontinental Hotel. The staff threw me a party. We did four pictures back to back, sometimes on top of each other. Eddie Romero had me working on Beyond Atlantis during the day and Black Mama White Mama at night. Wonder Women was written and shot while we were down there. The others, like Woman Hunt, were usually written before we left the States and rewritten once we got there.”

The features also introduced Pam Grier. “I did Pam’s first six films,” Sid says with pride. “She had no acting experience when she started. She was a back-up singer and a receptionist at American International. She was an extremely striking woman and we thought if she could walk and read a line, she’d be okay. On The Big Doll House, I would go over the script with her every night, sort of as an acting coach. She’s turned out to be quite an actress. I’d love to work with her now.”

Sid still speaks fondly of the hospitality and genial production conditions of the pictures, but regrets that the situation there has changed irrevocably. “Coppola ruined the for filmmaking,” Sid says bluntly. “Everybody knows that the worst thing that you could possibly do is let a film crew into your home, because they may trash the place. On Apocalypse Now, Coppola trashed the Phillipines. His attitude was, ‘Just buy it, we’ll trash it’. He ruined a lot of agriculture. When you start digging six mile gasoline trenches through the country, you’re bound to destroy some people’s cornfields.”