During the ‘80s there was a fair amount of foreign films shooting on locations in the P.I. [Mostly as a result of Coppola having shot Apocalypse Now there for 2 years and leaving a lot of equipment, sets and trained crew behind, when he left]. After Dragon Force played at the Manila Film Festival and I went there to help promote it, I got invited back to do work. The production company responsible for the films in which I participated in the P.I. [as the lead actor] were produced by a company called Kinavesa owned by K.Y. Lim [AKA “Slippery” Lim].

I wouldn't call K.Y. unscrupulous. He was just very parsimonious, and an unsympathetic, hard nosed Chinese businessman. He was in it strictly for the money. He didn't lie, or blow smoke up your ass about making you a star, and he had no pretensions about what he was doing, or even trying to make serious films. He offered you a job, settled on a fee, and he made the film when he said he would. He paid you the money he said he would, when he said he would, without trying to fuck you, [literally, there are an awful lot of queer Filipino producers], or fuck you around. Compared to most other Filipino producers that made him a true prince among men.

His films were consistently made for well under US$50K [all in], shot in less than 28 days, and marketed as “Cannon fodder”. K.Y. would take them to Cannes or Milan and sell them to Golan & Globus at Cannon who would package them as freebies together with their Rambo or other big films as a marketing ploy [when distributors complained that they were charging too much for territorial sales of their big action films, Cannon would throw in 2 or 3 of these little Kinavesa cuties for free, as if to make their other big films seem a better deal]. 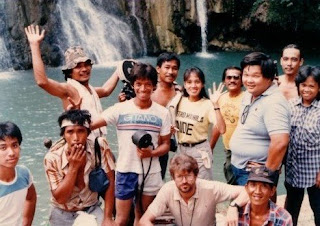 At that time most of the Kinavesa quickies were directed by Teddy Page [whose real name was Teddy Chiu, a Philippine Chinese kid in his early 20's at the time] and Jun Gallardo, a local cameraman / director in his forties. I remember both of them being good guys, just trying to make a living to support their families in a very third world environment. Most of the actors you mention, along with me, formed part of a loose sort of ‘troupe' that they would draw on to make the films. I made 4 of them and would have done more, because I had rented a choice pad on [overlooking and the Playboy club pool deck] for US$100/month, and was always looking for an excuse to use it. I probably would have done more of them, but for the fact that every time Richard [Harrison] appeared in one he ate up 50% of the whole budget, and they wouldn't have enough left over to pay me a “decent” wage. K.Y. and Teddy would approach one or all of us to do certain parts in the films, [in my case they would call me in HK, and send a ticket if I said yes]. If I was available in terms of scheduling, and they would pay enough money, I would do it. My going rate for Kinavesa was US$2000 a film and a round trip airfare from HK.

I turned down more than I did, because they seldom wanted to pay over US$1500 [and Mike Monty and some other guys you mention would work for less than I would]. The films always wrapped start to finish in under a month. There was a lot more camaraderie and spirit de corps on these films than we ever had on the HK productions. Conditions were terrible. The food was bad, the lighting was a joke, and the scripts were patently formulaic and ridiculous, but there was no bullshit and no pretence. None of us had anything better to do and it was generally a lot more fun and better atmosphere than I ever had on the HK productions, hanging out in Pagsanjan, smoking Filipino rag weed, riding around in Jeeps and trashing ass with the Filipino girls.

The Filipino crews were way more sympathetic than the Chinese, and of course spoke English as well. It was on one of these productions that I first met Richard Harrison, but I only did one or two films with him because he used to get paid a lot more than any of the rest of ‘the troupe'. He would eat up so much of the budget that K.Y. could seldom afford both me and him in the same film. He was flown out from , mostly with his wife, paid better and put up in a decent hotel because he had more name recognition with Golan/Globus than any of the others of us. My impression is that all of us except Richard were pretty much living hand to mouth and did the films to survive and for fun, rather than for any great love of the art of film making. Lets face it, there wasn't much art involved beyond staying sane, and sober enough not to get hurt in a fight scene, or by the pyrotechnics, and chase scenes in beat up old cars that couldn't pass a road inspection, even in the Philippines [bald tires make more dramatic skids].

Don't forget, there was only so much work. It was very much a zero sum game. We were competitors. If Mike Monty did a job for US$1000 or US$1500, it very likely meant US$2K out of my pocket. I believe he often took the work at lower pay than me, if it was offered, just to survive. Usually K.Y. rotated the lead roles irrespective of pay levels, because he couldn't have all the films with the same unknowns as leads. But more than once Mike did jobs offered first to me, just because he was cheaper, or they wouldn't have to pay his airfare. I based myself out of HK because it was a much more mature economy, where it was actually possible to earn enough to save some money, and it definitely kept me from becoming perceived as one of the local bums, or ever falling completely to the producer's mercy.

Actually, I'm surprised you never seem to mention the likes of Don Gordon or Romano Kristoff, who were two other Manila ‘actors' who seemed to do a lot of work [maybe that's just because they never attained the notoriety of getting sucked in by IFD]. They were much better friends of mine than Mike Monty, and we had made an informal pact that we wouldn't work for less than US$2K for a lead in one of K.Y.'s films. Romano especially was the real deal. He was Spanish, ex Legion Etrangere, and a serious Martial Artist. He worked very hard at having a film career, and seemed to work a lot. The fact that he was able to survive full time in , without seeming to get stuck in the mire, was always a source of wonder and amazement to me…

Most of the local Caucasian extras in the were just unrepentant bums. They were often alcoholics and pot heads that had gone to the to chase cheap beer, pot and pussy, and ended up marooned in , too broke to scrape together enough to leave.

My impression was that most of them weren't that serious about film at all. It was just a stop gap, a way to earn a crust without taking a real job, which they couldn't get for lack of skills and/or a work permit. Often they had got some local girl pregnant and got mired in a cycle of guilt and responsibility, and couldn't earn enough to pay their way out of it. Understand, the are truly a third world economy. If you get relegated onto that economic level it is really hard to make enough money to extricate yourself, especially if you have created moral or financial responsibilities for yourself in that environment, or overstayed.

One of the biggest problems these guys used to get into was overstaying their visas. Legally it wasn't that bad, but to get an exit visa after you had overstayed, you had to pay a fine of 100 Pesos a day [US$5] for every day of overstaying. Foreigners couldn't get any straight job without a work permit, which were only issued overseas with lots of documentation, prior to arrival. So a lot of these guys were stuck in a vicious “Catch 22” cycle. They couldn't get a real job without a work permit and they couldn't earn enough to pay for their exit visa without a real job, and the fine mounted daily. The extras on those films were paid 100 pesos a day [US$5] plus room and board if on location [double occupancy in a bamboo shack without plumbing and all the fish and rice you can eat with a bottle of San Miguel]. That was the same they would pay the locals, who would be happy to take the jobs if they were fair haired enough to pass as Caucasians. Consequently there were a lot of down and out types working on these movies as extras [no work permit required] but they weren't making nearly enough to break the cycle.

The guys whose names you mention were certainly better off than the extras, but often not much from what I could see. Some at least pretended to take it seriously, as if they honestly believed that this was going to lead them into stardom, somewhere along the line. I think mostly they did it out of laziness, for the fun, the pussy, and the notoriety. Even the day players with lines only made about US$20/day. It's only enough to get by if you are living the vida local, eating fish and rice and staying in a shanty deep in some third world slum. But if that is the only job you can get you're screwed, because it surely wasn't like they could find work every day. A few days, a month at best.

Mike Monty worked hard at it and took it [a little too] seriously, I thought, considering how lousy the films were. I think he married a Filipina, at least partially to beat the visa problem. Jim Gaines, I think, was half Filipino, half American with dual citizenship. Nicholson, I think was in the mire. Romano Kristoff and Don Gordon, were writing scripts as well as acting, and trying to produce. Both were pretty seriously committed, not that it seems to have done either of them much good. If you take a look at their filmographies as published on the web, it seems all the work fizzled in the early ‘90s. Is anybody making these films anymore?

From Wikipedia: Emma Henry (died 1986) was a Filipino police officer whose exploits were the subject of two Filipino film biopics wherein she starred as herself.

Henry was arguably the first prominent female law enforcement officer in the . A police officer, she was proficient in judo and karate, sports not commonly associated with Filipino women in the early 1970s. As a police lieutenant in Laguna, she stood out in the male-dominated police force. In 1973, she was named as one of the country's "Ten Outstanding Policemen". She eventually became the first woman to be assigned as a police station commander.

Henry gained further fame after she agreed to play herself in a biopic on her life produced by Kinavesa Productions. Released in 1978, Emma Henry (Policewoman) showcased Henry's martial arts skills and was a success. 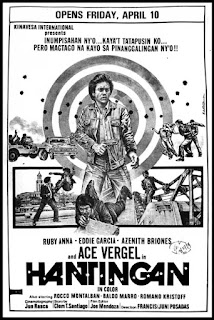 This film may have been dubbed for export as... 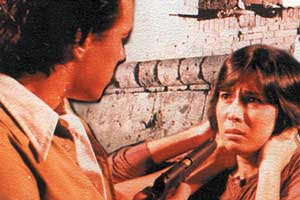 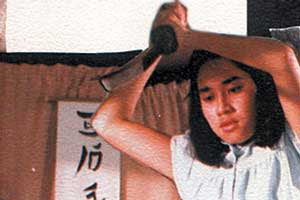