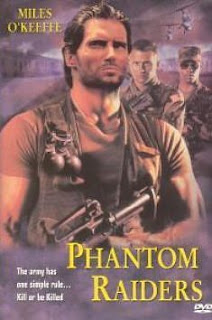 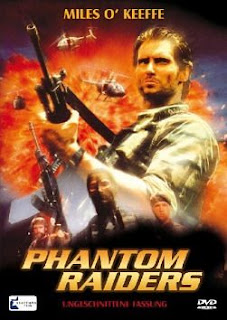 In this mindless Filipino actioner, the evil Colonel Marshall (Mike Monty) and his squad of terrorists capture a small platoon of American soldiers on a recon mission in modern-day Vietnam. The Colonel has his men kill all but one of the Americans when he pits them against his best fighters in a twisted booby-trapped arena, where the loser not only gets killed by impalements on spikes, but another tied-up soldier is machine-gunned to death when the winner trips a triggering device. The Colonel kills the last American himself, by setting him free and hunting him down in the jungle. An undercover photographer takes pictures of Colonel Marshall's terrorist training facility and passes the photos to a female operative just before the Colonel captures him and has him killed. The photos make their way to the CIA, where an official hires Python Lang (Miles O'Keeffe) to put together a team and either bring Colonel Marshall back alive or kill him if he's truly a traitor. Python hires three of his former buddies (who are now selling heroin in the private sector!) after promising them $250,000 each when they complete the mission (One of them says to Python when he finds out they are selling skag, "We need money to feed our families, not medals."). After Python and Howard (Colonel Marshall's son, who is also going on the mission) put the trio through comprehensive "special training" (a boobytrapped-filled jungle obstacle course mixed with martial arts training), the quintet travel to to begin their mission. They begin to slowly make their way to the Colonel's headquarters and meet resistance at nearly every turn. It almost seems like someone tipped-off the Colonel that Python and his team were after him. Is it possible Python has a traitor in his ranks?

When they finally get to the Colonel's training facility, Howard hopes for a touching reunion with Dad, but learns that his father is nothing but a cold-hearted bastard (His father says to him, "You may be a soldier, but you've got no guts!" when Howard hesitates and Dad gets the drop on him). Python ends up killing the Colonel and only he and Howard make it out alive. The other three members are killed, probably because they were heroin dealers back in the States. Really, did we expect them to live? While lacking any type of cohesive plot (We know that Colonel Marshall is a bad guy from the opening scene, so bringing him back alive isn't really an option, is it?) and the believability factor is thrown out the window the moment Howard is allowed to participate in the mission (Even I know that you don't send a relative, much less a son, on a mission such as this), this film should please Filipino action fans because it is nothing but a series of shoot-outs, explosions, spiked boobytraps and stealthy ninja-like action (including death by throwing stars, bolo and good, old-fashioned neck-snapping).

Director Sonny Sanders (His only directorial effort. He also co-wrote the screenplay to Jun Gallardo's THE FIRING LINE [1991]), who also co-scripted this with Timothy Jorge (scripter of Jun Gallardo's SFX RETALIATOR [1987]), supplies a non-stop series of action set-pieces, where people are shot (lots of bloody squibs), stabbed, impaled, blown-up or otherwise dispatched by other means. Buildings, vehicles and other objects also blow up at regular intervals. If you want a story, forget it, because PHANTOM RAIDERS is not that type of film (The whole film has about five minutes worth of dialogue!). If you like the sounds of guns firing, grenades exploding and rockets firing, you can't go wrong here. It accomplishes what it sets out to do: Be a mindless barrage of death (If I were to guess, I would estimate over 200 on-screen deaths), violence and macho heroics. Miles O'Keeffe (CARTEL - 1990; CLAWED: THE LEGEND OF SASQUATCH - 2005) has precious little face time here. He spends most of his screen time hiding behind a black nylon mask and I'm willing to bet that most of the time it's a stand-in or stunt double. The opening credits list no less than forty (!) actors' names and it's strange because not one of those names sounds Filipino (names like "Jim Hope", "Dick Curtis", "Gary Sampson"), yet 90% of the cast is plainly Filipino. One actor is seen wearing a "Getting Strong" tee shirt during the heroin transaction. 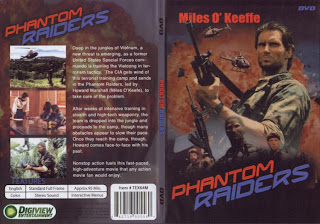 A Silver Screen International Production, not the famous "Silver Star Films" as it is erroneously listed on IMDB. Also starring Don Holtz, Jim Moss, Kenneth Peerless, Anthony East, David Anderson and Karen Roberts. Available on budget DVD from Digiview Entertainment. The synopsis on the back cover mistakenly gives O'Keeffe's character the "Howard Marshall" moniker, but the rest of the synopsis is pretty spot-on.