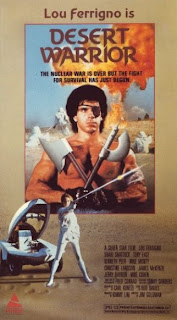 [NOTE: Carl Kuntze sent this email to Critcon Online website: “I didn't write the screenplay for DESERT WARRIOR (1988). I suspect Mr. K. Y. Lim, The Chinese Producer used my name to get a screening because he sold one I wrote. I did write BLACK MAMBA (1974), a film that was not shot seriously, but was used by the late actor John Ashley and late Philippine American director, George Rowe to get girls, ("I'm going to put you in pictures."). They saw something marketable after it was finished, but was uneven. I tried to patch it up as well as I could, difficult to do, because Alex David, also coincidentallly, a Chinese producer, was so disgusted, he did not want to put up any more money. I tried to get it from Dimension Films, but Larry Woolner had given a small advance to John Ashley, who couldn't deliver the film. David kept the negative in his office, chilling it in the daytime, then baking it at night when the air conditioning was turned off. I had no idea BLACK MAMBA was sold until I saw your review. He stiffed me my 10%. How did the print look after such maltreatment? Never mind content, they were screwing around throughout the production. Is it worth the US $ 20, or should I just flush the money down a toilet?” 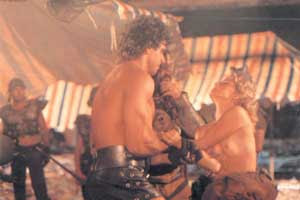 Holy fuck! This is one truly terrible film. So terrible, in fact, that it could quite possibly be one of the most unintentionally entertaining movies ever made. On a post-nuke Earth, the world is ruled by evil warlord Baktar (Kenneth Peerless, here using the pseudonym "Kenneth Peer"), who stages gladiator fights in a miniature Thunderdome-style arena. Running out of fresh food and water, not to mention everyone is slowly dying of radiation poisoning (Baktar's attempt at getting women pregnant results in mutant babies), Baktar sends out his top warrior, Zerak (Lou Ferrigno, who isn't dubbed), to search for a woman who is not contaminated by radiation. That woman happens to be Racela (Shari Shattuck; THE NAKED CAGE - 1985), who is a member of an advanced race of humans called The Drones, who have lived underground since the nuclear bombs fell and therefore are radiation-free. Racela grows tired of living in caves and comes to the surface without permission to blow-off some steam. She is promptly captured by a tribe of mutant ninjas (!), but is soon saved by Zerak. As soon as their eyes meet (well, in Zerak's case, eye, since he wears a black patch over his radiation-scarred left eye), it's love at first sight. 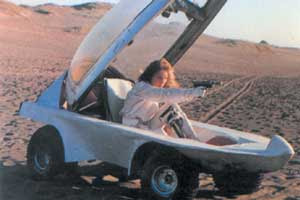 Meanwhile, Racela's father, Cortaz (Anthony East; FAST GUN - 1987), obtains permission from the Drones president, Antarius (Mike Cohen), to go to the surface to look for his daughter, but he is warned that if he decides to return to the Drones society, he and everyone he brings back will be executed (they don't want to be contaminated with radiation). As Racela tends to Zerak's battle wounds and nurses him back to health, Cortaz and his group of laser pistol-equipped soldiers begin the search for Racela, first running up against a tribe of mutant pygmies and then battling a tribe of radiation-scarred spear-chuckers. Racela and Zerak trek on foot through the blazing hot desert and just when it seems all hope is lost, they are rescued by Baktar, who plans to mate with Racela and bear normal children (Never mind that Baktar is contaminated. It's best not to dwell on those plot points.). This doesn't sit too well with Zerak, who reunites Racela with her father and send them on their way. Racela refuses to leave Zerak behind, so she steals one of her father's bubble-domed dune buggies and heads back to Baktar's village to free an imprisoned Zerak. She brings Zerak back to Drones headquarters, not aware of the death sentence imposed on all returnees, but they are both saved by Drones scientist Dr. Crea (Mike Monty), who has developed a serum that reverses radiation poisoning (He first uses it on Zerak and we watch as his mutant left eye returns to normal). Trouble ensues when Baktar and his men show up at the Drones' front door and a battle breaks out. Zerak then does something so fucking unrealistic to end the fight that I had to rewind the tape just to make sure I wasn't hallucinating. I wasn't. I have the feeling that we're either dealing with a demented genius or a clueless idiot in one-time director Jim Goldman. This Philippines-lensed film, produced by Hong Kong's Silver Star Film Company, is so poorly made and badly acted (Ferrigno has never been worse than he is here), I'm beginning to believe that Jim Goldman (who has no other credits in the motion picture industry) is actually a pseudonym for a Filipino director (Willie Milan [CLASH OF THE WARLORDS - 1985] would be my best guess). The film is full of many badly-staged action scenes, where the stuntmen can plainly be seen anticipating the explosions around them (yet they still are a good microsecond or two late in jumping in the air!) and laser gun battles where the optically added laser beams hit many people but they don't react. This flick is hilarious for it's many distractions, from the flubbed lines (no second takes here), badly recorded sound, fight scenes that look as if they were choreographed by someone with cerebal palsey and Lou Ferrigno's incredibly lame line readings (yeah, I know he's deaf but, c'mon people, he's simply awful). 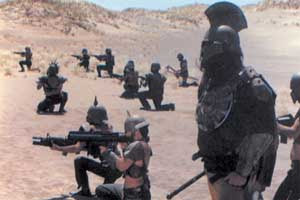 This is a total embarassment for everyone involved and is enjoyable for that fact alone. Watching this film is like passing a bad accident in your car. You know when you slow down to look at it, you may not like what you see, but you just can't help yourself. DESERT WARRIOR is one of the best train wrecks ever committed to celluloid and is a treat for all badfilm fans. You gotta love a film where Lou Ferrigno's Zarek says to Baktar in the finale, "Let me give you a hug!" and then does so, ending the final battle in a peaceful manner. Un-fucking-believable! The cliche-ridden script was written by Carl Kuntze (BLACK MAMBA - 1974) and Bob Davies, who definitely watched too many MAD MAX and STAR WARS rip-offs before penning this. Sonny Sanders (PHANTOM RAIDERS - 1988) was the Assistant Director. Not to be confused with Enzo G. Castellari's TAUREG: THE DESERT WARRIOR (1984), starring Mark Harmon. Also starring Jerry Bayron, Tony Young, Jim McKensie, Ernest Olsen, Christine Landson and Don Holden. Originally released on VHS by Prism Home Entertainment and not yet available on DVD. Rated PG-13, but don't let that put you off. There are several instances of topless female nudity and enough carnage (including Baktar grabbing a girl by her hair and ripping the top of her scalp off to prove she's a mutant) to keep you pleasantly surprised.
Posted by Unknown at 3:14 PM