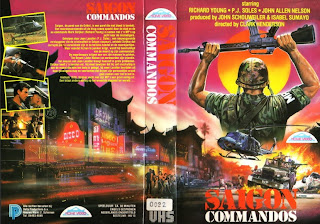 This film spends little time addressing the Vietnam War, even though it takes place in during the year 1970. This film spends most it's time dealing with the exploits of a group of MPs, led by Sgt. Mark Stryker (Richard Young; FINAL MISSION - 1984), as they deal with a city that's so corrupt, it's nearly impossible to get anything done. Sgt. Stryker and his men not only contend with a serial killer dubbed the "Hollowpoint Killer" by the press (due to the type of bullet the killer uses), they also have to constantly keep the peace between the American occupation and the locals who resent their presence. Tensions are so bad, some locals slit the throat of Sgt. Tim Bryant's (John Allen Nelson; KILLER KLOWNS FROM OUTER SPACE - 1988) Vietnamese girlfriend while he watches. The appearance of Associated Press reporter Jean Lassiter (P.J. Soles; HALLOWEEN - 1978), who is assigned to ride along with Sgt. Stryker, only makes his job more difficult. When the Hollowpoint Killer, who has murdered ten Vietnamese locals, kills his first American victim, the pressure is put on Sgt. Stryker to find him and find him fast. Complicating matters is when Tim, who is grieving the loss of his girlfriend, turns rogue and begins murdering locals in retribution. Not anonymous locals, mind you, but prominent, influential locals. Sgt. Stryker, who had an opportunity to bring Tim in, but let his personal friendship with him get in the way, is framed by Col. Tranh (Joe Mari Avellana) for the death of Stryker's commanding officer (Frederick Bailey). When a lynch mob of locals try to grab Stryker as he is taken into custody, he escapes with the help of Jean and some of his MP buddies. He then sets out to clear his name, stop both Tim and the Hollowpoint Killer and bring Col Tranh and his men down. To do that, Stryker gathers all his Special Forces buddies together (he first has to rescue them in the jungle while they are under heavy enemy fire) and they then begin to lay waste to . When a nun and some orphans are killed by a sniper, the locals blame Tim, but Stryker knows better. The sniper is actually working for Col. Tranh, who is also responsible for the Hollowpoint Killer. Col. Tranh hopes to get the locals so riled up that they force all Americans out of . The sniper then kills a bunch of Buddhists and tensions reach the boiling point. When Jean is kidnapped, Stryker and his men swing into action and save her. The finale takes place at an anti-American rally, where Tim has the rally's leader, Nguyen HuuTri (Joonie Gamboa), in his sights. Stryker must settle with Tim, the Hollowpoint Killer and a corrupt political system all at the same time before the film concludes. This is a halfway decent actioner that also attempts to address the difficulties the American occupation had to endure while living amongst people quite different than us during a time of war.

While far from perfect (there's evidence of post-production tampering by adding narration by Richard Young to walk us through some scenes, which were probably never finished or didn't contain enough footage to survive without an added explanation), director Clark Henderson (who also gave us the god-awful WARLORDS FROM HELL [1985] and the so-so PRIMARY TARGET [1988]) at least tries to deliver something different, mixing action, mystery, political intrigue, corruption and racial tensions into a heady little brew. You've got to admire a film that opens with a Vietnamese rock band (actually Filipino group "The Eurasia Band") grooving to "House Of The Rising Sun" and "Midnight Special" while a group of American GIs (led by Nick Nicholson) and Vietnamese locals face-off in a bar. The script, by Thomas McKelvey Cleaver (THE SISTERHOOD - 1987; THE TERROR WITHIN - 1988), is much more political than most films in this genre and the backdrop of cultural differences does manage to generate some genuine suspense. This film also tries to play fair with both sides of the political coin. Scripter Cleaver portrays the occupying American forces and the native Vietnamese as flawed human beings with passions that turn out tragically for both sides. Sure, there are villians here, but most of them pay for their sins with their lives. Tim's death is probably the film's most dramatic, kind of what law enforcement calls "death by cop", where Tim leaves his buddies no choice but to kill him, even though his sniper rifle is out of ammunition. To Tim, this is a hero's death. He would rather his friends kill him then spend the rest of his life in prison. Director Henderson fills the film with plenty of bloody bullet squibs (including scenes of children getting killed), explosions, chases and nudity, so action fans will not be disappointed, but this film has loftier ambitions than a straight-ahead action flick. Give it a try. If I didn't know better, I would say that Filipino director/producer Cirio H. Santiago had a hand in this (it's full of his people, both in front and behind the camera), but his name is nowhere to be found in the credits.