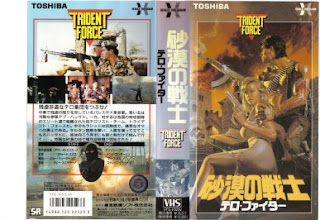 [Listed on the end credits as “The Ultimate Solution” – possible alternate or working title?]

“Trident Force!!! Holy Jeebus!!! We did that a long time ago. Our director was Maria Sarret, and our 1st AD was her son Sonny Sarret. ANNA was the acronym for Anthony, Norma, Norma, Alex. Anthony Alonzo (died from AIDS), Norma Gaerlan (if she is still alive she is in Oz someplace), Norma Escano and Alex Escano. Norma and Alex's son Allen Escano owns Road Runner Studio in QC. The Escanos are uber rich! They all come from and have mining and shipping lines. That was perhaps one of the most bizarre film shoots I have ever been on.

“The Gaerlans are a mixture of Spanish and Indian. Ed is Norma’s uncle, others are brothers, nephews and only God knows what! We ended up without a caterer – Norma, she had some sort of illness that ate her tissue. She was in a wheelchair and a real battle axe.

“It was almost like shooting a movie with the Adams Family! Norma was confined to a wheel chair. She had something like leprosy. It was eating her fingers and toes away. She was a real firecracker though. She made sure all of her relatives were involved so that they could suck every cent out of the production. She needed Anthony in a bad way. He was her Joker Card with the Escanos. To keep him happy, she encouraged her 18 year old nephew to hang out with Anthony (he was a Top Gay!) The kid later complained to me that his asshole had become like a pork rind! I think you get the picture. Every day was filled with conflict! I thought I had actually crossed through the Twilight Zone into another dimension. One day I was getting ready to wrap a bunch of extras and I had their vehicle on standby. Ed wanted to use the vehicle to go to to drop off a crossword puzzle entry for some dumbass contest. The extras would have to have waited for around 4 hours for the damned jeep. I didn't let him use it, so Ed and Norma threw a hissy fit. Anthony tried to threaten me with bodily harm, and I responded by calling him out. He backed down and they spent the rest of the day pouting and whispering evil plans...

“Towards the end of the shoot, Norma and Maria were absolutely at war with each other. We snubbed the wrap party and fled to from Tagaytay.

“A couple of months later something even more disturbing happened. Norma had a maid who had a 4 year old son with her at Norma's house. Also living at the house was another nephew who was a Bakla. The Bakla was wired on crank. One night with a full moon, the Bakla stabbed the little boy 13 times in the neck, nearly decapitating the child. He then stuffed the body under the bed in the maid’s quarters.

“Now get this... Tony Ferrer has a mistress and she is none other than Norma's sister Diana!”

Knee deep in Middle Eastern explosive dung a corps of the British army do an as they fortify a military holding in a desert terrain. The last day of their duty and it rains rebels with activist intent and a death to the Western culture look in the eye. An American photo journalist is caught up in the battle but she continues to do her job and on more than one occasion gets too close to the front line. Watched over , and repeatedly rescued by a mixed parentage British soldier named Rashid , Lesley Prentice later turns out to be more than a shutter shooter with long legs. This opening sequence is an explosive introduction to ‘Trident Force’ that lasts nigh on twenty minutes before the credits even role! It’s bazookas against berets and a stiff upper lip British attitude with amusing dialogue to go with it , ‘‘Hey boys we got us a camel jockey here’’. The Action is fast and furious though and has more than the odd head shot following a bloody squib throwback to surprise.

Reinforcement arrives in the form of a battle readied fighter helicopter and the on board big gun soon mows down the enemy below. Now that’s the way to begin an Action movie! Things jump about a bit for a while as the headlines tell the tale of worldwide terrorist activity that springs from to . A startling scene involving a sexily black leather clad female motorcyclist hits home the events portrayed across the news reels as her mission ends as a suicide bomber. The Israili ambassadors residence in is also hit by a killer who coldly slaughters an entire family by gun. All in the name of The Palestinian Revolutionary Legion. A new organisation is called for to address the terrorist situation and Rashid is called upon to undertake the gruelling training camp to be a part of The Trident Force. His British commanding officer, Colonel Hawthorne from the desert operation, reunites with him along with Lesley Prentice who is revealed to be working for the C.I.A.

Boot camp is a bigoted ballywhoo where Rashid’s mixed heritage comes into question and sees him singled out by bullying hick drill instructor Ox , played brilliantly by Filipino resident film regular Nick Nicholson. Their relationship is a turbulent one, but one that by the end of the course turns into mutual respect. The training regime is brutal but teaches the unit commando tactics and techniques, along with bomb disposal skills and rescue scenarios. The course involves the use of real ammunition rounds and overcoming lethal set traps. Only the strongest and best survive to become the proud wearers of the red beret of The Trident Force. It’s a testosterone runaway train of an Action movie that spits bullets and bleeds red berets. The kind of movie you know you expect to be entertained by and it doesn’t let you down.

Gleefully for continued viewing plus points Nick Nicholson’s character Ox decides that he now digs Rashid so much that he wants to take on the mantle of a red beret soldier himself and is honoured into the ranks of the Trident Force. The turkey shoot camp closes up shop and the new elite corps are open for business. Their coinage is wrapped up in a full metal jacket and it’s the terrorists who will pay dearly. Prepare to wear a smile as the ‘B’ movie brilliance here on in is propelled into ballistic overdrive. Terrorist leader Abu Hassad is top of the teams hit list and leader Colonel Hawthorne gives the order to lock and unload! It’s not just the rapid fire smile enducing dialogue that hit’s the funny bone, look out for a groovy rendition of spin the skull with a gloriously tacky pointy arrow that calls upon Allah to pick out a traitor. Honestly ‘Trident Force’ could single handedly have been the inspiration behind Trey Parker and Matt Stone’s puppet parody ‘Team ’. A world delegation conference sees the Trident Force immediately called into action as the terrorist faction gate crash the gathering. They dispense of the threat using their combined commando honed skills and the Eastern activists are dealt with, sending a message to Abu Hassad that the free world has a new policy and its enforcers are called Trident Force. With balls bigger than an elephant with mumps this is low budget Action at its most gregarious and its energy level is infectious. There’s always room to amp up those levels though and when Rashid is sent the head of his brother in a box he snaps. Revenge is a dish best served up by a red beret waiter kitted out in Rambo threads and readied to spill the arterial vino! Prepare for a barn storming conclusion where the bullets fly and bodies bleed, all to the tune of a one man wrecking crew. Majorly explosive stuff, and more carnage than a free day at K.F.C when chicken is off the menu. Yes siree its that ‘Plucking’ good!