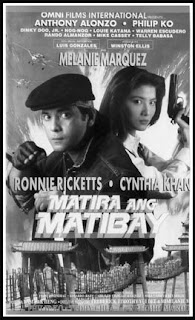 Cynthia Khan is a Hong Kong police officer hot on the trail of a supermodel who has stolen a "precious thing" from and is trying to sell it in . Sure, she's a rather unattractive supermodel (wear enough makeup and anyone can be a supermodel), but she can fight fairly well. In Manila Ms. Khan hooks up with a goofy, but kind-hearted cab driver (Ronnie Ricketts) who likes to box in his spare time. I bet he'll come in handy... At the end of the movie, she also joins forces with a mainland cop played by Sharon Yeung, but her scenes seem pathetically out of place, like they were originally shot for a different film. The good guys finally prevail after a laughably excessive exchange of firepower.

This film looks pretty good for a low budget Filipino effort. Cynthia Khan looks great and her outfits are extremely cute. Unfortunately, her fighting scenes are only average, and are occasionally spoiled by some embarrassingly poor wire stunts. Sharon Yeung's brief fight scenes are good, but she doesn't even look like she's in the right movie. And you know you're in a low budget movie when high and mighty crime lords drive the Ford Mustang II as their vehicle of choice.

Between 1990 and 1995, the film industry was booming, and lots of low-budget producers were jumping on the bandwagon. It was during these years that a new sub-genre of films was born, that I like to call ‘the Angel series’. These were low-budget action movies that ripped off the Michelle Yeoh films by featuring various female stars in leading roles kicking ass on the bad guys. I’m talking about films like ANGEL MISSION, ANGEL TERMINATORS, ANGEL OF VENGEANCE, etc. These films are not sequels and don’t have much in common, other than hot Hong Kong actresses in starring roles. ANGEL ON FIRE was actually filmed in the in 1995, and was carefully produced to look like a film. Tai Seng has recently released ANGEL ON FIRE on their budget HK DVD line.

ANGEL ON FIRE is directed by director (and former action star ) Philip Ko, who also has a feature role in the film as a gang leader named Rocks. Cynthia Khan, best known for the IN THE LINE OF DUTY series, takes top billing as an unnamed Interpol agent, who goes undercover to catch a thief. Waise (13 COLD BLOODED EAGLES) Lee plays Su Chin, the Interpol chief who gives her this assignment. Sharon Yeung plays another Interpol agent named Wong Li, who joins Cynthia Kahn’s character uncover.

Mimi is a former-model turned thief. She breaks into a Shaolin temple and steals an ancient relic. She is caught in the act by the monks, and they chase her through the streets of on bicycles. She is then picked up by helicopter, which is piloted by the gang leader who hired her to steal the relic, Rocks. Mimi tells him that she was caught in the act and wasn’t able to get the relic. Meanwhile, Interpol chief Su Chin (Waise Lee) assigns one of his top agents (Khan) to go undercover and capture Mimi and recover the relic, no matter the cost. He informs her that she will be joined by another under cover Interpol agent named Wong Li.

Rocks accompanies Mimi to the headquarters of a crime boss named Tony. Tony hired Rocks and Mimi to retrieve the relic, but Rocks betrays them both and steals the relic at gunpoint. Rocks is actually loyal to a different crime boss who wants the relic. What Rocks does not know is that the statue he possesses is a fake; Mimi still has the original. Rocks' boss is furious when he finds out he has a fake relic, and threatens to kill Rocks. At the airport, Cynthia Kahn meets a goofball taxi cab driver named Harry, and they attempt to follow the suspects, but the taxi breaks down in the middle of nowhere. Cynthia and Harry become fast friends, and she calls on him again for her transportation needs.

Harry tells her he is a boxer, and asks her to go to one of his fights. The fight turns out to be one of the illegal pit-fighting affairs, held by the crime lord that is desperately trying to acquire the relic. Harry has to fight a massive fighter from called Black Leopard. The mean African fighter clearly has the advantage, but Harry manages to outsmart the Black Leopard, and he and Cynthia flee the illegal fight.

Mimi has managed to avoid capture and retain the relic. She goes to a huge field with a large circular electrical tower to make the switch and get her payoff from a third party buyer. Things get a little complicated when Tony and his men show up. Tony goes on a tirade saying how hurt he is she betrayed him (apparently they had some romantic thing going on). Just as Tony is about to kill Mimi, Rocks arrives with his own battalion of thugs, including the Black Leopard. An all-out war erupts between the gangs for possession of the relic. Cynthia and Harry show up and join the fray. Then undercover Interpol agent Wong Li arrives to assist them. But how can three people stop an explosive gang war?

Director Philip Ko wrote the script, directed, and acted in ANGEL ON FIRE. The only positive thing I have to say about Mr. Ko’s talents, is that he is a decent character actor. This film is very bad, even by B movie standards. Some films are so bad, that they are entertaining (like MIGHTY PEKING MAN or PLAN 9 FROM OUTER SPACE), but this is just plain bad. The script is terrible, the direction and production is without any style or flair, the characters and acting are atrocious (except for some of the character actors portraying the crime lords). Ko does not know how to generate any suspense or tension, or give us any characters we can care about.

Cynthia Khan is graceful in ANGEL ON FIRE. She kicks butt and looks good doing it. Though she mostly uses her martial arts skills to beat the bad guys, she does resort to firearms a few times. She is an underrated actress, but you would never now it from this film (I still can’t believe she slummed in this production). Sharon Yeung is looking butch and showing her age. But she can still move like a limber young panther. Her role is limited, and she just shows up at the climax to help Cynthia Khan fight the rival gangs.

The film chugs away at a snails pace, until the last thirty minutes or so. Despite the ineptness of the entire movie, the last act delivers some excitement and violent action. Two gangs do battle over who will keep the relic, and our heroines help take down thugs from both gangs. The battle ground shifts to a small airport where things get crazy when the gang leaders take to the sky. Tons of rapid-fire, machine-gun action, exploding grenade launchers, and endless kung-fu fights finally bring the film to life for a little while. This climax still does not justify having to sit through the entire movie though.