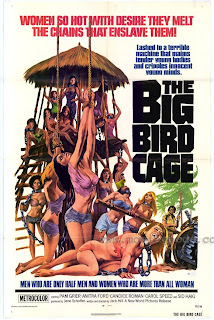 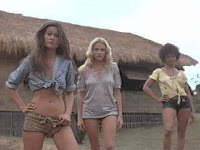 Jack Hill returned to the in 1972 with an evolutionary step in WiP films, the more playful and, one can argue, more experimental The Big Bird Cage. This time Hill wrote the script and amplified the elements in The Big Doll House that worked best: black humour to balance the nastiness, crass and deliriously absurd one-liners delivered with stone-faced conviction, and the unmistakable chemistry between Pam Grier in Sid Haig, who shared some memorable exchanges between the bars in their previous effort. In The Big Bird Cage, Sid and Pam return as a Symbionese Army version of Ozzie and Harriet, or in this case Django and Blossom, tearing around the countryside inflicting their swinging brand of revolution. They attempt to kidnap Terry (Anitra Ford), a bored American thrillseeker who’s been schtupping half of the government, but it goes horribly wrong, and instead Terry is sent down the river – literally - to keep her quiet. 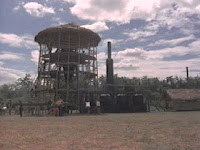 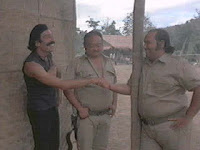 In a remote jungle location she enters a womens’ compound ruled with an iron fist by the angry gnome Warden Zappa (Eddie Romero regular “Andy”/Andres Centenera), constantly on the point of exhaustion screaming “Punishment! Punishment!” His two homosexual guards (one played with tittering, fruity menace by Vic Diaz) escort Terry past the Big Bird Cage itself, an intricate bamboo sugar mill used more often than not as an instrument of punishment, its victims crushed between its giant cogs. As the “New Pig”, she expects to be released any moment, but instead finds herself strung up by her hair and left as a warning. Blossom, meanwhile, botches an assassination attempt and finds herself in the same hell-hole, and immediately tries to take over as Top Dog (“It’s MISS Nigger to you!”). Django decides to liberate Blossom and the other caged birds – for the Revoution, you understand – and minces past the love-struck guards in uniform. Before you can say “Than Franthithco” he’s unleashed a prison full of willing revolutionaries who, in the ultimate twisted expression of sexual liberation, rape Vic Diaz at knife point. 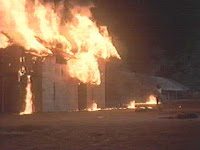