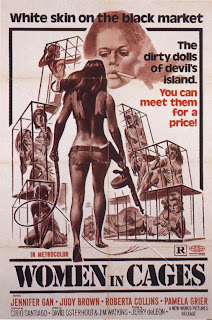 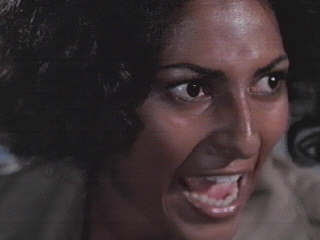 Corman’s second Filipino WIP picture Women In Cages (1971) sees Pam Grier in a much meatier role as Alabama, the vicious pot-smoking lesbian prison matron with a chip on her shoulder the size of Harlem, pitting (and bedding) one prisoner against the other for her own sadistic amusement. In typical Corman fashion, the race tables are turned so that the embittered ex-addict and prostitute assumes the position of slave owner, watching her white charges toiling away in the sugar plantation with obvious ironic glee. The REAL punishment is reserved for the “Hole”, an underground tank swimming with leeches, or the “Playpen”, ’s personal torture chamber with its own guillotine. 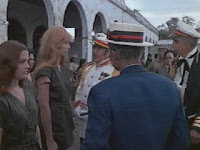 Into the hellhole comes blond ditz Carol Jefferies or “Jeff” (the uniformly unmemorable Jennifer Gan) who’s unwittingly takes a heroin rap for her less-than-chivalrous boyfriend Rudy (Charlie Davao). As the owner of a floating whorehouse Rudy doesn’t need any more heat from the drug squad’s Detective Acosta, so he orders Jeff’s junk-sick cellmate Stoke (The Big Doll House’s Roberta Collins) to keep her mouth sewn shut permanently. Acosta, meanwhile, is putting the heat on Jeff to testify against her boyfriend but she won’t budge, and even breaks out of prison just to be with him, thus lifting the flailing drama out of its prison pen rut, through a much-needed jungle sequence and into a downbeat finale at Acosta’s cathouse. 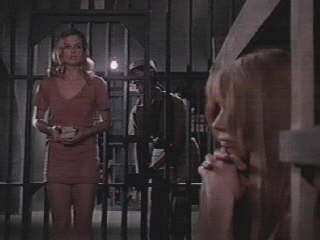 Drab, sour and just plain ugly, Women In Cages is a real disappointment from the usually meticulous de Leon. Location sound is a living nightmare, and ’s post-production team was too lazy to dub the sounds of a fist fight. Its characters are poorly drawn and swimming in uninspired dialogue; Roberta Collins (also in The Big Doll House) plays the cell’s alpha female Sandy and is always in top form, but it’s clear Pam is still learning her chops and is just not convincing as a tough-as-nails character, instead coming across as a kid playing at grown-ups. Other than a few well-placed camera shots, without Hill’s nonsensical flourishes the Big Doll House reunion limps along and barely registers as more than another anonymous WIP screen-filler. 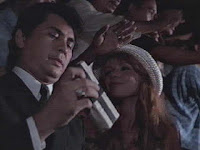 In fact there appears a deliberate attempt on Corman’s part to disguise its Pinoy heritage: acting heavyweights “Bernard Bodine” (Acosta) is actually Bernard Bonnin, while Charlie Davao as “Charles Davis” is anglicized out of existence. To add insult to injury, Marissa Delgado (Juana), Paquito Diaz (Jorge) and Sofia Moran (Theresa) – three superstars of Tagalog cinema acting in substantial roles - aren’t even listed in the credits.