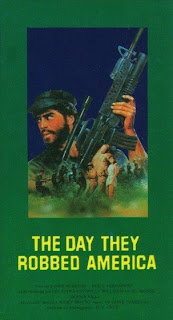 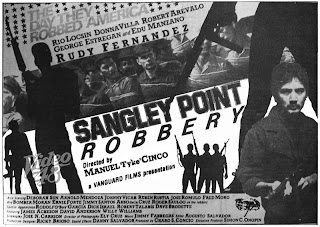 Outlandish Philippines-lensed production that's pretty hard to categorize. It's part war film, part heist film and 100% off-the-wall. The film opens up with soldier Duke Carson (James Acheson) watching VC soldiers shoot his nurse girlfriend when he refuses to answer their questions (He screams out a long "Nooooooo!"). The film then switches to a hostage situation at a restaurant where cop Robbie (Rudy Fernandez) shoots and kills hostage taker Junior. Junior's father Martin (Robert Arevalo), a local crime lord, retaliates and sends his men to kill Robbie, but they mistakenly shoot and seriously injure his father instead. Robbie quits the force and decides to go after Martin on his own. Meanwhile, Duke is reassigned to an American military base as an MP, close to where Robbie lives. Robbie's friends plan to rob the Bank of American Express on the military base and they want Robbie to join them, but he declines. Duke gets into a fight with local gunrunners at a bar where Robbie is having a drink. Robbie notices Duke's fighting abilities and compliments him on them. When Robbie learns his father is going to need an expensive operation, he has no choice but to join in on the bank robbery, but he brings in friends Boiler (a marksman) and Sausage (the brawny muscle) for extra insurance. Martin has his men burn down Robbie's house, nearly killing his wife and kids. Robbie grabs a machine gun and systematically begins gunning down Martin's men, nearly missing the robbery start time. They finally perform the robbery, sneaking into the military base disquising themselves as sandwich men. As they are robbing the bank, they are caught off-guard by Duke and the MPs, which leads to a shootout (Boiler, the marksman, is the first to die) and a hostage situation. Duke's new girlfriend Carol (Donna Villa), a bank teller, is taken hostage by Ronnie, which leads to a short car chase and another shootout. Duke rescues Carol as Ronnie and his gang disappear into the jungle. Robbie buries the money and disappears, as Duke goes commando and begins killing all the robbers one-by-one. The finale finds Duke and Robbie shooting it out and neither one comes out unscathed.

More plot-heavy than most Filippino action films, this flick (set in 1971) still has it's share of violent action setpieces, once the robbery starts. Until then, we are treated to Duke's numerous flashbacks to his dead girlfriend (he usually has them while trying to romance his new girlfriend!), various subplots involving gun runners trying to kill Duke and Martin trying to kill Robbie (who is credited as "Ruben" in the final credits). The funniest scene happens when Robbie's father is shot. Robbie stops a Jeep containing three American soldiers and asks for help, but they refuse! There are plenty of shootouts (lots and lots of bullet squibs), outrageous dubbing ("If he talks now, we're all in the shit!") and very unflattering depictions of the American military complex. I also love how Robbie has a mistress and the film seems to imply that there's nothing wrong with it. Another funny (and shocking) scene comes near the finale as Robbie is trying to drive to safety with his mistress in the car. With the sound of sirens and the glare of flashing lights in the background, she says, "Robbie, someone is following us! Maybe it's the police!", just before she gets shot in the back and dies immediately! While lacking the sheer lunacy of FINAL SCORE (1986) or the non-stop gunplay of other Philippines-lensed action flicks, THE DAY THEY ROBBED AMERICA still contains enough head-scratching action to get my recommendation. Directed by Manuel 'fyke' Cinco (REVENGE FOR JUSTICE - 1985). Also starring Rio Locsin, Edu Manzano, Bomber Moran and appearances by such Filippino mainstays as George Estregan, Nigel Hogge, Nick Nicholson, Willy Williams and Rudolfo 'Boy' Garcia. Available on DVD from Eastwest DVD as a double feature disc, with the film FINAL ASSIGNMENT (1980).
Posted by Unknown at 9:22 PM