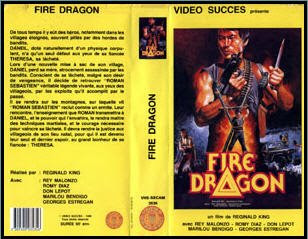 Another outrageous actioner as only the Filippinos can make them. After a successful raid on a jungle hideout where Ramon (Rey Malonzo starring as "Raymond Malonzo") and his Army cohorts save women hostages and kill all the guerrillas (including Ramon's amazing acrobatic backflip off the side of a cliff where he shoots the head guerrilla square in the face while in midair!), Ramon is called to be by his mother's side in the hospital. Before she dies, she makes Ramon promise to quit the Army. Torn about his promise, Ramon decides to take his wife and son on a vacation to visit his old hometown and his Uncle Jose. As soon as they get into town, Ramon gets into a fight with a bunch of street thugs, simply for asking directions. Ramon soon discovers that his old hometown is now under the strict rule of Cmdr. Falcon (George Estregan as "George St. Reagan"). Every family must pay their "taxes" (which include their virgin daughters for sale to the slave trade) to Falcon. If they don't, the men will be beat-up (or killed) and the women raped. It's not long before Ramon is knee-deep in shit as the police chief is too scared of Falcon to be any help. Ramon takes on Falcon and his gang single-handedly and suffers a great personal tragedy in the process. Shamed into action (by Ramon's son), the police chief and the town spring into action to save Ramon (who for some reason is now called "Cmdr. .45").

Viewed as a companion piece to 1984's SEARCH FOR VENGEANCE (which was also directed, like this one, by star Rey Malonzo using the pseudonym "Reginald King"), CLASSIFIED OPERATION is the weaker of the two, but not without it's charms. Besides the already-mentioned cliff stunt, there's also an hilarious scene where Ramon shows his quickdraw skills on a gang of gun-toting goons. The incidental dialogue (by screenwriter Arthur Simon) is also a hoot. When a gang of guerillas is walking through the jungle, one can be heard saying, "I killed four men today," like it was a normal thing for him. When Falcon is interrupted while fooling around with two women, he turns to them and says, "Keep it hot while I'm gone. OK?" There's also plenty of hand-to-hand combat (with exaggerated sound effects), numerous gun battles (Ramon likes to shoot people in the face for some reason) and too many explosions to count. Hey, this isn't Shakespeare, but it sure as hell isn't boring. Try not to smile as Ramon does the final barrel-roll stunt with the succession of .45s lying on the ground.