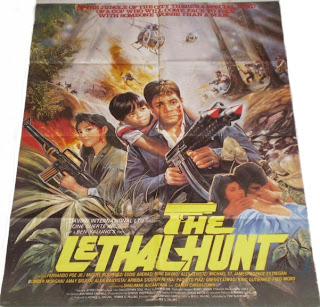 Here's a little-seen Filipino actioner that's bloody as hell. Police detective Ben Serrano (Fernando Poe, Jr.) and his partner break up a robbery in progress, which results in Ben's partner being killed when he takes a shotgun blast to the face (Just before he dies, he says, "Ben, I'm not feeling good. I'm so badly wounded! Well, tonight I will not be able...to taste your wife's cooking!"). Ben gets even by shooting all the bad guys in the head, but he gets shot in the arm when one bad guy turns out to be not as dead as he thought. As he is recuperating at home (where his nagging pregnant wife begs him to quit the force), he is attacked by some more bad guys dressed as garbage men (When Ben asks one of the guys why he is knocking on his front door to collect the garbage, the bad guy replies, "We've improved our service!). Ben manages to shoot all the bad guys (one even takes a bullet to the groin) as his wife cries uncontrollably. Back on the force, Ben gets into a car chase/shootout with a bunch of robbery suspects, which results in Ben crashing into a Mercedes Benz containing rich bitch (and Mob connected) Dona Lucila (Armida Siguion-Reyna) and her daughter Leslie, who is killed in the crash (Dona Lucila orders her driver to run a red light, by saying, "It's only a foolish old red light!", so the crash is really her fault).

Dona Lucila uses her money, family and influence to exact revenge on Ben, paying off a top cop to lie in court so Ben gets convicted of vehicular homicide and is sentenced to twelve years in prison. To cover her tracks, Dona Lucila has the lying cop killed after the trial is over so he can't recant his testimony. While in prison, Ben's wife dies while giving birth to a baby boy. Two years later, Ben is paroled from prison for good behavior, which doesn't sit too well with Dona Lucila. After firing her lawyer, Dona orders her people (including her sons) to kill Ben, but he has moved from busy Manila to his brother's farm in a small town in the mountains, where he hopes to raise his young son, Rico (Jeffrey Picar), in peace. As you can probably tell, that's not going to happen. Not only does Ben have to deal with Dona Lucila and her goons, he must now contend with evil Mayor Ledesma (George Estregan), since Ben's brother is running against him for mayor in the upcoming election. When Ben's brother and dozens of his supporters are viciously gunned-down in an ambush, Ben puts away his newly-acquired pacifist ideals and straps on the guns again, looking for some well-deserved revenge. By making the chief villian in this film a woman, director/co-scripter Ben G. Yalung (ZUMA 2: HELL SERPENT - 1987) has crafted a memorable, if ludicrous, action flick that contains plenty of bloody violence (mostly of the bullet kind, although one guy gets a spear through his neck and another gets one in the gut) and even more badly-dubbed hilarious dialogue. Dona Lucila is a bloodthirsty broad who holds grudges for life, even though she's chiefly responsible for her daughter's death. She has no problem putting her own sons in harm's way to achieve her revenge.

Long-time Filipino film star Fernando Poe Jr. (LANGIT AT LUPA - 1967; ANG ALAMAT - 1971; LITTLE CHRISTMAS TREE - 1977; ANG PADRINO - 1984; MUSLIM MAGNUM .357 - 1986) spends a good portion of his screen time shooting people in the legs or head (some bad guys get both) or grieving over the loss of loved ones, but he does have a screen presence that can't be denied. I can see why he was one of the ' most beloved actors (where he was affectionately nicknamed "Da King") for over forty years until his death in 2004, the same year he ran for President of the and lost in a highly controversial election that brought a public outcry of fraud. This film's best and most tense scene comes when a drunk Greggy (Greggy Liwag), Dona Lucila's son, tortures a tied-up Ben by playing a game of Russian Roulette with Ben's son, Rico. Since this is the , you don't know what the outcome will be (they have no problem showing kids being killed on-screen), which makes the following few minutes a nail-biter. Thankfully, things turn out for the best (Ben breaks free and puts a bullet into Greggy's forehead) but, a few minutes later, Rico's life is threatened again, this time by a (real) cobra as he and Ben escape into the jungle. Pushing the limits of plausibility, Ben then finds a plane that has crashed into the jungle years earlier and uses various items on-board to fashion boobytraps and molotov cocktails to kill the throngs of Dona Lucila's men out to kill him and his son. One of the bad guys uses a three barreled machine gun/rocket launcher that must be seen to be believed (and you just know it's going to end up in Ben's possession before the film is done). 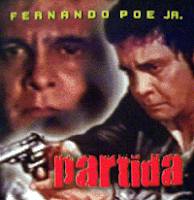 THE LETHAL HUNT (original title: PARTIDA) is the type of low-budget Filipino action film that's low on logic (Ben has only been in prison for two years, but when he gets out, his son looks to be at least four years old!) but more than makes up for with mindless violence and a high bodycount. Also starring Michael St. James, Miguel Rodriguez, Paquito Diaz, Romy Diaz, Shalimar Alcantara, Candy Crisotomo, Eddie Arenas, Bing Davao and King Guitierrez. The print I viewed came from a Greek-subtitled VHS tape. Not Rated.