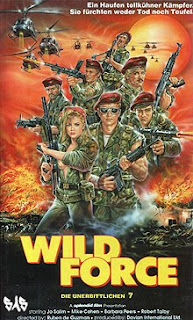 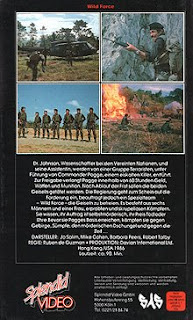 To paraphrase Johnny Carson, there's an exciting 30 minutes of plot spread over an hour and a half. A group of commando's, including one female, are recruited for a mission to rescue Professor (doesn't-have-to-call-him) Johnson and his secretary from rebel dirtbags. Unfortunately, the soldier's monotonous trek across rugged mountain terrain wastes about two-thirds of the running time. Still, there are some nuggets of bad movie gold along the way. Typical of low rent Asian action movies, many of the Filipino soldiers have accents like the Bowery Boys. Moments of inspired stupidity, some Ed Wood Hall of Fame dialogue, and several sequences of bullet ballet virtuosity rescue Wild Force from the fast forward/eject button.

There are some terrifically terrible moments that clumsily cloy at the heartstrings. For example: In a skirmish with rebels, one of the commando's takes a bullet to the kneecap. Rather then bog down the mission, he most graciously agrees to kill himself. While holding the other soldiers at gunpoint, he engages in a hysterical suicidal rant. He can end it all with a short n' sweet bullet to the brain, but why waste ammo? Instead, he makes a decision to go for maximum entertainment value, and tosses himself off a jagged cliff. He bounces his way to an agonizing death, and much to his chagrin, is still breathing at the bottom. A few moments later the tortured soul succumbs. The other soldiers share a few moments of grief and vow to complete the mission in his honor. There's no cracking wise about the dearly departed idiot.

The staging of the final gun battle is commendable. Even minor characters and extras eat lead with a James Cagney bravado. (I really miss the ham handed flourish of old school movies in this regard. Chop-chop editing has largely eliminated the art of playing dead with gusto).
Posted by Unknown at 9:03 PM