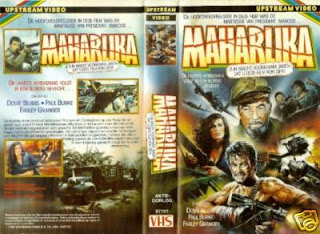 Working title “Ang Mga Maharlika”; re-released to VHS in the 1980s via Nepomuceno Productions as “Guerilla Strike Force” and in as “Viidakkosissit”] 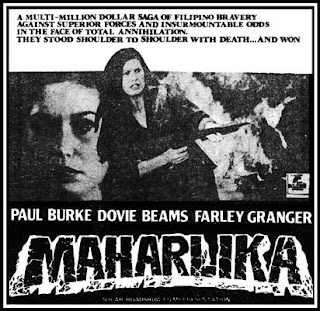 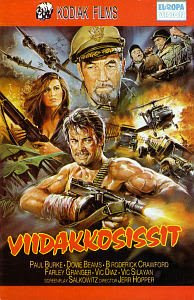 “Imelda called in family assassin to deal with love rival” by Neil Tweedie, The Telegraph 19 Jun 2001

WHEN an American actress threatened to expose her affair with Ferdinand Marcos, his wife Imelda called in the family assassin to change her mind.

The affair of Dovie Beams was one of the more colourful matters occupying the Foreign Office in 1970, and not the only one involving the world's most voracious consumer of footwear.

Miss Beams's unhappy association with the dictator of the and his wife began when she was recruited to play Marcos's lover in a film chronicling his life. Fiction and fact were not long separated, however, and the 38-year-old actress began an affair with the president.

It lasted until January 1970, when Miss Beams decided to return to . Eight months later, she was back in claiming that Marcos owed her $150,000. According to a dispatch from the Governor's office in , Miss Beams was using love letters and tape recordings of the couple in bed as bargaining tools.

Miss Beams called a press conference, during which she disclosed some of the information she held. The government suppressed reports in the local press and Mrs Marcos took a hand in the matter.

The dispatch read: "Marcos himself was keeping in the background, but Mrs Marcos instructed that she [Miss Beams] was to be given no money whatever and thrown out of the country.

"She was seen on to the plane by a staff member of the embassy but, as soon as he left the plane, the seat next to her was taken by Delfin V Cueto, whom she knew to be Marcos's 'No 1 hatchet man'. He made no approach to her during the flight, but she was thoroughly frightened and on arrival in moved hotels frequently to avoid him."

Mrs Marcos provided more headaches in 1970 when she visited . Although the trip was private, Foreign Office officials were driven to distraction by her demands and accused her of virtual blackmail in seeking an audience with the Queen. One said: "The Philippine effrontery is almost breathtaking. There are limits beyond which we cannot and should not go to meet Mrs Marcos's wishes."

In the event, the visit passed off well, although the British ambassador in later reported: "A difficult moment almost arose when Mrs Marcos was informed that she would be expected to curtsey to the Queen. Fortunately, a tactful explanation served to calm the situation." 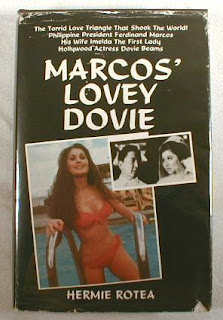 Hard-to-find expose on "The Torrid Love Triangle That Shook the World! Philippine President Ferdinand Marcos, His Wife Imelda the First Lady, Hollywood Actress Dovie Beams". Includes all the dirt, including transcriptions of "X-Rated Sex Tapes". Illustrated in black and white. Brown boards lettered in gilt, 257 pages plus order form for additional copies, printed dustjacket with a photo of bikini-clad Dovie Beams on the front. Some light edgewear to the covers, good hinges, sound text block, very clean pages free from names or other markings. The mylar protected dustjacket has some edge chips and tiny creases/tears but very little paper loss. A clean and sound copy.

The origins of the name "Maharlika" from the CPCA Brisbane website:

Back in the late 1970s and early 1980s, the dictator Ferdinand Marcos attempted to foist upon the Filipino people the name Maharlika. In pre–colonial Philippines, maharlika denoted a warrior–noble who belonged to the lower aristocracy and who rendered military service to his lord.4 But Maharlika also happened to be the nom de guerre that Marcos, vaunted to be the most bemedalled Filipino soldier, used as an anti–Japanese guerrilla soldier in World War II. It was also the name of the guerrilla unit that Marcos claimed to have formed and led in World War II and to have grown into a 9,200–strong force in 1945.5 Marcos’ sycophants tried to appeal to the Filipinos’ sense of nationalism, arguing that merely reflected the victories of the country’s invaders. They cast aspersions on the competence and character of Philip II, pointing out that he reigned badly and precipitated ’s decline as a world power, and that he succumbed to venereal disease, a scourge of royalty and nobility then. To drum up support for Maharlika, the Marcos regime concocted and peddled the “Maharlika culture”, which was purportedly based on pre–colonial native traditions and values. The search for national identity and culture became the search for the “maharlika qualities” of the Filipino.6

Those who took up the cudgels for likewise sought to evoke nationalist sentiments, but did so perhaps more ardently and convincingly. The name Philippines, according to Remigio Agpalo, was enshrined in the country’s poetry, essays, speeches, letters, state documents as well as in patriotic music, and was “a symbol of a saga of nation–building, a struggle for freedom, a history written in the blood and sweat of Rizal, Bonifacio, and many other national heroes and in the sweat and tears of ordinary citizens”. To replace Philippines with Maharlika, argued Agpalo, is “to cut ourselves from the historical, emotional and ideological roots of our national identity, leaving us without vital sources of purpose, meaning, and life” and “to break faith with our fathers and grandfathers who fell in the night”.7 Upholders of Philippines subjected Maharlika to ridicule, claiming, for instance, that the term, which was of Sanskrit origin, actually meant “big phallus”.8

The main reason why Maharlika did not pass, however, was that people saw it as Marcos’ ego trip. Some Filipinos recalled with bemusement how Marcos, in pre–martial law days, had attempted to have a film about his war exploits entitled “Maharlika” produced, with Hollywood starlet Dovie Beams playing the part of Marcos’ “leading lady”. (The film was never finished. A scandal broke out when Marcos’ amorous affair with Ms. Beams was exposed.) It wasn’t funny anymore when Marcos decreed Maharlika for exclusive government use and when he had a highway, a government–owned radio–TV company and even the reception area of the presidential residence, among others, all re–christened Maharlika. Some saw something more ulterior and sinister. Reuben R. Canoy warned: “[S]hould the country and its leader be known by one name and the people conditioned to the idea that the President/Prime Minister not only represents but is the state, there may come a time when to assail Marcos would be construed as an attack against the state itself and, therefore, within the purview of treason or any of the crimes against the public order or the stability and security of the nation.”9 (Underscoring Canoy’s.) Even among Marcos’ own supporters, there were only a few outspoken advocates for Maharlika. By the last few years of Marcos’ rule, Maharlika was a lost cause. To cap it all, in 1985, the Maharlika guerrilla unit as well as Marcos’ much–ballyhooed war exploits were exposed as hoaxes or at best exaggerations.10