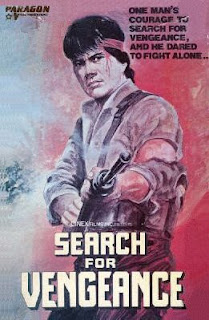 [Philippines release date and original title unknown; also released as “Night Of Fire” and on French VHS as “City Warrior”] 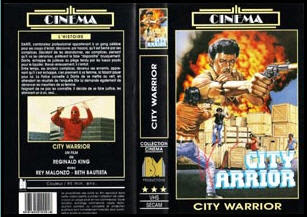 This incoherent Fillipino action film opens with one of the worst hostage dramas to hit the screen. Four thieves are caught by the police robbing a bank so they take a blabbering old woman hostage. The police shoot tear gas into the bank and one thief is shot trying to escape. Two more surrender and the last one is shot in the head by Vito, the head of the cop squad, as the thief tries to get away using the old woman as a shield. Vito and his squad get a lecture from the police chief telling them not to use their guns to kill any more. In what can be best described as the worst case of retaining information, Vito and his squad are next seen gunning down dozens of drug smugglers and then Vito shoots and kills the local mob boss' son in a bar fight. Vito is suspended from the force for not listening to the police chief. The mob boss is not so pleased losing a million dollar shipment of drugs to the police, but he's more mad about losing his son, so he vows to get revenge on Vito. He sends a package bomb to Vito's house, but it only kills Vito's wife. Now Vito vows revenge. The rest of the film is a series of shootouts and fisticuffs as Vito and the boss' gang go after each other. Vito becomes legendary and the populace consider him a modern day Robin Hood! That is, until the mob boss makes Vito look like a ruthless killer which force the people catch him and crucify him on a cross! Only an impassioned plea from Vito's young son saves him and then Vito faces the mob boss one-on-one. The mob boss has a few knives up his sleeve in his climatic battle with Vito in a graveyard.

Put your brain in neutral and be prepared to be sent on a very surreal voyage. The kind of voyage where bars play an instrumental version of Michael Jackson's "Beat It", there's an awkward martial arts fight every 10 minutes and the dialogue has to be heard to be appreciated. Director Raymond "Rey" Malonzo, who also acts in this film as Vito using the name "Reginald King" (and also directed CLASSIFIED OPERATION - 1985 [aka FIRE DRAGON]), also tries to inject sappy sentimentalism into the mix, as the scene where we are introduced to Vito's wife and son. Vito gives his son some money to go out and buy candy so he can do the down 'n dirty with his wife, only to have his son say, "Dad, I don't like candy!" I had fun counting the times the mob boss' cowardly gang would plead, "Please don't kill me!", whenever Vito would beat them in a fight. It's also filled with hilarious dubbing, such as, "Stone that son of a bitch!" and "Take him down from the cross. Relieve him from his suffering." I believe Malonzo was also trying to put some religious subtext into this film, but it gets lost among the gunshots and badly-staged fights. This film has a weird type of energy to it, such as the scene when Vito's son pleads for his father's life only to get shot in the arm by one of the boss' goons for his good deed. That alone is worth at least one viewing.
Posted by Unknown at 9:29 PM