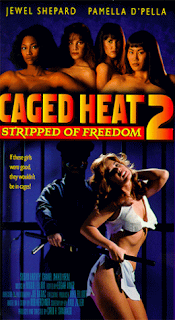 [Article originally appeared on the B Movie Babe website]

So there I was...trapped on "," a maximum women's security prison somewhere in the , twenty thousand miles away from a decent hamburger, four countries away from . Why was I here? Oh, yeah...the mission: save the Princess from certain doom (and I'm not referring to Princess Di).

I guess I didn't read the script very well, or maybe I was concerned more with dialog, I don't know. All those pages of getting thrown in the mud, running in the rain through jungles, whipped by guards, hung by my hair, beaten up by my fellow inmates, slammed into walls and bars...I had the silly idea that they would be done by a stunt double. Then I got to the set the first day and discovered who the stunt double was. It was me.

I was playing the lead – a female "Rambo" type – in an action flick currently entitled "Prisoners" (the title could change next week). My first Roger Corman movie! It was made in association with Premier Films and directed by Cirio Santiago, who is best known for "Firecracker," "Firehawk," "Ebony, Ivory and Jade" and about four hundred other films in which women beat the crap out of men.

My character is a CIA agent posing as the mistress to the King of some unknown country (original so far, huh?). I stage a bogus assassination of the King as part of an attempt to get him out of the country. If everything had worked properly, the whole movie would have been about eight minutes long...so, all of a sudden, some thugs kidnap his daughter, the princess, and throw her behind bars at the prison where women are beaten, mistreated and forced to take showers every few minutes. Like an idiot, I go and promise the king, "I'll save her."

So how does one break into prison? The old fashioned way: Drugs. I get busted with a few pounds of Heroin, thereby landing in the slammer. I fight a few of the inmates, argue with the princess, attempt a rescue, fail, get beaten up by the guards, try another rescue attempt, blow up a few guards, flee through the jungle, etc.. I won't tell you the ending...I think I'll just let you wait until it shows up on cable or in your video stores around the beginning of next year. (Of course, if you happen to be in around the end of this year, you can see it in an actual theatre there...but I wouldn't make the trip just for that.)

Most of the film was shot in the Philippines...which was pretty cool, if you like rush hours that last all day, food that stares back at you and insects the size of a Pontiac.

About the traffic: We had a location that was fifteen blocks from the hotel. It usually took forty-five minutes to get there. So, when people complain about traffic jams in , I just smile and say you could be in the . Which is usually followed by a blank stare and instant change of subject.

When I first arrived in , the first thing I noticed – aside from the odor of leaded fuel and traffic jams – was the transportation the people used: buses to you and I; to them, Jeepneys. These "Jeepneys" are tacky, neon-colored, elongated jeeps with signs that boldly declare the colorful name of each vehicle. I almost got run down by Cancer, Taurus, Christ and Fred. (My favorite was probably the Nowhere. I found it odd that people would pay the one Philippine peso to go for a quarter mile in the Nowhere. I stood there, staring straight at this pink neon bus, wondering if the people really knew they were going Nowhere...or was there some hidden place called "Nowhere," known to everyone but me, the tourist? Obviously, the Jeepney knew where it was going. Now, in hindsight, I think I should have gotten on the Nowhere and gone...nowhere? But I couldn't; I had a princess to save.)

We were in the for three weeks and for me the best thing was the hotel, The Mandarin Oriental. Every morning, I would awaken in my five-star hotel at five A.M. and go to the set to be whipped or beaten. Around ten at night, I would crawl back to the hotel, my hair caked in mud, dark circles under my eyes and blood (real and fake) running down my lips. There were a number of weddings at the hotel and I had a tendency to wander into the wedding parties, dripping mud and blood, my clothes ripped to wish the bride and groom good luck. I don't think I helped get those marriages off to good starts.