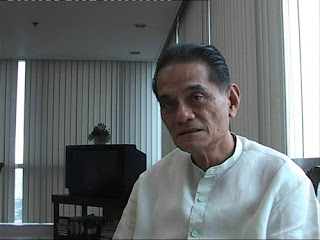 Filmmaker and producer Cirio Santiago, who award-winning director Quentin Tarantino considers a big influence and inspiration, died Friday night of complications from lung cancer. He was 72.

, who was diagnosed early this year, was pronounced dead at 11:50 p.m. at . His doctors declared respiratory failure as the immediate cause, his sister Digna, an official of the Film Development Council of the , told the Inquirer by phone on Saturday.

Like Cirio, Digna is a film producer for the family-owned Premiere Productions.

At the time of his death, Cirio was chair of the Laguna Lake Development Authority.

She said her brother was taken by ambulance to the hospital on Sept. 18 after he complained of difficulty breathing. “His family learned of his condition in March, after his son, Cyril, was buried,” Digna said. “He didn’t even tell us, probably because he didn’t like too much attention.”

He is survived by wife Annabelle; children Christopher, Cathy, Claudine and Cirio Jr.; and siblings Digna and Danilo.

Cirio was cremated on Friday. A Mass will be held tomorrow, 10 a.m., at Santuario de in , .

Cirio, who also used the screen name Leonard Hermes, was chair emeritus of Premiere Productions. In 1995, he was president of the Philippine Film Development Fund.

Among Cirio’s better-known films were T. N. T. JACKSON (1975) and FIREHAWK (1993). In the 1980s, he made low-budget Vietnam war movies, working with American producer Roger Corman and directors Jonathan Demme and Carl Franklin.

Several of these B-movies have become cult favorites, cited by such “renegade” filmmakers as Tarantino. During his first visit to the country last year, Tarantino sought a meeting with his two “idols,” Cirio, and Filipino director, Eddie Romero. Tarantino proudly announced that he had based some of the characters in his iconic film, KILL BILL, on those in Cirio’s earlier movies. 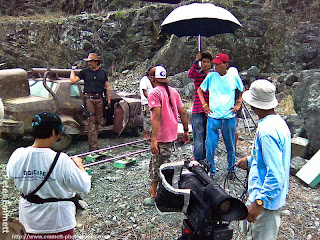 At the time of his death, Cirio was filming ROAD WARRIORS [sic, actually ROAD RAIDERS], produced by US-based 147 Productions, as the sequel to his [1983] sci-fi flick STRYKER. He was to receive a Lifetime Achievement Award from the of the next month. 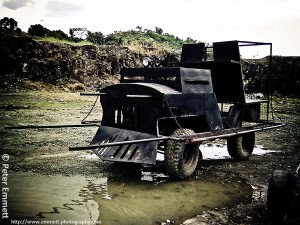 I talked to Jo Mari Avellana the other night to pass on my condolences - Jo Mari is one of Cirio's oldest friends and co-workers - and he's given me permission to reprint his speech from Cirio's Ninth Day Mass:

When Annabelle asked me to say a few words for Cirio tonight, I decided to write down my remembrances because my heart is so full of good memories I am bound to go on all night.

There is no simple way to describe Cirio.

Dan (Cirio's brother) said he was a great mentor and a loving brother – he certainly was. Not only to Dan, but to all whose lives he touched.

Digna (Cirio's Sister) said he made stars out of actors and actors out of stars – yes he did. He also created a few directors, gave several production designers an opportunity to shine, taught his staff and crew the proper way to make movies, and showed the industry that the Filipino had the capacity, the flair and the genius to match talents with the rest of the film world.

Pom (Cirio's brother-in-law) said he was a master at getting people connected – sure enough. No one was beyond Cirio’s reach.

Everyone was his friend. No matter that they may never have been formally introduced.

Kathy (Cirio's daughter) said he was a doting father – without contest. And not only to his own children, but to the many people who had the opportunity to work with him – his staff and his crew.

Cirio loved life. And we all loved him.

He has gone ahead now, but he hasn’t really left us- because we have such lasting memories about that lovely man called Cirio.

(Many heartfelt thanks to Jo Mari for sharing his words, and again our condolences go out to all of Cirio's family, friends and co-workers) 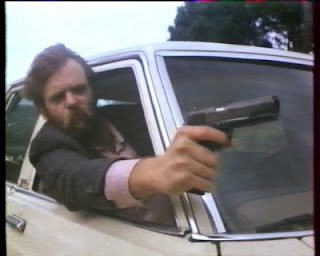 Long-time friend of Cirio and one of his regular "white gorillas" Nick Nicholson (The Destroyers, Dune Warriors, Live By The Fist etc etc...) left a comment on the blog page:

I worked with Cirio for years. When Henry Strzalkowski informed me about Cirio's death I was devastated.

Cirio was a great friend and mentor. He was like a father to us all.

The thing I remember most about Cirio was his sense of humor! He loved practical jokes. When we were filming Silk at Manila Domestic Airport, Bill M and I had our mexican stand off, Cirio told me, "Just lay there babe, we'll move in closer". So I laid thereon the tarmac with my eyes closed as I usually did while waiting for a shot. I noticed that it had become dark and quiet. I opened my eyes, and I was all alone on the tarmac. Cirio and group had moved way over to the other end of the tarmac!

Nobody can fill Cirio's shoes... He is sorely missed.... 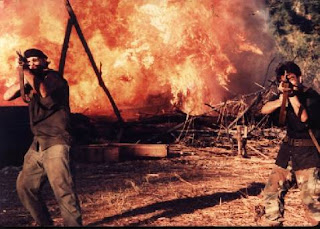 Henry Strzalkowski is another of Cirio's longtime friends, actors and crew members, and emailed me this soon after Cirio's funeral:

I was an extra working on a Cirio Santiago film shooting in the sand dunes of Suba beach in Ilocos Norte, in January of 1983. It was the first set up of the day and they were planting blast pots in the dunes for explosions and they asked if anyone had worked around explosion effects. Since I had just come off working on Boys in Company C and Apocalypse Now, I volunteered. The explosion was on the side of a hill and it was supposed to go off right after I stepped over it. And it did. The force threw me forward and being on a hill that translates to downward. I came down on my rifle and cracked a rib, not badly. When I composed myself, I looked up to see the production vehicles starting up to move to another location. I scrambled to my feet and jumped into the back of a production truck. Sitting there across from me, was the director, Cirio Santiago. I fumbled for some small talk to fill the silence and came up with, "Wow. This place is beautiful. I've never been here before." Cirio winked from behind his sunglasses and said, "Work in the movies, babe. See the world!"

That was when I first met the man. Well, I never got to 'see the world.' But I did get to go to places I'd never dreamed I'd go. That film, Wheels Of Fire was the first film that I was given lines in and I went from an extra to a bit player overnight. I was a theatre arts major in college so I actually did have formal training as an actor. I would go on to become a member of Cirio's crew and a regular among his actors. This was the beginning of ten of the best years of my life.

I would be hard-pressed to choose other anecdotes about Cirio or 'the boss' as I used to call him. I still called him 'boss' on his latest film "Road Raiders," last July. I can only say what I knew about him. I can say there was no film set that was more fun than Cirio's. I can also say there was no film set where we worked harder. I can say that he ruled the set with sheer presence alone. I never saw him lose his temper. I never heard him raise his voice in anger. And he still managed to make us all laugh. You worked your skin off for him because you wanted to please him. Maybe that is why twenty years and thirty films later, I still called him 'boss.'

Now, he is gone. It is the end of an era. Although his films were not that well known among his countrymen, since he distributed abroad, those in the industry who were in the know, were all at his memorial service last Sept.29. It was a sad day for Philippine cinema. We all filled the church in Sanctuario de in and sat misty-eyed as friends and relatives read their eulogies. I am not embarrassed to say I wept like I'd lost a blood relative. He was my mentor. He was my friend. And I will miss him. See you, boss. 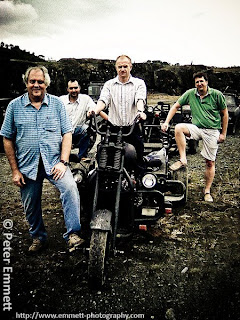 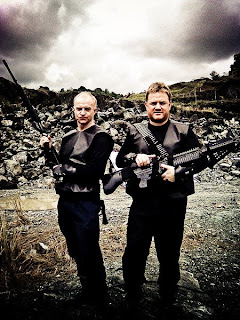