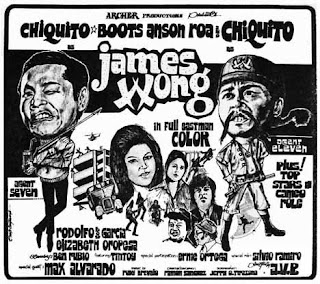 Asiong Aksaya, Mang Kepweng, Kenkoy, Barok – all these comic characters have a common denominator. They are all portrayed on cinema by the king of slapstick humor, Chiquito.

He was the archrival of Dolphy as the top comedian during his prime. However, he distinguished himself as the only actor who championed the Chinese people in his films by celebrating their industry and practical sense through his Mr.Wong character.

Apart from his luminous showbiz career, Chiquito was also an accomplished politician. He was an undefeated councilor of until the time of his death in July 2, 1997. He even served as the city’s Vice Mayor for sometime.

A man of various interests, Chiquito also excelled in sports. The only game that he did not try was bull fighting. He was a good boxer, a motor racer, a professional jai-alai player, a champion bowler and an excellent jockey. In fact, he was also one of Bata Reyes’ mentors, having notched a world championship title in billiard.

On the artistic side, Chiquito did extremely well as a comedian but he also proved his mettle in the fine art of drama, when he won the Famas Best Actor award for "Lovingly Yours, Helen."

He was a director, writer, and producer for Sotang Bastos Productions. He even wrote poems and composed songs for many of his films. Proof of these, was the rap music that he did for the movie, "Pinagbiyak na Bunga" with Andrew E.

Chiquito is also credited to have portrayed the very first male version of Darna in the film "Teribol Dobol." He was also the discoverer of Alma Moreno, who also became her leading lady in the movie "Kambal-Tuko."

Nothing fazed Chiquito. Even the snooty found its match in his Gorio character in "Arizona Kid" (Fratelli Di Arizona), an Italian, Filipino co-production in 1968. The now campy classic is being marketed world-wide in an Italian website. It was directed by Luciano B. Carlos and penned by Lino Brocka. In this film, the dimunitive comic wonder starred with then ’s hottest sexpot, Mamie Van Doren.

It also featured Bernard Bonnin, who cheerfully recalled that in one crucial scene, Chiquito had to ride a galloping horse despite a painful boil in his arm. Not the type who would halt a shoot for his convenience, Chiquito did the scene with gusto, resulting to the boil’s eruption while he mightily rode his horse. The shoot did go even if he was in terrible pain. 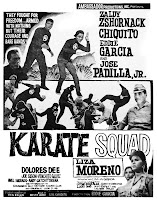 Eliza, one of Chiquito’s five daughters, recalled the many accidents in his dad’s life. "He figured in a motor mishap that almost crushed his face. Nariyan yung natapakan ng kabayo ang ulo, natapyas ang tenga, tumalsik, pinulot n’ya saka ikinabit. Hinanap pa namin." She also remembered how the late Rodolfo Garcia almost whacked his dad’s skull by a samurai in one fight scene. But that didn’t stop the shooting. "He was thinking of the small workers who would be affected once he stopped the shoot. So, kahit tumutulo ang dugo, pinunasan na lang, tapos tuloy ang shooting."

Among his many films, he loved those which he wrote and directed, like "Pete Matipid," and "Six Million Centavo "

Chiquito had his first acting role in 1947’s "Sanggano" by Palaris Pictures. It was Larry Santiago however, who gave him the break in the film industry. He used to be a leading lady to Pacita Aranas. He was even a part of the original "Low Waist Gang" that catapulted Fernando Poe Jr, Zaldy Zhornack and Jess Lapid Sr. to showbiz fame.

Chiquito started his showbiz career when he was seven years old. His first foray into the field of entertainment was at Clover Theater during the early 40s. He was joining the impersonation contest of Tugo when Lou Salvador Sr. spotted him, and gave him the break as a performer during theater intermissions. 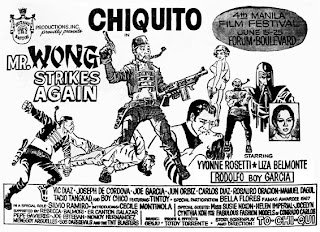 "The audience responded well each time he came out with a powdered face," said Eliza. It was the origin of Chiquito’s long love affair with Mr. Wong character. "Sabi n’ya, lagi-lagi ang mga Chinese daw noon were portrayed as tindero ng taho. He made something out of that, but instead of mocking the Chinese, he uplifted them and celebrated their virtues when he was already doing films. Kaya, gusto sya ng mga Chinese noon."

In real life, he was Augusto Valdez Pangan, born in 1928 to a wealthy family from San Miguel, Bulacan. His ancestor was Epifanio delos of, oh well, the famous EDSA.

He was only 19 when he married 16-year-old Vilma, Ramon Zamora’s dancing tandem in the Jumping Jack act at Dalisay Theater."He was the best," said Vilma to her children, but recalled that during their courtship, she never liked Chiquito, "Kasi pangit." Of course, now, she was saying it, in fond jest.

Even if his parents were rich, Chiquito raised his family on his own. "I will build my own castle," he promised his father.

The new couple, Augusto and Vilma struggled to make both ends meet. He was then a professional jockey. They lived in a room with a monthly rental of twenty-five pesos. "The monthly rent for a horse stable was a measly thirty–five pesos. So, you could imagine their hardship. Talagang sinolo niya. Hindi siya humingi", said Eliza.

To his showbiz friends and fans, Chiquito was Papang, but to his children --Medy, Eliza, Gus, Buma, Princess, Tiny and Archie, he’s always their beloved Papa. When asked about his father, Eliza replied, "Lahat kaming magkakapatid, everytime we talk about Papa, nalulungkot kami. He was the best father. We grew up hearing his wise counsel but he spared us the rod. If we committed mistakes, he never got angry and instead talked to us like a friend. He would remind us the Dos and Don’ts and the possible consequences of our actions, but he never imposed rules. Instead, he guided us to make better judgements. Kahit kami magkamali, alam naming, nandyan siya to pick us up. When I was young, I used to hear him say, ‘Pag nagmahal kayo, masasaktan kayo. How I wish, mabibili ko ang pagmamahal para hindi kayo masaktan, kaso di naman pwede yon".

"He’s funnier in real life," revealed Eliza, who still lives in their ancestral home in New Manila. "Our father built this house for us, so that we’d always be together".

Chiquito’s house at still maintains the original architecture, including his bedroom with an adjacent chapel and his billard room. His photos adorned the sala, and one can still see his personal mementoes, like the collection of old coins, and his old BMW. "Papa had given us so much, and we don’t want to forget him", explained Eliza.

She considers their fine education as one of the greatest gifts of their dad. "He died a wealthy man, and he made sure that all of us, including his great grandchildren would never go hungry. But he also taught us how to be good fishermen by providing us the best education." All the girls studied at the in , while the two boys graduated from Ateneo de Manila.

Chiquito was also fond of inventing new devices out of scraps."He’s not a carpenter but he would try to repair furnitures. Hindi naman tubero, pero pipilitin niyang ayusin ang tubo," said Eliza. " He invented a water heater out of an empty albatross container. He also made an electric tester using an empty ballpen and a cap of Vicks Vaporub." All these are being kept by his family like a true treasure.

Chiquito wanted to become a doctor or lawyer but mustered only a high school education from Mapua because of his great demand in showbiz.

Before he died, Chiquito summoned all his children to go home on the premise that they would have a grand vacation in Boracay. "One came from , the other was from , and another was in . Without second thoughts, all of us left our jobs and went home," said Eliza.

"He had no regrets. He got everything he wanted in life. ‘Ngayon naman, I will face my Creator’ sabi nya. Baka daw nalulungkot ang kanyang Creator and He needs somebody na magpapatawa sa Kanya. Naiiyak ako no’n, pero sabi n’ya, "Wag kang umiyak, hindi ka maganda".

In his last days, the family gathered daily at the hospital. Eliza said, "We had dinner together, we played tong-its and other family games. There was a mass everyday. We kept everything in private because he wished to spend his last days, only with his family. Sometimes I would look at him, when we were having a fine time, and I would see tears of joy on his face."

Chiquito died of cancer of the liver. He was 65. At present, his wife Vilma lives at their house in with son, Gus. Chiquito have six grandchildren. All of the first-born males bear their granddad’s name, Augusto-----Marco Augusto, Ethan August, and Augusto Nicko.