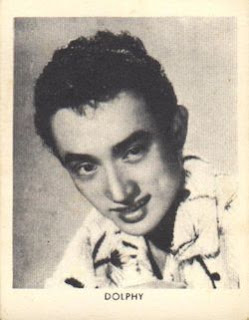 Dolphy interview from People In Progress:

If he had not been an entertainer, he would have been a sailor. Mang Dolphy shares this surprising revelation wistfully, recalling his boyhood in Tondo from where he and his friends would walk to and watch American battleships moored there. “I have always felt an impulse to sail away on those ships,” he says softly.

Luckily for us, he stayed land-bound and gave us instead classics like Buhay Marino, where he and Panchito, both ordered to give a ship a coat of paint, cover it instead in multi-colored polka dots. Several generations of Pinoys have since been charmed by the luckless, guileless, wisecracking underdog that Mang Dolphy portrays to perfection.

Seventy-five years into the life of this legendary comedian, it would be an exercise in triteness to add to the platitudes heaped upon the more popular aspects of his life and career.

To be sure, he deserves every praise for the breadth and variety of his cinematic experience and his enduring appeal to mass audiences. He is the first comedian to win an acting award for Ang Tatay Kong Nanay (with Niño Muhlach), the first to put up his own production company (RVQ) and produce his own films, the first to play an openly gay character (Jack, in Jack and Jill with Lolita Rodriguez). The last role catapulted him to fame 50 years ago, and he has managed to stay on the crest of stardom ever since.

Perhaps it is Mang Dolphy’s awesome stature or his formal demeanor that has kept others from prying into the lesser known aspects of his career and his life. Where many have extolled his comedic genius, for example, few have bothered to ask him about his own understanding of it, and his own accounting of how it evolved.

On this rarest of opportunities, I resolve to do so, and his answers astound me with their clarity and intelligence. By his own account, Mang Dolphy was not in any way remarkable for his hilarity while growing up during the 1930s. He was solitary by nature, tormented by his asthma and a growing inferiority complex. But the boy loved to dance—he had to dance. And so he did, first on the sidewalks with fellow amateurs and enthusiasts, and later on the stage at the age of 15. The asthma left him eventually. 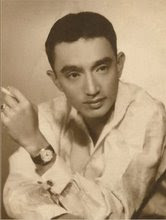 Post-vaudeville, the stage show was the crucible for aspiring performers. It usually consisted of song-and-dance numbers, skits and gags, all played out before live audiences. Mang Dolphy paid his dues and developed his idea of funny via the stage show, playing to tense, expectant audiences in venues like Avenue and Clover theaters in wartime . From dancing during intermissions (while the stage sets were being re-arranged for the next skit), he worked his way to bit parts. He played the resident Chinese storekeeper in stage show sketches. The role was a hit, and he quickly became a mainstay.

Along with vaudeville veterans Pugo, Pugak, Patsy and Bayani Casimiro, he learned to develop comic timing, throw punch lines, improvise, follow up on jokes that fell flat. As if that weren’t stressful enough for a beginner, his performances would be interrupted now and then by air raid sirens, whereupon entertainers and audiences alike dove into the orchestra pit or under their seats as bombs fell on the city.

Mang Dolphy learned that at the height of suffering and misery, people still wanted to laugh, and in fact needed to laugh. He recalls a particular instance when the bombs hit just as a fellow performer was singing “I Want to Live.” They emerged laughing from their dugouts later, relieved, of course, that they were still alive. Laughter, he learned, could sometimes be a matter of life and death. 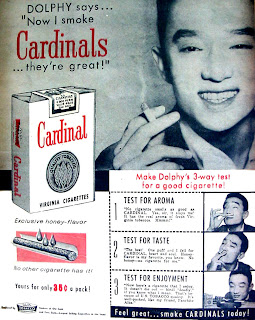 I asked Mang Dolphy about his own film icons, and he immediately cites Charlie Chaplin, king of silent films in Depression America. “He did not have to say anything to make you laugh,” Mang Dolphy says admiringly. Remembering old re-runs of his Sampaguita movies, I see the distinct influence: the facial expressions, the physicality of his comedy.

Thoroughly familiar with Chaplin’s films and life, Mang Dolphy expresses awe for Chaplin’s keen political sense. He cites the Chaplin feature The Great Dictator, a parody of Hitler’s quest for world domination. He notes the prescience (the film was made before World War II) and the talent with which Chaplin mocked a dangerous and controversial political figure.

I ask Mang Dolphy, then, why he does not seem to favor political jokes in his own routine. After all, he is famous for his quip about not wanting to run for office because of the possibility that he might win—a remark that is loaded with more political insight than the loftiest campaign promises of your average Pinoy politician. “Philippine politics is very different—it’s very personal,” he remarks, and adds that he can only crack jokes about politicians who are friends of his, such as Erap (former President Joseph Estrada). “The others might not find me so funny if I make fun of them,” he says with a laugh.

And so he has established other personal bottom lines for his comedy: no jokes about religion, and no jokes about other people’s physical defects. “I avoid jokes that might be hurtful to people,” he declares. “At ayoko ng bastos (I don’t like raunchy jokes),” he states categorically.

From these we get a glimpse of Mang Dolphy’s acute understanding of the Pinoy psyche and his recognition of often unarticulated cultural boundaries. He says that what is funny to the Pinoy—the masang Pinoy towards whom his comedy is directed—is self-ridicule, panunuya sa sarili. “That we can be eating tuyo (dried fish) and still find to something to laugh about.” Thus he has used humor to shed a more benign light on the often harsh circumstances that confront Pinoys. 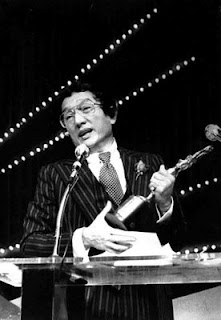 Dolphy receiving his Best Actor award at the 1978 FAMAS Awards

As John Puruntong of the phenomenal ‘70s comedy series John en Marsha (with the late Nida Blanca), he was the Pinoy Everyman—poor, hardworking, loved by his family, respected by his neighbors but despised by his rich mother-in-law. He is the “Puruntong” in “puruntong shorts,” those loud, baggy cut-offs made of cheap fabric that are the favourite home-wear of Pinoy men. It is an indication of how indelible his imprint is on Pinoy pop culture that a piece of the standard Pinoy wardrobe has been named after a character that he brought to life.

In the top-rating sitcom Home Along the Riles, he is Mang Kevin, the philosopher by the railroad tracks.

“Television is for the masa,” he explains. “You can make them laugh by locating your comedy within their daily lives.”

Mang Dolphy has done everything, and I mean everything. His filmography is probably the most diverse among Filipino actors, spanning drama, action and even musicals.

He has done the stage, movies, television and radio. Before he turned comic superstar, he even joined zarzuelas in some far-flung provinces. He also did shows in .

Still he works, busy at 75 in an industry where youth and momentary fame are the standards. And in a business run by stellar egos, he is the rare democrat, collaborating on Home Along with staff and crew. “Everyone is free to contribute an idea. Any idea might enhance the show,” he says simply. Still betraying his rigorous stage-show training, he improvises and adlibs when he spots the chance. “You have to recognize that moment when you can improve on the humor provided by the script,” he shares. 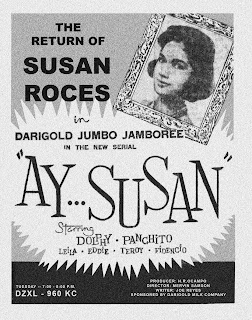 He unwinds by staying at home with his children, reading, watching TV and an occasional film. He particularly enjoys the Discovery Channel and sports programs.

A new source of amusement for him these days is text jokes. “Some are so corny, they make me laugh,” he chuckles. Imagine Mang Dolphy snickering at text jokes. That’s a rich moment there: the King of Philippine Comedy tickled by bits of digital humor.

The image I came away with from this encounter, however, is an image from an alternative reality where Mang Dolphy is a sailor, standing on the deck of some ship, staring at the sea that he has always loved. How different would our laughing habits have been in his absence?

When people warned me that Mang Dolphy was quite reserved and saw for myself that he was so, it didn’t really surprise me. We must understand humor as something that wells up from a tranquil place where one observes the world with much accuracy. It is from that space within him that he figures out ways to keep us laughing at ourselves. 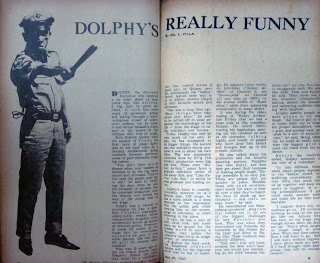 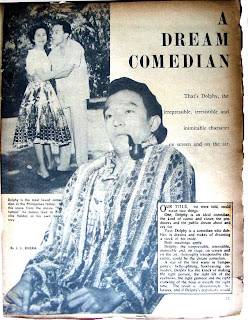 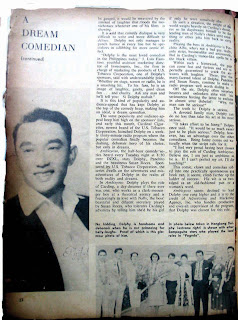 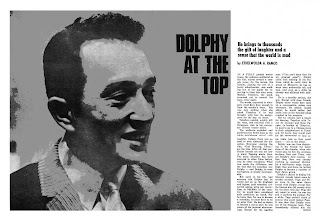 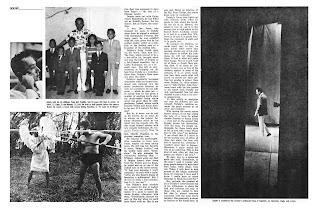 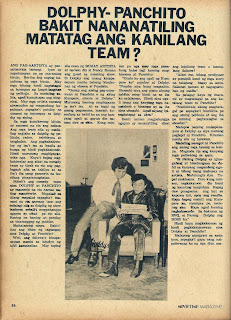 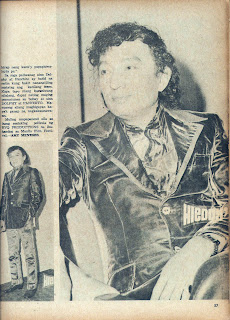