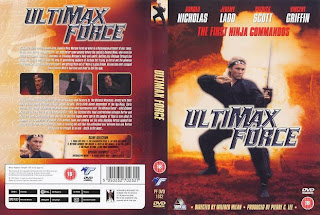 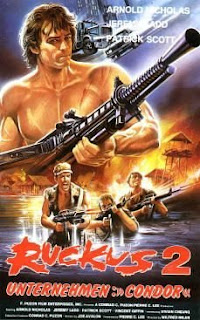 Tagline (taken from the UK DVD): Missing in action and presumed dead, Captain Dave Morgan turns up alive in a Vietnamese prisoner of war camp. He has been able to send word out – but help better came quickly before the sadistic Colonel Minh, who runs the hellish internment stockade, succeeds in breaking Morgan’s body and spirit. Getting into Vietnam through the backdoor is easy enough, with the help of gunrunning soldiers of fortune but trying to ferret out the phantom POW camps, rescuing half dead prisoners and getting them out of ‘Nam is a pipe dream. No one has ever escaped from Colonel Minh’s hell hole and lived to tell the tale. That’s the kind of challenge Chris Burton and his boys look forward to. The Ultimate Maximum. Armed with their Ninja skills, forged on them by their Sensei Hiroshi; thirty-sixth direct descendant of the Iga-Ninja, Chris Burton, Dick Foster, Bill Norton and Mike Dobson form what mercenaries dub ‘The Ultimax Force” – what Colonel Minh will call the ‘Curse Of The Foreign Devils’. Fate has destined this final confrontation between Burton and Minh and there is no stopping now, the one-on-one that began years ago in the jungles of ‘Nam is now about to resume. Try as he might to prevent it by moving camp and sending out his elite blocking forces against the rescue party, Minh realises that his time is running out and that the unfinished duel between him and Burton will have to be brought to an end – death to the loser…

Aaaahhh… the 1980s! The sheer unbelievable Ninja craze! More cheap but cheerful Namsploitation flicks you can shake a severed foot at! Insane post-nuke mayhem! Yeah, those were the days… Enter Wilfred (aka Willie) . In 1986 the auteur behind such cinematic Filipino gems (well, not really) as MAD WARRIOR (1985) and W IS WAR (either 1983 or 1986 – depending on which source you believe) – two lesser known entries into the crazy post-nuke cycle initiated by George Miller’s MAD MAX 2 – THE ROAD WARRIOR (1981) – tried his hands on a movie that mixes two of those very promising subgenres in order to make some quick cash. It’s Ninjas in this time, and although this sounds too good to be true, ULTIMAX FORCE falls a bit short of my expectations. Perhaps you remember Cirio H. Santiago’s hugely entertaining action nonsense NAM ANGELS (aka HELL’S ANGELS IN VIETNAM, 1989), that has got quite a similar concept, but is ultimately more satisfying. In Santiago’s case a few ultra-tough members of the rocker gang Hell’s Angels go to Vietnam to rescue a bunch of prisoners, and this film works so well because no one (neither the makers nor the cast members) takes this ludicrous concept too seriously. By way of contrast ULTIMAX FORCE seems to be deadly serious in all respects. It tells the story of four Ninjas who search for one of their friends who is held prisoner in by a sadistic camp commander. Will our tough-as-nails heroes manage to free their friend before he rots in one of those dirty hell-holes? Much to my surprise they fail, thanks to the evil Colonel Minh who prefers shooting his prisoners before the rescue team arrives, but that’s about the only original point in this cliché-ridden, lowbrow action flick. The characters are so extremely one-dimensional (particularly Arnold Nicholas as stone-faced leader Chris Burton and Rey Vhen as mean, arrogant Colonel Minh) that they make John Rambo look like the most complex character on earth.

Produced by Pierre C. Lee and written by Joe Avalon, ULTIMAX FORCE is at least good if dumb fun, provided that you lower your expectations immensely. PLATOON (1986) it ain’t – it has much more in common with the MISSING IN ACTION trilogy (1984 - 1988), only cheaper, sillier, and less spectacular. So our Ninjas (who have really cool names like Chris Burton, Dick Foster, Bill Norton and Mike Dobson) stroll through the jungles, talk stupid things and bump off Vietcongs by the dozens. Not in that order, necessarily. Mostly they rely on their machine guns to wipe out their enemies, but sometimes they also use grenades, chains and – of course – their swords. There are a few shootouts (often spiced up with the sight of unfortunate men being riddled with bullets), punch-ups, fights and explosions, but it’s neither spectacular nor the least bit memorable. Sure, it’s entertaining, in a naïve, trashy way, but it’s far from being great. At least ULTIMAX FORCE is a real Ninja movie, in contrast to all those chaotic Joseph Lai/Godfrey Ho/Tomas Tang patchwork flicks. The British DVD has got a very poor picture quality, and – to add insult to injury – it is supposed to be cut too! ULTIMAX FORCE was also released on tape in on the Mike Hunter label under the title RUCKUS 2 – UNTERNEHMEN: “CONDOR”. For whatever reason they wanted to make us believe that it is a sequel to the action flick RUCKUS (1981) that stars Exorcist-babe Linda Blair. ULTIMAX FORCE is good, undemanding fun, shot on a low budget, with no redeeming values whatsoever. In other words: eighty minutes of stupid entertainment, no more, no less. 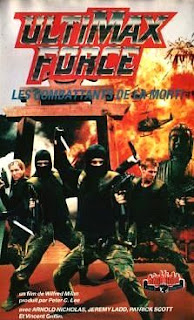 The scrolling text at the start of the movie gives a background story very much like Cobra Mission. POWs are still being held in and being killed & tortured all the time. So a crack team of ninja commandos (sic) are sent off to bring one of their friends back who's still being held captive. After gathering the information and equipment they need they are flown out and set on their quest to free the captives.

The film starts up with some very cheap titles and music with is kind of cool really(in my opinion) quite like Bad Taste's score. Then we get treated to a quite well choreographed ninja fight sequence with kitanas. Although not making to much sense it does serve as a nice intro to the film. Then we have the rest of the film of them going through jungle shooting up the enemy jumpin about and throwing grenades. There's action, treachery, more action, more treachery which all leads up to a literally explosive conclusion.

This is a quite fun film, although not brilliantly done it manages to fill itself out with plenty of varied action and you don't get bored watching it. Plus unlike quite a few films the ending is not a total let down but actually is very cool.

I've never seen this available on video anywhere except for the one copy I have so I'm guessing that it's quite obscure, one to add to my list of totally obscure (English language) films. See this if you can and if you don't expect to much from it, you'll have a good time. 8/10