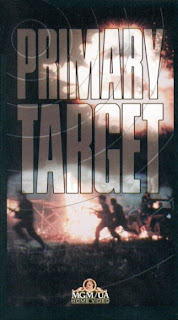 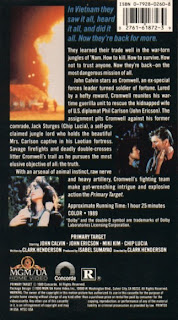 March 1977, Chiang Mei, Thailand: When the wife of rich industrialist Phil Karlson (John Ericson; FINAL MISSION - 1984) is kidnapped by rival Jack Sturges (Chip Lucia; SYNGENOR - 1990), he hires three ex-CIA operatives, Cromwell (John Calvin; TV's TALES OF THE GOLD MONKEY - 1982), Frank Rosi (Joey Aresco; CIRCLE OF FEAR - 1989) and Joe Lewis (Henry Strzalkowski; EQUALIZER 2000 - 1986) to save his wife and bring Sturges down. With a promise of $250,000 each, the trio (who are old friends and served in the same Army unit together) readily agree to take the job, especially when they find out Sturges is involved. Sturges also was a member of their old Army unit until he went bad and now smuggles heroin out of . Knowing full well that Phil Karlson is a bagman for the CIA and that their mission smells a little fishy (Sturges may be a drug smuggler, but kidnapping a woman is out of character), the trio, along with a female guide named Pao (Miki Kim), begins their trek down river into Laos to free Mrs. Karlson (Colleen Casey). Along the way, Pao picks up an infant and everyone encounters enemy soldiers. They stop at a village, only to find that nearly all the villagers, including women and children, were viciously gunned-down in the center of town. Pao gives the baby to a young mother who just witnessed her baby being killed by heartless drug smugglers (It's a reasonable solution to a sticky situation). Frank is captured by the drug smugglers, tied to a cross and is tortured by being submerged in a lake while hanging upside down. Cromwell, Joe and Pao rush in and save Frank's ass, killing all the drug smugglers in a hail of automatic gunfire. They make it to Sturges' jungle compound, but it looks as if Pao (after just making love to Cromwell) has turned traitor and joined Sturges' side. To make matters worse, Sturges and Mrs. Karlson are actually lovers (the kidnapping was all a set-up to extort money from her husband), but our trio do manage to snatch her back and intend to complete their mission. Joe is seriously wounded during the "rescue" and dies, leaving Cromwell, Frank and Mrs. Karlson to hoof it by foot to their pick-up point. The finale finds Cromwell and Frank taking the side of Sturges and Mrs. Karlson when it is revealed that Phil Karlson is actually the drug smuggler and Sturges is only trying to help the locals, with the help of his lover, Mrs. Karlson. It's a crazy world we live in, isn't it?

This minor actioner, directed and written by Clark Henderson (WARLORDS FROM HELL - 1985; SAIGON COMMANDOS - 1987), tries too hard to be socially relevant (The plight of the poor locals, who have to deal with the drug smugglers, who use them as slave labor, as well as the brutal government who couldn't give a rat's ass about their well-being. Boo-frickin'-hoo!), but the film comes across rather flat and pedantic. Though some of the action scenes are very bloody (people are shot in the head; women and children are killed on-camera), this Philippines-lensed film seems overly familiar and stale. Even the twist ending is telegraphed early on and the death scenes have an over-reliance on using slow-motion ( is no Peckinpah, that's for sure!). The only plus here is the easy chemistry between John Calvin (who would appear in the far-superior SIEGE OF FIREBASE GLORIA the next year), Joey Aresco and Henry Strzalkowski (a regular in the films of director Cirio H. Santiago). They seem quite comfortable in each other's company and their dialogue seems natural and unforced. That's little compensation for what amounts to be a miniscule footnote in Filipino action film history, though. A small ripple in an ocean of killer waves. Also starring Leo Martinez, Frederick Bailey, Annabelle Roa and Joonee Gamboa. Originally released on VHS by MGM/UA Home Video and not yet available on DVD.