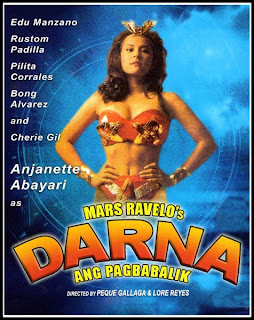 Gallaga’s Darna: Ang Pagbabalik (1994) was technically polished and Anjanette Abayari looked sensational in the revealing Darna costume; yet as a Darna movie (and a Gallaga film), it wasn’t memorable.

Fearless Anjanette essayed the role of Darna almost perfectly, without using a stunt double. For the fourth time aging reptilian, Valentina returns with Valentine and Magnum, her kids. Their mission is to get Narda's magical stone so Valentina can have her youth back. Her son made Narda fall in love with him so they can easily get what they want.

A volcanic eruption in the country side forces a number of families to abandon their homes in Talisay and seek refuge in . Young country girl Narda leads a secret double life as the crime figthing Darna and can trasforms back and forth between this two personas by yelling out either "Narda" or "Darna". While trying to find her grandmother and little brother Ding, Narda is viciously struck upside the head and her magical stone that furnishes her power is stolen. The culprit is Valentine Adan, a tele evangelist who claims that only she can protect the city from an advancing lahar ( volcanic mud flow) and will save those who have pledge their undying devotion to her. Valentine’s dark intentions become more and more aparent and Narda discovers that the woman is actually the daughter of Valentina, Darna's arch enemy. Ding is able to recover the magical stone allowing his sister to transform back into Darna and in the ensuing chaos the aged Valentina is injured and reveals her true form. Like her mother Valentine is actually a gorgon concealing the snakes on her head beneath a bathing cap like hat (turban) before the inevitable face off with Valentine, Darna gains a new ally when she helps police lieutenant Max Ablan ( Edu Manzano) foil a bank robber and later, a kidnapping perpetrated mob boss Magnum (Bong Alvarez). The crime lord manages to escape in both instances, and is actually playing a key role in Valentines plans. She also has another clandestine operative, who is charged with making sure that Darna is helpless to protect from the rapidly approaching lahar.

The movie showed some improvements in special effects. I am trying to be fair about giving my comments but, Peque Gallaga and his co-director used numerous slow motions that I thought is not relevant in some scenes. The flying scenes are accomplished with atrocious blue screen rear projection and cel animation, while the bladder and morphing FX utilized for the monsters are equally quaint. Althought it occationally delivers the serial-style thrills one expects from this genre, the screenplay is episodic and the proceeding are too slacky paced. They should also have revised the storyline like how Narda lost her memory and acted silly in almost half of the movie. It was a waste of time and negatives. I almost fell asleep waiting for Darna to show up again.

Cherrie Gil was great as Valentine. The only problem is her snake wig looks so fake they were not moving at all. And what's up with Valentine's allies? Why do they keep leaving their necklaces at the scene of the crime? It was not explained in the movie. If Valentine only wants Narda's magical stone she could had easily killed her when she had the chance. In the early part of the movie one of Valentine's followers hit Narda on the head that caused her memory loss and stole the magical stone. And when Valentine's car accidentally hit Narda and they came face to face, why didn't she recognize her? These are just some of the loop holes of the movie that I thought would have been easily spotted. I know that our local film makers can make such a great version of the next Darna, they just have to review the script carefully and give her more fight scenes and powerful enemies. And stop making Darna deflecting bullets because she is not vulnurable to any man made weapons. There also was a scene where Valentine hit Darna with a TV antenna and actually made her bleed. It does not make sense at all. Darna The Return, showed potential on making decent special effects. And one more thing - STOP changing Darna's costume we almost didn't recognized her. 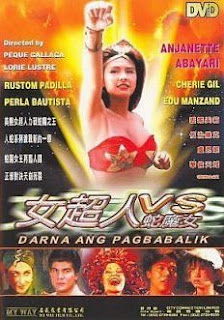 DARNA ANG PAGBABALIK aka DARNA THE RETURN is a wacky Filipino superhero film from the early 1990s. It's filled with cheap special effects, poorly choreographed fights, decent enough looking latex creatures, blunt hack-job editing and only serviceable cinematography and acting. It's also completely fascinating and totally entertaining. Darna is kind of a Filipino Wonder Woman rip with a dash of Captain Marvel (you know: "Shazam!") and this is the second and final(?) film in the series. I haven't seen the first, but here's what I can make out about the series from this film.

Darna is Narda, a young, pretty and rather *ahem* busty young girl who when she swallows a magic pearl (I'm not making that up I swear!) and yells "Darna!" becomes, well yes, Darna, a flying , eye-laser-beam shooting, bikini-wearing superheroine out to defend poor Filipinos from bizarre supernatural villains, corrupt industrialists and rampant natural disasters. It's the rampant natural disasters that are featured prominently in this feature. Narda/ Darna's village is destroyed by a flood which displaces her family to the slums of . Even worse, during the disaster Darna loses her Magic Pearl! It's been stolen by Valentina (or something), Darna's medusa-headed archfoe who needs the pearl to keep her medusa-headed mother alive (or something). She also happens to be attempting to take over the Philipines by sending out subliminal messages through the television, which is slowly winning the populace over to her weird, new age-y cult thing. Narda's mother falls for it.

Eventually Narda gets her pearl back, falls in love with two men, one a cop with a secret and the other her cousin (!?!) and it all ends with some wonderfully inexpensive special effects, silly fights (the ultimate showdown reminded me of a BUFFY THE VAMPIRE SLAYER episode at about 1/3 the production cost)and some sentimental exposition. It's all pretty weird and well, y'know, foreign. But it keeps up a terrific pace, with a constant barrage of cheesy fantasy and fighting. The inept film-making, acting and (on the DVD I viewed anyway) really horrible subtitling only enhances the bizarre spectacle of the whole thing. Go forth and find it, now! 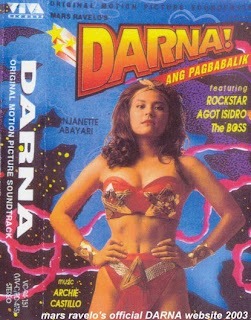 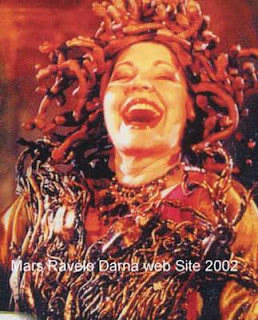 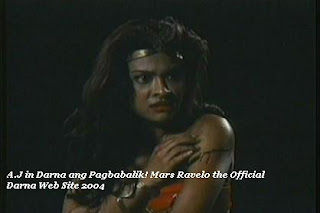 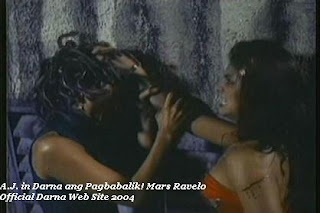 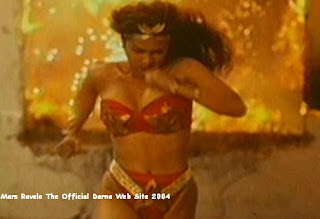 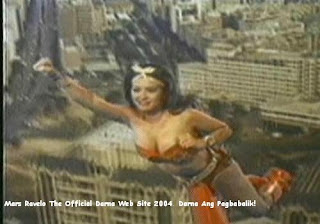 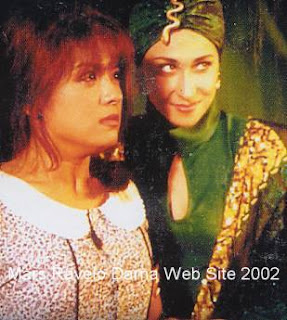 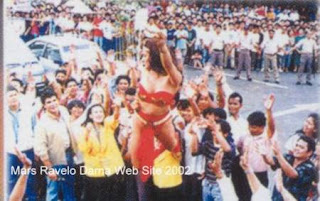 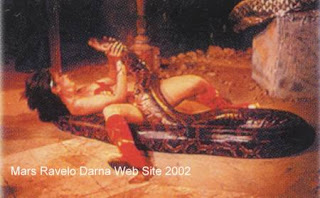 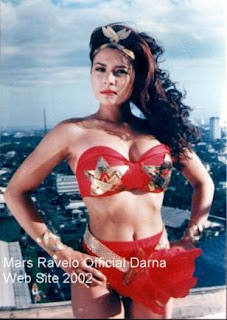 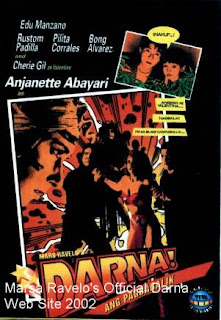