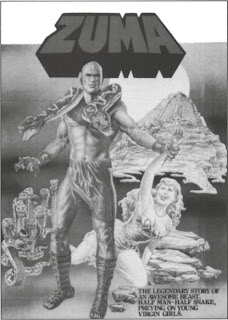 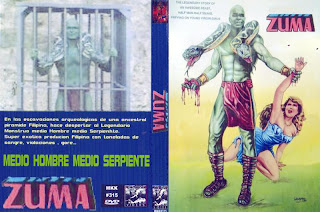 Jun Raquiza's Zuma (Cine Suerte, Inc., 1985) is a filmic take on the macabre set against the spectra of myth. Raquiza presumably resorts to hybridization to underscore the fact that no one paradigm governs how subjectification come to tentative resolutions. The screenplay places Zuma (Max Laurel) in the center of a murderous rampage after being unearthed by an archeological expedition led by Phillip (Mark Gil) and Isabel (Dang Cecilio). Zuma takes a bride, Galela (Racquel Monteza), a madwoman who bore him Galema (Snooky Serna). Her valiant search for Zuma decisively compels her to appropriate strategies, which, while these may excise the demonic curse, place her on new grounds of containment. It is interesting to note how Galema shifts her practice from the clandestine acts of killing, which substantially threaten the conventions of social cohesion, to the assumption of the public role of woman. Such a shift informs much of the ambivalence sustaining the destiny of a social subject who must straddle multiple positions in private and public spheres, as monster, woman, heroine, villainess. The possibilities of creation within the constraints of gender and class relations nourish the terrain in which Zuma takes root, foregrounding the capacities of horror in discussing the ambivalent discourses involved in the construction of modern women and their specific situations. 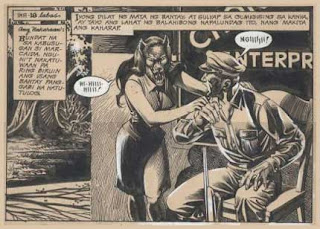 Zuma attains a degree of difficulty and therefore solicits significant artistic interest. It is interesting because it is sensitive to dimensions. A story of a demigod entombed in an aztec pyramid that shocks a couple of archaeologists out of their wits is only one dimension. For around this plot is the real history that is repressed by a seemingly comfortable order. It is the tale of the son of an Aztec serpent God who rips out and eats the hearts of young women. It is this sediment of life that is embodied in this ancient architecture, which is represented not in realistic terms but but in terms that prompt the moviegoer to construe it as a nightmare, a hell into which the innocent is lured, an irrational and impossible place which could only be made contingent on fiction to render it necessarily real. It is this real that differs from the lives of Phillip and Isabel represented luminously by the poreless and seemingly vacant face of Mark Gil and the cluelessness of Dang Cecilio. This sort of reality is vexed until the protagonist is faced with the horror of making a decision to face the creature. That the daughter, the specter of history persist to haunt the apopleptic couple deepens Zuma's dimension. The film is able to maximize the creative powers of Philippine cinema and culture by infusing powerful metaphors and allegories into the concept of blood ties as site of struggle. Zuma vividly translates into film medium, these distillations, produce a mise-en-scene and a rhythm momentum that hack the imperatives of social contestations which, because intelligently horrific, is very cinematic. 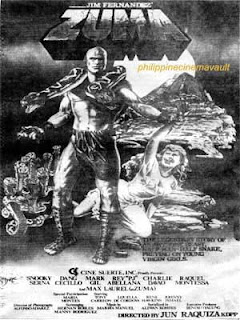 I was drawn in by the sight of the title character in pictures. He's a tall bald guy with a snake on either shoulder (or is it a two headed snake wrapped around his shoulders?) Sometimes I should just not be so curious.

The plot has some people discovering a buried pyramid. A group of them go into explore. A woman in the group, off on her own sees something get out of a crypt and leave the pyramid. When the group investigates they find nothing, only bodies outside. Soon after this Zuma, the guy from the crypt and who is a tall bald green guy with really big snakes on his shoulders, comes across a camping couple. He sets poisonous snakes on the man and then rapes and makes a slave of the woman. Bodies begin to pile up as the woman and Zuma, sporting a trench coat and a very large straw hat begin to eat their way across the country side. Zuma is captured and the woman is thrown in to prison. The military not standing on ceremony locks the green man in a cage and then fires several hundred rounds from a machine gun at him. When that doesn't work, they blast him with cannon fire and end up burying him in an avalanche. Where most movies would fade out at that point Zuma is only getting started, its only been 35 minutes and there is still 90 more to go. 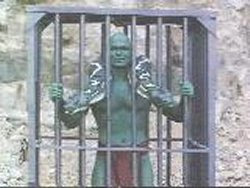 Truly one of the wildest movies I've ever seen, this is is a long movie that never seems to end. Zuma returns, there's a child, years pass and we get to see one of the worst wigs in movie history. Its a dense, often talky movie that wears out its welcome after a short time. As I watched this I kept hoping that there would be a commercial or two to break up he monotony. I'm completely unfamiliar with the comic its based upon, but I'm forced to wonder if it was really necessary to compress the entire run into 125 minutes.

Zuma has an interesting look. The snakes on his shoulders are clearly mechanical, however considering when and where tit was done its actually quite good.

Over all this is not something you really want to waste your time on. If you run across it take a pass. If you really must see Zuma in action then see if you can find the trailer on line or if you can talk your way into borrowing it from some sucker who owns a copy.