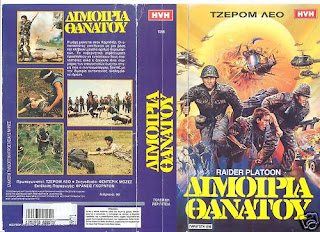 From Jack Jensen’s When The Vietnam War Raged… blog:

I haven't been able to dip up anything on this film so if any of you have got any info I'd appreciate it a lot. Like is the year of production correct? What else has the director done? Cheers.

UPDATE: I found something! It's the absolutely ONLY thing that turns up when I google for the film (other than THIS HERE BLOG!! Haha) and obviously it had to be from the seller's (Onar Bill) website:

SYNOPSIS: Super obscure film, ignored by imdb AND google!!! It's an 80's Filipino Marines squad vs evil guerrillas! And the latter are the nastiest and most sadistic scumbags I can remember! Check the intro sequence with the villains torturing their captives. they chop hands, slash necks, pull out intestines etc, in a gruesome opening sequence. The rest is equally brutal... check what they do to a woman they just killed over her killed husband! While I was checking this out, my wife in the next room commented ironically: "such a quality film... just bang-bang bang and aargh!!"