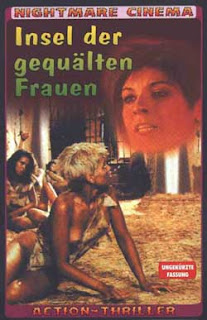 [A Belgian production shot in the Philippines. Released in West Germany as “Insel Der Gequälten Frauen”] 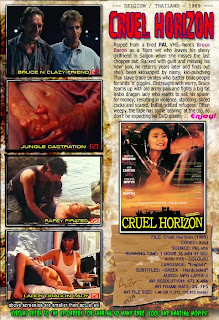 Bruce Baron on the making of Cruel Horizon (from the interview on the Nanarland website): 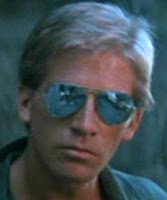 The film was eventually sponsored by the Belgian Ministry of Culture. I met the producer/director, Guy Lee Thys, at a reception in the Belgian Embassy in Manila in ‘84, when I was dragged along there by a Filipino chick I was going out with, who was paid to appear as a model at a fashion show that they had at the reception. Guy was in Manila, scouting locations for the film and trying to get laid. We hit it off and I started hanging out with him, introducing him to the local glitterati and generally misbehaving Manila style, pre-AIDS. About a year later ['85] he got enough sponsorship to shoot a few scenes, mostly from Stella Artois®, which he intended to string together as a ‘trailer' to use as a promo to get full sponsorship. He cast me in the lead and cast the other major roles with Filipino locals, including one chick named Jesse Elmido, [a newcomer] as female lead, who happened to be the best looking chick that he managed to screw during his previous sojourn [he eventually married her and lived to regret it, but that is another story]. Anyway we shot for about 10 days, using my famous Roxas Blvd. pad as the production office and interiors set.

Then he disappeared back to Europe to find the money, and didn't turn up again until fall of 1988, when we shot 45 days of principal photography, mostly along the Batangas coast. By this time he was living with Jesse and devastatingly drunk most of the time. She actually encouraged his drinking because it made him easier for her to ‘manage' him. More than once he had to go sleep it off in the middle of the day, and that meant somebody had to take over, or we lost the day. One love scene he didn't want to direct because Jesse was nude in bed with me and the script called for me to play with her tits. He got jealous and drunk and passed out. It was in the studio and we were set up and we had to do it, so I just called sound and action and we did it. That was how it started, I think. The precious little Belgian A.D. was too wrapped up in his own little job and unwilling to accept responsibility, so I did. Surely the film suffered for it in a few scenes, because I had no direction, and was not up to the task of acting and directing at the same time. It only happened a few times.

It wasn't a simple film. It was a documentary/drama set in about Vietnamese refugees being forced into white slavery in , loosely based on news clippings and other reports of horror stories from , shot SoF and 35mm, with a full imported Belgian crew. Eventually, we wrapped and he took it off to for post. Turned out we needed a few more scenes, which we didn't get to shoot until the winter of '89 in . When released, it had a few days of theatrical release in Belgium and went straight to video. Thus ended my illustrious film career.