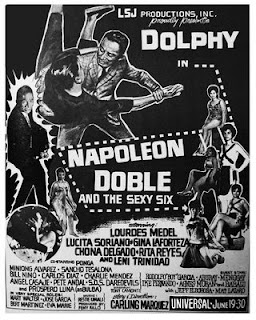 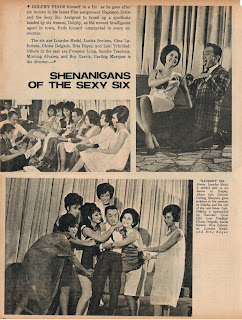 For connoisseurs of Pinoy parodies, the recent appearance on Filipino VCD of Dolphy's Bond-like action comedy Napoleon Doble And The Sexy Six signals an unearthing of grail-like proportions. I realize it's hard to be entirely objective about comedy, and even more so when you're removed from its host culture by time, language, and the shared experience of growing up in the shadow of Dolphy's schtick. To this pulp-addled brain at least it was worth the wait, but keep in mind I've already devoured over twenty of Dolphy's back catalogue and haven't even made a dent. If you're a casual Trash Tourist, a cursory examination of Napoleon Doble...'s discs reveals a film that looks, sounds and feels like Dolphy's James Batman, also from 1966. Actually you're not far from the mark: it's a similarly crazed surfadelic romp through appropriated Sixties pop culture, with wildly tilted camera angles, cartoon goons and go-go girls, and the omniscient Dolphy filling almost every frame – and sometimes twice! However, in order to rescue Napoleon Doble... from history's “like James Batman but not as silly” bin and place it into some kind of cultural context, there are a number of facts to consider. 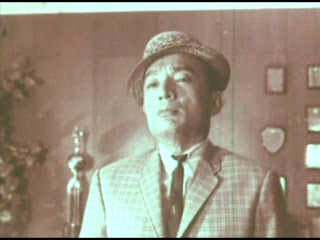 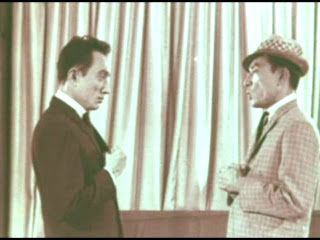 In a career covering an astounding 250-plus features to date, 1966 was Dolphy's peak year: starring roles in nineteen features, or almost one movie a fortnight. In Dolphy's peak period from '65-'66, Luis San Juan was writer, producer or director for seven films, including an executive producer role for LSJ Productions' Napoleon Doble. The sheer volume of Dolphy's output suggests a much larger, well-oiled machine grinding out quickly-made and comfortably generic - though certainly not inferior - product, with the Dolphy brand ensuring audience goodwill and return trade. In the '65 to '66 period, Dolphy's films were primarily “goon” parodies, or more precisely, spoofs on then-popular trends with dedicated action sequences; as a trained dancer and physical comedian, Dolphy was a natural, if unlikely, action star. In contrast to his lighter Sampaguita vehicles from the Fifties and early Sixties, Goon Comedies downplayed frothy romance and song and dance numbers in favour of relentless stunts and on-screen fist fights. In his western spoofs [1] he's eyeball-to-eyeball with a baddie in a black hat and an army of apes in stetsons; in Pambihirang Dalawa: Sa Combat (1966) it's him, Panchito and a bevy of women in long skirts against the Japanese army. 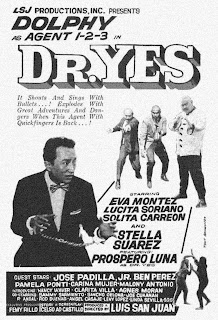 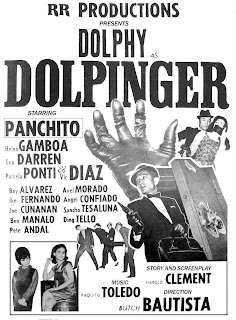 During Dolphy's busiest phase, the genre du jour was the James Bond craze. Most Western-influenced film cultures were churning out one gadget-laden spy caper after the other, and the Philippines' copycat industry was more eager than most. Following Goldfinger's worldwide release in 1964, no fewer than twenty Pinoy Bonds appeared within a manic two year cycle. And, as every popular Pinoy genre must have its parodic mirror, so too did the Bond Parodies begin in earnest, most notably from the dual Kings of Comedy: Chiquito as James Bandong or Agent 0-2-10 (“oh-two-ten” is a play on “utoten”, the Tagalog word for “farter” for “fart-face”), and Dolphy as Agent 1-2-3 (the name suggests a person's been tricked) or in variations on the “Dolpinger” theme. In Dolphy's filmography from 1965 to 1966, a minimum of fifteen features can lay claim to parodying the spy genre, or at least include elements of the Bond films [3] – and that's a considerable number of Bondian villains with goon armies at their disposal. 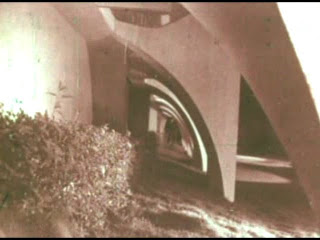 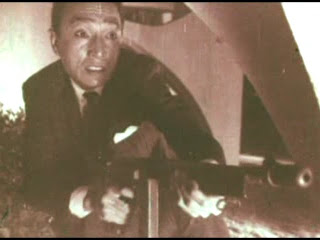 As Napoleon Doble, Dolphy trades in his secret agent badge for one with the NBI [4]. The film opens in wham-bam style, with Napoleon shooting it out with machine guns as his nemesis Elias (also Dolphy, much-gnarled but, under the latex buboes, still recognizable) robs a bank and makes a hasty getaway. The Thirties gangster-style car crashes and somehow Elias drags the stolen loot back to his mansion hideaway, where Girlfriend Number One (Lucita Soriano) and his trusted scientist-slash-plastic surgeon (Carlos Diaz) perform a face-changing operation – under strict orders to make him look JUST like Napoleon Doble. 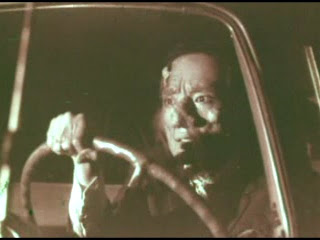 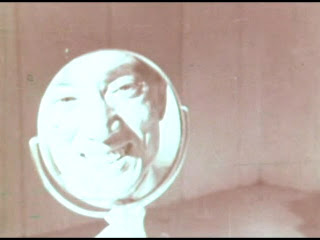 Elias, the dark Hyde to Dolphy's likeable Pinoy Everyman, is a hoot: cold, calculating slits for eyes and a sardonic smirk, and with a harem of five girlfriends on call, all top-shelf Pinoy starlets who are forced to line up and have their cocktail frocks ripped down in one of Elias' cleavage inspections! Not content with merely a Foxy Five, Elias decides to recruit a sexy Sixth, and as fate would have it, stalks the gorgeous Anna (Lourdes Mendel), a dancer at his own nightclub – and, the same girl courted by Napoleon. Anna, of course, only has eyes for the REAL Napoleon, yet Elias is undeterred, and takes her refusal to bare her cleavage as a sign she's the new Number One Girlfriend, a position jealously fought over by the Sexy Five in a messy, drunken, all-in catfight. A complicated web of mistaken identities – that old hackneyed comedic standby! - ensues, with Elias stealing NBI files while posing as Napoleon, and ends with Napoleon and Anna trapped in a cell in Elias' mansion at the mercy of a leering, power-hungry and clearly insane Elias. 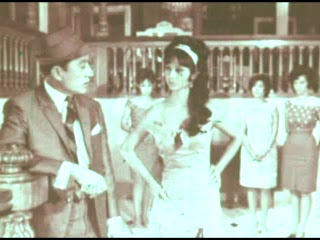 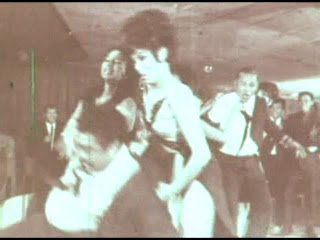 Viewed as part of a much larger whole, Napoleon Doble And The Sexy Six makes perfect sense. Dolphy's individual films are elements of a much grander story arc, almost a meta-narrative spread over fifty-plus years, with its main protagonist growing older disgracefully, and his supporting cast and crew entering and leaving at will, more often than not becoming familiar parts of the background scenery. Wives, girlfriends and siblings appear, along with children and eventually grandchildren. Families are at the core of Filipino culture and is reflected in the Dolphy's own film company RVQ Productions: from its inception in 1967 and through its Glory Days into the Eighties, it was a dynastic studio dynamo for the Quizon clan, and Dolphy more than generously shared, and still shares, the limelight. The cherry-picked icons from both foreign and domestic pop culture, the interchangeable plotlines of Western spoofs and goon comedies, domestic barrio soap operas and their ilk, the recycled characters (the droopy-shouldered Ompong, the flamboyant Pacifica Falayfay), the movies, radio shows, stage performances and TV series, are all episodes of a seemingly endless variety show, with Dolphy centre stage as its amiable emcee.

Although Dolphy's Napoleon Doble presents himself to the filmic world as an undercover policeman, he's essentially Dolpinger: a government representative of the forces of Good, facing off against a Super Villain with a lair choked to the brim with Bondian gadgets (a pen, for instance, that doubles as a Ray Gun!), not to mention his very own Q on tap. Bond allusions aside, Dolphy takes characteristically low swipes at other Sixties pop icons, not least The Man From U.N.C.L.E. - Napoleon “Solo” being the obvious reference point, plus a sizeable portion from U.N.C.L.E. feature The Spy With My Face (1965). Let's not forget the Pink Panther series, notably Ponga's Kato-like Mr Tan [5], a Chinese caricature saved by Napoleon during the bank robbery, and whose housebound karate fights with Napoleon usually end up trounced by the equally chop-frenzied maid (Aruray). 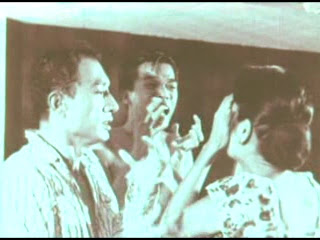 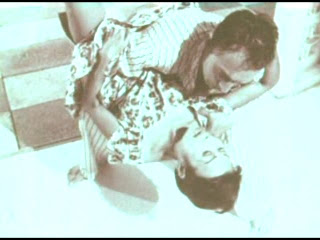 “Thrifty” is is not a surprising term for a low-budget quickie, and there are constant reminders of the budgetary shortcomings, from the use of limited locations (Elias' mansion, with its now-familiar warren of rooms, balconies and shadow-lined stairwell is put through the ringer, as is his nightclub) to its tin-can sound recording and compact, cut-to-order thrills. As rough as the seams are, however, the film never threatens to tear a hole in its pants' seat; LSJ Productions' camera crew are imaginative with their comic-strip framing and composition, not to mention weirdly effective though glaringly primitive lighting techniques, and Restie Umali's horns-and-bongos jazz score, despite its occasional Bond stings, never becomes glaringly cliched. Like most populist Pinoy films, Napoleon... trots out its regulation array of marquee-value “Special Guests” like well-rehearsed sideshow exhibits - the big-chinned Babalu (one of Dolphy's regular sidekick in his later films) makes a blink-and-he's-gone cameo as a shirtless waiter, crone-ish Menggay tries out as the Sexy Sixth (and is accused of being less than human!). It's modest yet easy money for an afternoon's work, and all are welcome faces, along with the remainder of Napoleon Doble's cast: Sancho Tessalona, Rodolfo “Boy” Garcia, Prospero Luna, the SOS Daredevils and many others, some of the hardest working actors and stuntmen in show business and equally at home in a Fernando Poe Jr or Dolphy and Chiquito flick. 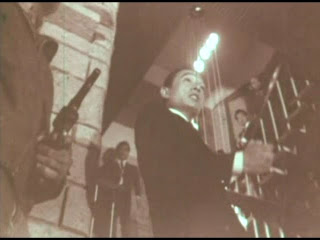 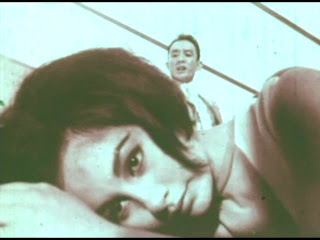 Likewise, Luis San Juan successfully balanced straight action films and “goon” or action parodies over a thirty year career as producer/writer/director – from Dolphy and Chiquito vehicles to Ramon Zamora and Rey Malonzo chop-sockeys. It's this double helix of thrall and gall, the essence of Goon combined with the sheer chutzpah of James Batman and company, that makes Napoleon Doble And The Sexy Six a satisfying Sixties pop cocktail, brimming with pure unadulterated Pinoy Pulp.

[5] Burt Kwouk as the karate-crazed Kato makes his debut in the second Pink Panther film, A Shot In The Dark (1964).