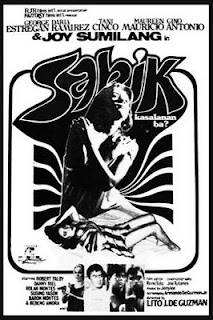 Review by Jared Auner from his Worldweird Cinema blog:

Ubiquitous Filipino sexfilm actor Estregan sets in motion a sleazy chain of events when he successfully seduces his stepdaughter (Mauricio). While her mother, his wife (Ramirez), is none the wiser the younger daughter (Sumilang) spies on their heated couplings with guilty excitement. Inevitably his attentions turn to this curious virgin. Although at first she resists his affection, it’s only a matter of time before she relents, in surprising hardcore fashion. This being a rather typical erotic melodrama, she soon finds herself in a family way. Wanting to hide her and her Stepdad’s shame, she agrees to marry the young good looking suitor (Cinco) she had previously found little time for. But while young love blossoms between the two, his dedication to getting ahead at his job soon frustrates our young heroines escalating sex drives. She finds sweet relief in the arms of her husband’s best friend (Antonio), in another extended hardcore sequence. But even he cannot give her all she needs. So she begins to entertain most of the single men in her neighborhood, as the local busybodies whisper in earnest. Unavoidably, her husband walks in on her rigorously boffing his closest friend. Slipping away unnoticed, he plots his revenge, poisoning a dinner he skips out on, killing his pal and framing his wife. Overpowered by the guilt of her unscrupulous actions Sumilang takes the rap and resolves herself to a life in prison. But her husband is crushed by his own guilt and soon confesses to the crime. In a parallel tragedy, the karmic wheel set in motion by Estregan’s transgressions turns back onto him. His wife catches him passionately screwing her eldest daughter. Turning his own gun on him (is he a cop?) his wife murders them both. But somehow we get a happy ending. Years later, Sumilang’s husband is released from jail and is reunited with his wife and daughter, back to a karmic square one.

Although hardly the most original or clever plot, SABIK keeps the sleazy melodrama coming at a pleasing pace. It never flags, consistently tossing a soft or hard sex scene at you every ten minutes or so. The film-making is proficient but uninspired, never reaching the delirious quasi-art film highs of other Filipino sex productions like SILIP or HUBO SA DALIM. But it does manage to keep its drama just enough on the boil to hold one’s interest. The tone is deadly serious throughout, blessedly never copping out to a superfluous comedy subplot like so many Southeast Asian movies. In fact the only concession to lightness comes at the end of the film and it feels phony. The downward spiral of the story is too neatly resolved, running against the grain of the film’s direction. But that said, the plot is never very complex or rich so it’s not much of a betrayal. The only real point of the movie is the fucking, which it provides in a number of soft scenes and two extended hard scenes. But the hard stuff is rather unimaginative and unarousing, consisting mostly of George Estregan and/or Gino Antonio’s wrinkly balls slapping mercilessly against poor Joy Sumilang’s anus. Rather it’s the sleazy incestual undertones which mark out SABIK as unusual and interesting, and the way these taboos lead to the eventual disintegration of the Sumilang’s moral character. Not that her performance carries any of this dramatic weight. In fact all the performances are rather flat, with only Filipino b-movie vet Estregan providing any charisma, although entirely of a sleazy, reptilian bent.

SABIK was one of a number of hardcore sex films made in the tumultuous mid 1980s in the . During the year of SABIK’s production and release, 1986, perhaps as many as 30 of these “pene” movies (because they featured scenes of “penetration”) were released, although this is one of the most famous and controversial. Star Sumilang provided some real “Pinoy Babylon” infamy to the film for her disputed claims to be the illegitimate daughter of famous Filipino actor Romeo Vasquez. Her career only lasted a few films, not unusual for this period or this genre. The list of actress casualties of the ‘Bold’ and ‘Pene’ era is startling. It was apparently not a good time or place to be a sex film performer. That many of these girls were rumored to be legally underage at the time of many of these productions only adds to the unhealthy veneer of the industry and the films themselves. This was one of only a handful of films director Lito de Guzman made during this time (NAGAAPOY NA GABI being another), and was his last until 2000 when he began to making a series of contemporary sex dramas. Why Guzman suffered this long drought is unknown, although the infamy of the movie in the may have something to do with it. Previously an assistant director on low-budget action epics, he seems to have carried little of the auteurial weight that Peque Gallaga or Celso ad Castillo threw around in acclaimed hits like SCORPIO NIGHTS or VIRGIN PEOPLE and so could not rise above his porn director stigma. Although no great work of art, it’s wonderful that SABIK is still around to view as so many of these fascinating films now seem to be lost forever. If you can find it, check it out, it’s a rare view into a cinematic world now largely forgotten.