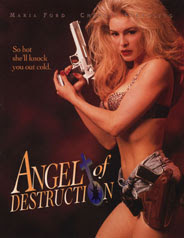 Since the inception of this cathedral of bad cinema, we have sat through some really awful shit for you. Movies so bad, that Ralph Macchio himself would turn down scripts for them (actually thats bullshit, he would mow my lawn at this point in his career....which would be a nice compliment to Lorraine Gary who does my laundry currently). Today we have a Bad Movie Knight first. I have failed you. I have met my match in the form of Angel of Destruction.

To date, I have been able to view without interruption some sensational road side disasters.....but Angel of Destruction lasted all of 13 minutes before I rapidly excised it from my video player. I have not seen such awfulness since I watched the Bronx Executioner (which for the record I manage to view in total, however in fairness, I did so to get the name of the director so I could hunt him and his family down for taking those 2 hours of my life).

Angel of Destruction does of course contain some incredibly bad acting, and bad story, which are the cornerstone of bad movies, but it contains one giant fuck you to us, the viewers. The title is Angel of Destruction, which implies, yes this movie is most likely going to suck dead llama ass, but at least there will be some hot chicks and sex right? Nope. The 'Angel' is anything but. Actually she is butt. She looks like my ass. Come on. You couldn't find one attractive woman for this part? When I saw the cover, which boasted the tag line 'So hot she'll knock you out cold'.....I was immediately skeptical. She fails the hot part, and aside from passing out from sheer disgust at seeing her unclothed, there is no way this methodone clinic reject could knock anyone out.....unless her secret weapon is her breath which contains liberal helpings of whiskey mixed with the rotting smell of teeth, decaying from the over indulgence of cocaine.

Nudity. Sure there is plenty of it. And yes I only watched one quarter of an hour of this film. The nudity however, is provided by women, that should be wrapped up like mummies and buried in underground crypts for eternity. The breasts in this movie defied logic. Spanning the spectrum of natural breasts that looked like fried eggs, sunny side up style, that have fallen behind the grill onto the tile floor at some nasty greasy spoon, to medically altered franken-tits, that I could have done a better job creating with a power drill and a tube of bathroom caulk. Ladies, boobs aren't supposed to look like bottle nose dolphin heads.....unless you are trying to bang Aquaman you should obtain a refund. Back to Angel....ugh. The only way to keep from seeing her naked was to pull the tape out. I've gotten more aroused watching Faces of Death, and honestly less disgusted.

Heed this warning. This movie is bad, in a very, very, bad way. I would recommend something from our Costner collection before travelling down this highway of visual doom. Angel of Destruction. Fuck You.