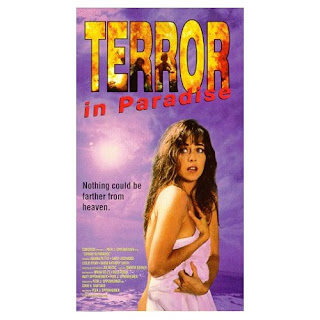 [Released on VHS by Home Video] 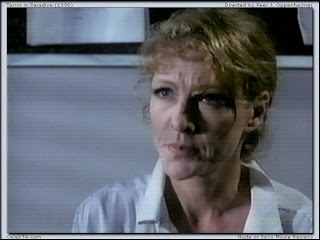 Reviews from the IMDB:

“Jason Kirby and Vickie Evans encounter something other than paradise when their tropical vacation unwittingly meets up with a terrorist force. Soon a quiet romantic getaway has turned into a highstakes thriller of life and death.”

Anyone who has watched a New Horizons film knows what to expect prior to popping it in your VCR. However this film is coupled with producer Cirio Santiago, so the explosions and nudity are magnified.

The script is clichéd, with the terrorist leader, an extremely hammy Gary Lockwood, kidnapping famed plastic surgeon (Joanna Pettet) to alter his facial features. Lockwood has the typical inept goons at his disposal, who need a little more target acquisition training, and their subscriptions to Playboy rescinded.

The plot has a young couple(Ryan & Smith) traveling to what they believe to be a deserted island, for a romp in paradise. When Smith injures himself, they look for help and stumble across the terrorist camp. They must fight against terrorist and rescue the doctor.

This is really not worth watching, the acting is poor, and the script seems to be one of those continuously recycled B-Rate scripts. Although Leslie Ryan is extremely beautiful, and the director realized he needed to show her naked on numerous occasions for anyone to rent this clichéd yawner.

Here is an example from a familiar genre: Innocent Young People Being Hunted Down By Heavily Armed Evildoers, the causes of the pursuits commonly being that the prey have stumbled upon something hidden and of which they should not have knowledge. Action begins in this incident-stuffed melodrama as Jason (David Anthony Smith) and Vickie (Leslie Ryan) rekindle the flame of a recently suspended relationship by sailing in his small catamaran, to an isolated and unidentified island that Jason believes is unoccupied, for a day of frolic and amour, only to find deadly danger waiting for them. For upon the island is reactionary and dishonoured United States Army Major Douglas (Gary Lockwood), who has jumped bail following his arrest for using overzealous techniques (including torture), of prisoners, along with a group of his followers, each of whom in turn finds the presence of Jason and Vickie to be highly intrusive. Douglas has kidnapped a renowned plastic surgeon, Dr. Fletcher (Joanna Pettet) in addition to her husband, and with the latter's survival as forfeit, the Major has compelled the doctor to create a new face for him antecedent to his leading a bombing assault upon the Golden Gate Bridge in San Francisco, as means of influencing public opinion against perceived international "terrorists". While the carefree young couple visits the Douglas compound, there hoping to locate a source of medical treatment for a lacerated hand that Jason suffered while opening a food tin, an operative of the C.I.A. lurks about the island, taking photographs, but after his boat has been destroyed by the Douglas gang as he attempts to flee, he is washed ashore, and chanced upon by Jason and Vickie, to whom he explains, as he lays dying, details of the machinations of the mad Major. The real fun begins at this point, with farcical elements predominant, as each member of the Douglas entourage takes a crack at the young couple during ensuing scenes, employing a helicopter, Molotov cocktails, machine guns, etc., and of course with remarkably poor accuracy on display from renegade military personnel and their mercenary comrades. Even Douglas himself takes part, his face and entire head swaddled in bandages, yet apparently free from risk only hours after completion of surgery, with Jason and Vickie, as must be expected by viewers, managing to survive an ongoing series of absurdly repetitive and predictable assaults. These cause the film to be tiresome as all memory of the original plot is debased by interminable "action" sequences, with nearly every line of dialogue foretoken while the performances of the players are straitjacketed by the production. An exception is Ryan, a natural actress with ability to make something meritable of her formulaic part and inane lines as she busies herself by routing dangerous opponents.
Posted by Unknown at 6:19 PM