It’s been two years since my last trip to the Philippines, but I’m finally coming back to my spiritual homeland! It’s almost three weeks of interviews, archive research, lectures and screenings, and pitching various projects to Philippines’ funding bodies.

So far the schedule is filling quickly:

- A talk to post-graduate students at Ateneo University, 2pm on Tuesday 19th October
- A Halloween screening at Fully Loaded, 31st October – more details to come
- “Philippines Grindhouse” lecture and screening at the UP (University of Philippines) Film Centre and APFI (Asia Pacific Film Institute), dates and times to be confirmed

To all my friends and colleagues in the Philippines, I look forward to seeing you soon! 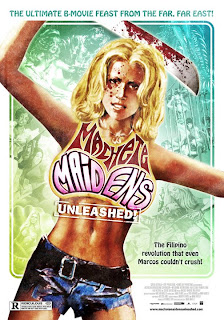 Long-time readers will no doubt remember that I have been working on a documentary, “The Search For Weng Weng”, on the midget James Bond of the Philippines. Well, a lot has happened since I first picked up the camera almost four years ago. My producer Veronica Fury of Fury Productions pitched the project to ABC TV last year, and the word came back: allow the project to evolve into a documentary on B-filmmaking in the Philippines, and you have a deal! Funding came through from ABC TV, ABC Commercial, MIFF Première Funds, Film Vic, Screen Queensland, and Screen Australia.

At this point I stepped down as writer/director and we offered the driver’s seat to Mark (Not Quite Hollywood) Hartley. He agreed to come on board, with myself as Associate Producer, Research Consultant and Original Concept credits, and set to work crafting an essay-style documentary on the overseas filmmakers engaged in the export trade during the Marcos years of the late Sixties to early Eighties. Now titled “Machete Maidens Unleashed!”, Mark assembled a breathtaking array of intervewees, including Roger Corman, John Landis, Joe Dante and Allan Arkush, Cleopatra Wong's Marrie Lee and Franco Guerrero, and many more (full list is here).

I was privileged to attend the world premiere screening at the Melbourne International Film Festival in July, and was bowled over by its almost unanimous praise. The reviews have been rolling in ever since and there's no stopping the buzz; Machete Maidens' international premiere was at the Toronto International Film Festival, followed by Fantastic Fest in Austin with Mr Corman himself present, Zurich was the European premiere, and there’s still Sitges, Hawaii, Philadelphia, and many more festival screenings to follow…

…including the Brisbane International Film Festival in November!

Yours truly, director Mark Hartley and producer Veronica Fury are proud to be invited by this year’s St George BIFF to introduce the film, and hold a Q&A after the feature.

…or at a second screening on Sunday 14th November, 2:00pm at Place Barracks 1

Details, tickets, programs and assorted propaganda etc are at www.stgeorgebiff.com.au 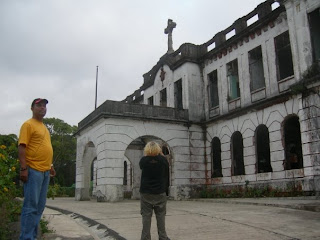 Jim Gaines and I outside Cleo Wong's "monastery" in Baguio, November 2008
“CLEOPATRA WONG/ONE-ARMED EXECUTIONER” DVD OUT NOW...AND WE DID SOME OF THE BONUS FEATURES!

MPI asked for access to the interviews I'd shot in Manila with the casts and crews, including the only ever on-camera interview with the late Bobby himself (see here, then follow the “Bobby A. Suarez” tag for more info and interviews). They ended up using ten minutes of the Bobby interview, plus my chat with One-Armed’s Nigel Hogge; Mark Hartley’s interviews with Marrie Lee, Franco Guerrero and Joseph Zucchero make up the rest of the package’s incredible bonus features. Needless to say we're incredibly proud to be associated with such a (ahem) classy production!

The DVD was officially released on October 7th 2010 and is available for purchase on Amazon (click here). 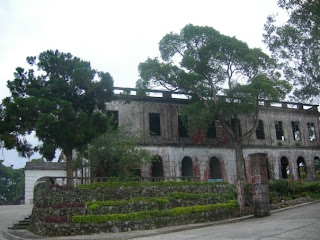 They Call Her Cleopatra Wong: Outrageous pan-Asian actioner starring Singaporean beauty Marrie Lee as the high-kicking disco diva, weapons expert and secret agent Cleopatra Wong. While on holiday in Manila, Cleo uncovers a major currency counterfeit operation, and immediately her kindly but sleazy Interpol chief orders her on the trail. Clad in orange hotpants and white boots, shooting through thin air on a turbo bike and taking on thirty balding wrestlers at once, its little wonder fanboy Asian fetishist Quentin Tarantino cites Cleo as a major inspiration for his Kill Bill series.

In a classy display of Filipino ingenuity, producer/director Bobby A. Suarez milks his international locations for all his micro-budget allows: from a chop-sockfest above Hong Kong harbour and a riotous free-for-all on Singapore’s Sentosa Island to the film’s explosive finale, a thirty-minute undercover raid on a monastery with Cleo and co in nuns habits (and mustaches) tearing up the Philippines countryside in possibly the only entry in the Nuns with Guns subgenre.

Cleopatra Wong is a landmark film in Filipino cinema for a number of reasons - the first international hit from an all-local production as well as start of the hugely successful Cleo Wong series. Canny exploitation genius Suarez gleefully mixes equal parts black chick superhero Cleopatra Jones, the gadget-laden internationalism of James Bond films, and the still-popular antics of Bruce Lee. Never has Filipino cinema been so gloriously derivative, so cheesily Seventies, or so much goofy, jaw-on-the-floor fun.

One-Armed Executioner: "They killed his wife...They cut off his arm...Now he is going to teach them to die!” In One-Armed Executioner's opening frames, a dwarf gets snuffed in a phone booth and dumped into Manila Bay. There's a definite change in tone, much darker than the breezy Bionic Boy & Cleo Wong films: it's a simple, brutal actioner, the Philippines only and much-belated entry in the 'amputee revenge' cycle started book-ended by The One-Armed Swordsman (1972?) and The Crippled Masters (1982).

Cleopatra Wong’s Franco Guerrero has cultivated a more suave, almost Wayne Newtonesque demeanour playing Interpol agent Ramon Ortega. He loses white blonde trophy wife Anne to a drug baron's henchmen and turns into an embittered One-Armed alcoholic beaten up by Two-Armed dockside bums. His former boss tracks him down and sends him to a One-Armed kung fu training camp, turning the digitally-challenged agent into a One-Armed killing machine (like you can't see the arm under his shirt!). His revenge spree nets scientist Dr Henderson (former Green Beret Colonel, then-current bar owner and ubiquitous character actor Mike Cohen), the henchmen (Pete Cooper and Jim Gaines), and eventually the scumbag Edwards (Nigel himself, chased by Ortega's helicopter through a swamp - in a boat with a swastika painted on the side!
Posted by Unknown at 3:53 PM