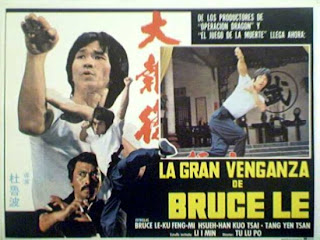 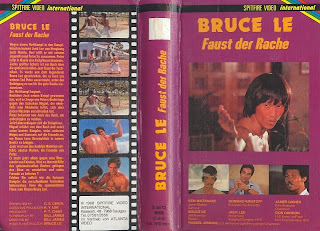 [NOTE: Bill James was an American-born producer with Bates Alcantara Advertising Agency and was responsible for selling McDonalds and Adidas to the Philippines; he later ventured into filmmaking via Mr Lim] 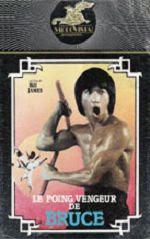 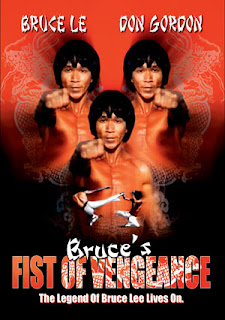 ‘The Legend of Bruce Lee Lives On’, the tagline on the cover of a certain American release screams. It most certainly does, but sadly not in this film. ‘One of the most thrilling films on the topic Bruce Lee’, the covertext of the German tape release states. That’s a rather shameless exaggeration, I have to say. BRUCE’S FISTS OF VENGEANCE is a hilarious Brucesploitation epic with a great cast (who can’t act if their lives depend on it) and some hair-raising moments of incompetence. Let’s take a look at the stars first. According to the German cover artwork, we have: Bruce Le (Jett Kune Do Master), Jack Lee (Hong Kong Kung Fu Champion 1979), Romano Kristoff (European Tee Kwon Do… what? Neither master nor champion?), Ken Watanabe (Japan Master Samurai), James Gaines (= Jim Gaines, Kare Shukokai Champion), Don Gordon (U. S. Kemo 1st Place Int’l. Championship 1975), and Russell Jenkins (U. S. Air Forces Light Heavyweight Champion). Sounds impressive, doesn’t it? Romano Kristoff (DOUBLE EDGE, 1986), Ken Watanabe (NINJA WARRIORS, 1985), Jim Gaines (BLACK FIRE, 1985), Don Gordon (WHEELS OF FIRE, 1985), and Carla Reynolds (RAW FORCE, 1982) appeared in many low budget Filipino action flicks throughout the 1980s, and Bruce Le (CHALLENGE OF THE TIGER, 1980), born as Kin Lung Huang, was one of the most famous Bruce Lee ‘clones’ after Mr. Lee’s untimely death. 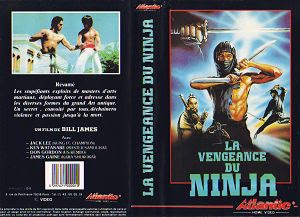 So the big question is: can a movie with such a fantastic (in my opinion, anyway) cast really be bad? Oh yes, it most certainly can. From a technical point of view, BRUCE’S FISTS OF VENGEANCE is a disaster. Period. The acting abilities of all involved, the dreary camerawork, the inept editing, the below average score, the uninspired and dull direction, the jaw-dropping errors in continuity… really, this flick is a catastrophe in that respect, and not a small one. Luckily, it is very entertaining too. It kicks off with one of those nice training sequences, where the master (Bruce Le) shows some more-or-less impressive moves that are repeated by his students. In the background, on the wall, there’s a poster of the real Bruce Lee. This poster (or a similar one) makes quite a few appearances in the course of the movie. You can make a drinking game out of this fact. Each time the poster can be seen, you have to empty your glass. Good luck! Bruce Le is perfectly trained and he knows how to fight, but he lacks the charisma that makes Bruce Lee so unforgettable. It doesn’t help that he tries to imitate his model for all he’s worth. Bruce Le is also credited as the fight director, and the (many) fights are certainly the best part of the film. In the middle of the flick a Ninja appears (well, the guy’s dressed like a Ninja), but he is no match for our hero and is dead before you can say “Oh… a Ninja!”. No more Ninjas, but at least a Samurai makes an appearance later. There are a few scenes where people are training with nunchakus and this looks very impressive. Credit where credit’s due. Jim Gaines has a thankless role as a student who is not only beaten up by Jack Lee but also humiliated quite a bit. I could also have done without the brutal cockfights that go on until both cocks lie on the ground motionless. 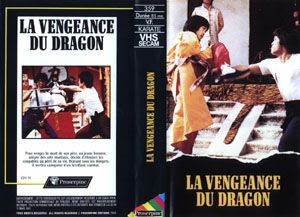 BRUCE’S FISTS OF VENGEANCE doesn’t take itself too seriously… there are a few humorous moments thrown in for good measure, sometimes during the fights. The German dubbing is even worse than the actors; as impossible as this sounds, it’s true. The girls are nice to look at though. As a motion picture, BRUCE’S FISTS OF VENGEANCE is stunningly bad. However, as a cheap Brucesploitation flick, it serves its purpose and – because of/despite its countless shortcomings – it’s very entertaining and amusing… for all the wrong reasons! I hope that Bruce Lee doesn’t rotate in his grave, but I’m quite sure that his die-hard fans are annoyed black and blue about this particular chop socky flick. Fans of bad movies, however, should love this one. The absolute high (or low) point (depending on one’s view) of this Eastern is the overlong showdown that has to be seen to be believed. Yes, it’s that great. And with great I mean hilarious. “Come on, let’s go home, Peter”, Bruce Le’s girlfriend says in the end, and he replies with “Yes. Kiss me!” The End. I have only seen a handful of Brucesploitation flicks so far, but if all of them are such stupid, laughable rubbish I’ve got to check out more of ‘em.