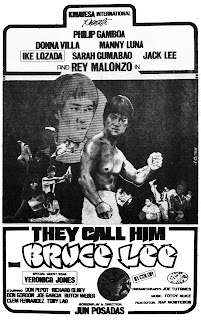 "A priceless book on the fighting techniques of Bruce Lee has surfaced in . Tom Durbin, and American gangster, flies to and joins up with a local gang to steal the book. Rey, who is guarding the book, must use all his martial art skills to defeat his enemies and save the book from evil hands. The battle explodes bringing much bloodshed and violence before justice triumphs."

Now if that was what the movie was really about, it wouldn't be half bad. The premise is good, it was just carried out very very very very poorly. First of all the book is in the , not Hong Kong. The book written by Bruce Lee is called "Ninjitsu Fighting Techniques", and was passed on the his close friend Jack Lee. Jack Lee is billed first in the credits, so you would assume he is the star. Wrong, he is hardly in the movie except for some scenes at the start. He gets in some fights, and is surprisingly good. He seems very flexible and can pull off some good kicks. With better choreography he would've been much better. Jack passes the book onto Rey. After his girl is kidnapped, Rey must bring the book for ransom and battle Tom Durbin and his legion of fighters.

Rey and his idiotic buddy Tito get the most screen time...why? Rey, Tito and associated characters are very annoying and I was hoping to see any of them get their ass kicked. Now the fights take place mostly at the start and the end of the movie. The choreography is kinda sloppy and slow. When Rey is fighting some guys at the end for some reason the show parts of the fight in slow motion. This just helps show how bad the choreograhpy is and that the kicks/punches are missing by feet.

Also the voice actors who dub the movie are ridiculous. I'm pretty sure Chris Burke who played Corky on "Life Goes On" dubbed a couple guys. The music is also pretty bad. Their is some music from Enter the Dragon that just keeps looping and looping during the final fight sequence which become annoying. Not to metion the cheesy soap opera sounding music, music that I'm sure is from Tron, and some other stuff that sounds familiar. One more gripe is the movie box. In the top corner there is a little picture of Bruce Lee, but in the middle of the box there is a huge picture of Bruce Le with the title below him. What the hell is he doin' here? Its a sad sad day when Bruce Le is used to sell a movie, that he isn't even in.

The one good thing about the movie was some of the camera angles were kinda cool. There are some good shots of a fight in a hotel room. The other shot is Jack Lee lays the smack down on this guy. The camera falls to the ground and Jack tosses his big ass sunglass down on the guy. Jack starts fighting with another guy. The camera zooms in on the sunglasses and in the reflection of the lenses we see Jack fighting this guy. Not ground breaking stuff, but a little more technical that what we're used to seeing. A screw up happens when Tito is in bed about with this chick and they are making out. The camera man starts and the end of the bed and walks around to the side and when he does this you can see his shadow on the bed.

Oh yeah I almost forgot, try not to watch this movie, okay?