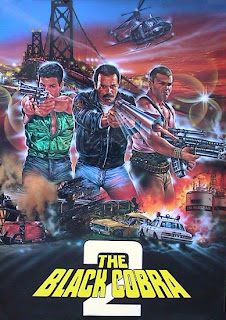 Of Margheriti’s And Miniatures: An Interview with Edoardo Margheriti by Paul Cooke

On behalf of Cinema Nocturna, in conjunction with Antonio Margheriti.com, it is a great honor and personal pleasure to chat with Euro film maker Edoardo Margheriti... Benvenuto Edoardo.

I will never talk of Chat Silayan, the actress of The Commander, who I was engaged to for three years... Oops... I've just made it!

Was your appearance as an actor in the 1980 made The Last Hunter your first or did Antonio place you in any background scenes at an even earlier age?

The first time I appear I played a stunt in Hercules Against Karate in 1973 (I was really doing karate at that time). I was in the fight scene, inside of a pub, between a group of sportsmen and the heroes. Then I played a bigger role in Cannibal Apocalypse. I’m the policeman who arrests Bukowski (John Morghen’s character) and gets bitten, then I get infected and try to eat alive a police woman, until the captain shoots me. Then I play one of the marines in The Last Hunter (I am the one who dies in the Vietcong trap), a big role even if I do not remember the characters name. After that a part in Last Blood, aka Tornado (the machine gunner of the chopper and of the ground battle in the village)… and other scenes many times. In Jungle Raiders I’m one of the mercenaries who dies exploding with a pineapple can full of dynamite. Even in his last film Virtual Weapon I appear as the bald gangster at the airport and in some chase and gun fight sequences. I’m also the bad guy who stunt drives the black car at the end of the trailer.

Your involvement with your father was highly prevalent throughout the Eighties, particularly during the productions where many of the great Euro action films were made by Antonio. Another of the films you appeared in (although uncredited for your role as a police officer) was the incredible 1980 movie Apocalypse Domani aka Cannibal Apocalypse. Two particular poignant moments come to mind, one being the awesome gaping hole special effect of the shot gun blast through the back and out the stomach of Giovanni Lombardo Radice (perhaps best known internationally as John Morghen). The other moment being the visual placement of a poster for Umberto Lenzi’s From Hell To Victory outside the cinema complex, briefly observed in the film. What was your reaction to first witnessing that spectacular shotgun blast effect, and was director Umberto Lenzi grateful for the free advertising for his own film?

We used that poster for From Hell To Victory and the film projected inside the cinema, for the simple reason that it was a property of the same production so we did not have to pay any rights (a sad materialistic reason, huh!?). For the effects on Giovanni (John Morghen) Radice we were not happy at all, because the effect was supposed to be more visible and in a single camera shot. The intention was to show once more after the first blast the policeman shooting again with the rifle. But it did not come out perfectly, so in the film it was divided into two cuts. The effect is good but our sketch and idea was more impressive (also the lens used in the camera, for lighting reasons, was not the one supposed to obtain a prospecting compression and the cop was very small in the frame).

At what age did you join the Army and did you later find the experience of serving for your country to be of good technical use, as well as benefiting stars and extras alike upon the sets of those jungle war movies?

I went to ‘serve the country’ (well!) at age 22, for almost a year in 1981. It was very useful because I was a Specialized Armourer (well I’m not sure if this is the correct description but I was taking care of weapons, and an expert for training in guns use). In those films very often I ‘save the day’ by repairing rifles or machine guns which did not work properly because of my gained experience. Especially there was the M60 (Rambo’s machine gun), which was never working properly with blanks. Also in the Army I attained good experience with explosives, and within our job (more similar to terrorist that movie makers) this was very useful.

English Actor Lewis Collins had made his name as an Action Hero playing the role of Bodie in the late Seventies television show The Professionals and was an ideal choice for the transition to big screen action star. He actually first found fan appeal in the British comedy show The Cuckoo Waltz. Ironic then that he should successfully feather his nest of fame playing against type in a hugely popular tough TV show, and the highly entertaining Antonio Margheriti directed action flicks Codename Wild Geese, Commando Leopard and The Commander! How did you find Collins to be on a person-ability level, as he always seemed to be the quiet gentleman off-screen, and was there any truth to the rumour that he was down to do a fourth action movie for Antonio?

No, he was never supposed to do another film with us, and Antonio did not really love him in the way he did with his other actors (David Warbeck, Lee Van Cleef, Klaus Kinski). Lewis Collins was really a nice English gentleman though, never complaining or giving us trouble.

Amongst the cast for Yor: The Hunter From The Future aka The World Of Yor is Antonio Margheriti regular Luciano Pigozzi (more recognizable amongst a multitude of credits as Alan Collins), in the role of Pag. He is perhaps one of the most recognisable faces in Euro ‘B’ movies spanning several decades. How close are you and the Margheriti family to this stalwart of the cinema?

He was very, very close to us … but during The Commander (a film he was not with us for, but was making a Lucio Fulci film very near by as a production assistant - Luciano also worked unaccredited in production sometimes) we had a discussion regarding part of the local crew in the Philippines, which came to work with us (as agreed since a long time before with me), leaving his film. That evening he was drunk and he started to shout and insult my local production manager… so in the end I had to get him ‘accompanied’ off the set by the security guards, and of course sadly after that we never got along anymore. But he still continued to have a wonderful relationship with Antonio.

Under the Americanised pseudonym of Dan Edwards you directed two sequels to director Stelvio Massi’s 1987 made Cobra Nero aka Black Cobra, a close variation on the Sylvester Stallone movie Cobra. Made in 1988 and 1990 respectively Black Cobra 2 and Black Cobra 3: The Manila Connection proved to be popular within the video market. All three films are action packed and enjoyable despite the obvious budgetary restraints which are even more apparent with your two contributions. How was sitting in the director’s chair for you and why have we not seen the welcome name of Dan Edwards appearing anymore since these outings?

It was the most tiring experience ever, and I was not satisfied at all. Those films are so cheap that if I ever get rich I will buy them all and retire them from the market. In the first one we had a lousy script and no money to adjust it. We were supposed to do the film in Australia, but the Workers Unions were so tough that the producer, after three weeks of pre-production, suspended the film and called us back to Italy. Then we made it in Manila, with a smaller budget because he already spent a bunch in Sydney.

There are two points just to make you understand the situation - there was supposed to be a speedboat chase in Manila harbour… but the day we went out to the set the production crew comes up with one motorboat for the chase, ONE !!! How can I do a chase with only one motorboat!? (not a speedboat at that but a small and cheap little half nutshell !)… So I invented that lousy shooting moment in the harbour. The other story is of the Terrorist in the . We did not have the permission to use minors and the production unit again was not able to get it… so at the end we ended up shooting in an office building without seeing even one kid… ridiculous! Also, my complaints are many! There were only two actors (Fred Williamson and Nick Hammond), all the others were from crowds, which we used as actors. You want to talk about the girl!? (I don’t).

After those films they kept offering me projects with too small a budget and without any chance of quality or success, (it was a bad time in where no producer had money) so I decided to give up and wait for a better period. I started to work as a Production Manager and Line Producer. Just last year I had decided to go back to directing and in a few months I’ll start some projects, not very expensive … but well made!

In the Black Cobra franchise was cashed in upon as director Umberto Lenzi’s 1990 film Detective Malone was released as Black Cobra 4. The only real connection here was with star Fred Williamson. Now Fred Williamson fairly recently said of the movie making business, “Give me $20 million and I’ll make you ten films and give you $10 million back!” If that happens and Fred ‘The Hammer’ Williamson were to give you a call would you step back into the director’s chair for more action packed Black Cobra type adventures?

The films and work of Antonio Margheriti and his son Edoardo, along with the Action packed movie world of European Cinema, Explodes with regular news, views and Reviews over at Cinema Nocturna. Please be sure to stop by and visit.