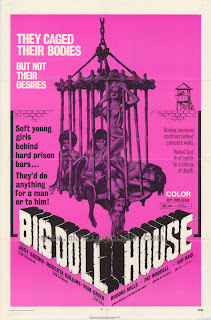 Review by Andrew Leavold [a much shorter version was published in the Australian version of Empire magazine, March 2008]

Roger Corman had toyed with independent film distribution since his Filmgroup days with brother Gene in the late Fifties, while simultaneously feeding product to his direct rival American International Pictures. By 1971 Corman was increasingly dissatisfied with the manner AiP were handling his films – his apocalyptic 1970 counterculture comedy Gassss-s-s-s-s was reportedly butchered beyond belief - and he decided to become a full-time independent film mogul. Thus New World Pictures was born, and having already made the John Ashley/Eddie Romero/Cirio H. Santiago connection in the , a lucrative partnership was sealed. 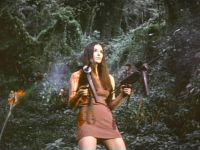 These Filipino drive-in films are a sub-genre unto themselves, with their own unique exotic flavour (admittedly an aquired taste) and skewed internal logic. I call it the “Hooters with Shooters” category, in which uninhibited Russ Meyer-esque beauties run around unspecified Banana Republic hell-holes in halter tops unloading machine guns. They have the four essential B’s – breasts, blood, black actors and banana trees – that make them quintessential B pictures, and along with Corman’s Nurses cycle and assorted cheerleader and stewardess films, they encapsulate Seventies drive-in exploitation. 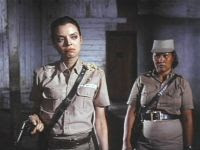 Their real raison d’etre is simple: they made money. An exotic potboiler could be made outside the States for a fraction of the cost, with only a few economy class airfares to cover. The buildings were probably already there in the , as was the jungle not more than an hour’s drive from , and the film-obsessed President Marcos’ army on permanent stand-by as uniformed extras. I should not neglect to mention their secret weapon: the local cast and crew, drilled to world-class standards by the relentless Tagalog-language film industry and, via Eddie Romero and Cirio H. Santiago and various pioneering foreign producers, by the thriving export market.

The Big Doll House was ’s first foray into the “Chicks in Chains” cycle, and under Jack Hill’s assured direction it confidently sets the much-imitated template for future jungle prison adventures. All the now-familiar elements are there: the obligatory shower scenes, cat fights (in mud, no less), and the “New Fish”, here played by Judy Brown as Collier, a not-so-innocent thrown into prison somewhere in Latin America run by a cold Teutonic wardeness named Miss Dietrich (Christiane Schmidtmer, and my first choice in the lead role of Ilsa She-Wolf Of The Philippines). Collier finds herself waist-deep in the cell block’s twisted sexual politics, caught in a cell between angry blonde Alcott (Roberta Collins) and man-hating hooker Grier (third-billed Pam Grier in one of her earliest roles), much to the dry horror of Grier’s hopeless addict girlfriend Harrad (Brooke Mills).

Days are spent cutting cane in what look like fluro pink smoking jackets and, if unlucky, spending the night with Assistant Commandant Miss Lucien as one of her many torturous “experiments”, ostensibly to uncover political information, but we suspect more for her pleasure (and ours). United in their hatred for Miss Lucien, the jailbirds overcome their various power struggles and plan a bust out with the help of Harry (Sid Haig), an opportunist and privateer who does the cell block rounds with drugs hidden in fruit carts, and gets golden one-liners like “Don’t let your alligator mouth take over your hummingbird ass!”

The Big Doll House was an enormous drive-in hit thanks to the perfect balance of cheese and sleaze in a snappy script from Don Spencer (The Student Nurses, Sweet Sugar). Even the Dolls are colour-coordinated, which Corman would perfect to a scientific formula, with just the right balance between blondes, brunettes, redheads and afros. Almost immediately there were imitators. From Dimension Pictures - Corman’s former associates at New World, Charles S. Swartz and his wife Stephanie Rothman - came two faux-Filipino prison films Sweet Sugar (actually filmed in Puerto Rico) and . Jack Hill’s former producer in Switzerland, Erwin C. Dietrich, assigned the ubiquitous Jess Franco to direct a series of ceaselessly vile jungle-bound exploitation pictures, while Corman himself commissioned Joe Dante and Allan Arkush to send up the entire Filipino cycle (as the hilarious film-within-a-film “Machete Maidens of Moratau”) in the New World self-parody Hollywood Boulevard (1976).