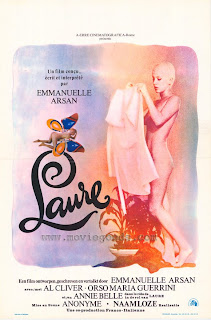 Prior to watching this I had only encountered French sex starlet Annie Belle in House On The Edge Of The Park (1980), a movie which I really hated — her memorably steamy shower scene was the one bright spot in that piece of junk. The petite, short-haired model-turned-actress can be tomboyish and all woman in equal measure, with absolutely no inhibitions about being naked before the camera. She was only 19 when she starred in Laure, yet another erotic travelogue from the guy who wrote the original Emmanuelle novel. (Yes, "guy". More about that later.) It's a meandering, leisurely paced skin flick whose preoccupation with discussing the philosophy of Free Love — rather than showin' it to us — ultimately gets a bit tedious.

Belle plays the title character, a free-spirited, sexually adventurous preacher's daughter living in the . Reverend Dad is a Christian missionary and the director of L.I.P.S., the Lance Institute of Pacific Studies. At the research center's campus her father introduces an anthropology lecture about the mysterious Mara people of a remote Philippine archipelago. The Mara are said to experience a kind of spiritual/psychological rebirth at a certain time of the year, losing all memories of their previous lives during a secretive ritual about which little is known. (Because it's, like, a secret and stuff.) As Pops rambles on, Laure runs the control board for the A/V portion of the lecture... while a giggling female student goes down on her under the table. You see, Laure's that kind of gal. She lives for pleasure and new experiences, taking them whenever and wherever the urge hits her. And she practically never wears panties.

At Laure's prompting, the institute's benefactor — an aging hippie dressed like Jesus — sanctions an expedition to observe and document the Mara. (The idea, he says, "really turns me on.") Leading the trek will be Prof. Morgan (The Big Racket's Orso Maria Guerrini), foremost expert on the Mara culture, accompanied by his assistant/lover Myrte (Thai beauty Marayat Andriane, AKA "Emmanuelle Arsan"); Morgan's sexy blonde wife (also Myrte's lover — they share) can't go along because she's just found out she's pregnant. Representing the institute is Laure, who's the most enthusiastic for the project, and joining her is filmmaker Nicolas (Zombie's Al Cliver), her new boyfriend. These folks theorize about the Mara legends, have a bit of sex, watch each other and other people having sex, and discuss their concept of open relationships (mostly the latter) in preparation for the expedition. There are some odd moments involving a floating house and a wealthy transvestite helicopter pilot (!), but these are no more than episodic padding to pad out a film that's mostly padding to begin with. Laure and Nicolas even exchange wedding vows, with her father officiating, before the group departs. Theirs is a completely open marriage, with Laure free to explore her carnal desires as her husband watches and films the action. Apart from Free Love ("Jealousy is an obscenity"), voyeurism is the prevalent theme of the movie... It's a good thing we have luscious eurobabe Annie Belle to ogle.

An alternate English title for this film was Forever Emmanuelle, even though there is no character in it with that name. It's based on the book by the same author as Emmanuelle, of which the 1974 film version starring Sylvia Kristel was a major international box-office success. (And NOT to be confused with the "Single M" Emanuelle series featuring Laura Gemser.) Laure was to be made in the same style, with novelist Emmanuelle Arsan not only scripting and directing the film but acting (and getting naked) in it as well. Thing is, Arsan (who plays Myrte) didn't actually write the novels — her husband, French diplomat Louis-Jacques Rollet-Andriane, did, using her as a 'beard' for the public. So he ended up doing the writing and helming chores. (Laure was released with direction credited to "Anonymous".) Rollet-Andriane may be a lousy screenwriter but for a novice behind the camera he actually does a decent job. One sequence in the film stands out for attaining a palpable vibe of genuine eroticism... Belle, in a long white dress, slowly enters a pool for a nighttime dip, gradually swimming free of the garment as her naked body undulates in the water, lit from beneath. The breathy song, sung in French, that accompanies Belle's moonlight swim almost sounds as if Ween had done the score for a sex pic. (The majority of the "easy listening" soundtrack is laid back to the point of stupefaction.)