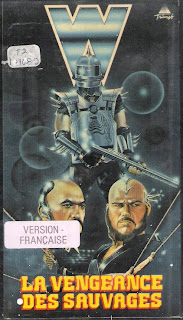 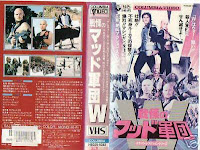 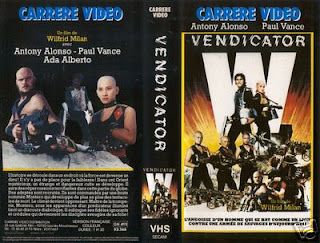 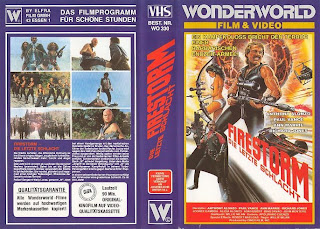 Outlandish Filipino actioner. A gang of bald-headed, chopper-riding drug peddlers (even the female members are bald!) roll into town and get into a fight with police sergeant W2 (Anthony Alonzo). He ends up shooting one of the gang members and his boss, Major Medina (Joonee Gamboa), suspends W2 from the force. The gang members steal their comrade's dead body from the morgue and bring him back to their leader, Nesfero (Johnny Montero), who declares war on W2 because the dead gang member happened to be his brother. The gang attack W2 and some police buddies (they all have single letter names followed by a number) at a restaurant using machine guns, but W2 and his buddies escape. Things really go south for W2 on his honeymoon, where Nesfero and his men castrate W2 and rape his wife (Ann Marrie). When W2 wakes up in the hospital, discovers that his package is a little light and realizes that he will no longer be able to satisfy his wife, he vows revenge (Later on, he watches his naked wife masturbate in the shower and totally loses it. He screams to his wife, "I'm useless! I'm a eunich!"). Nesfero is expecting a huge shipment of opium and the Syndicate is worried that he is fixating too much on W2, so Nesfero kidnaps W2 and tortures him (he's strung-up and hung horizontally by ropes between four posts). He is rescued by female gang member Pratings (Ada Hubert), who tells W2 that Nosfero raped her and that he's the Devil ("He's gone mad!"). Major Medina assigns Lieutenant V1 (Bing Davao) to find the missing W2. So what's the first thing V1 does? Why he goes swimming in flesh-colored Speedos with W2's horny wife and then makes love to her! W2 returns home and catches them in the act (She says haltingly, "I really don't know what came...over us!") and throws his wife out of the house. Pratings tells W2 about Nesfero's upcoming opium shipment, so W2, Pratings and some buddies intercept and steal the shipment, which puts Nesfero in hot water with Syndicate boss Praxis (Paul Vance). What Nesfero does next is truly brain-busting. He and his men take an entire Catholic nursery school hostage and threaten to kill all the children unless the opium shipment is returned and W2 is delivered to them! Police reporter Alice (Alicia Alonzo, Anthony's real-life sister) gets involved in the case when she finds out her daughter is one of the hostage children, but her stupidity gets her daughter killed. W2 comes out of hiding (after he creates an armor-plated car, body armor and a hand-held rocket launcher) and faces Nosfero and his gang in the explosive finale. 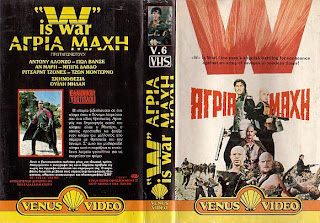 This crazy Philippines-lensed action flick, directed and scripted by Willie Milan (ULTIMAX FORCE - 1986), is one wild ride. The plot makes absolutely no sense and looks like it was edited with a chainsaw (some violence and nudity seems to have been cut out in this version, especially noticable in the shower masturbation scene), but this film is so perverse and out-there (A castrated man as an action hero? Who would have thought?), you'll wonder what alternate universe this film was made on. Filled with hilarious dialogue (When one of the cops asks Major Medina where they should look for the missing W2, he snaps back, "Search in Hell if you must!" or W2's rant to Major Medina when he won't lift his suspension: "I put my ass on the line while you sit back and polish your medals!" That line of dialogue is repeated at least three time while Major Medina has a crisis of conscience in his office!), and mindless violence, including explosions, multiple gunfights, child killing and W2's assault on Nesfero's beach compound in the finale, where both he and Pratings don handmade steel helmets, which make them both look like the Rocketeer! Hey, this isn't rocket science, but W (also known as W IS WAR) is a mindless, fun action romp the Filipinos excelled at making. Director Willie Milan made a sort-of sequel in 1985 called CLASH OF THE WARLORDS. Besides a couple of the same actors appearing in similar roles, it really has nothing much in common with this film (For one, the sequel is a post-nuke film and this one isn't). Also starring Richard Jones as Nosfero's henchman Pentagon, who thinks he can outfight a machine gun. He can't. Not to be confused with the 1974 thriller starring Twiggy, which shares the same single-lettered name.
Posted by Unknown at 9:46 PM