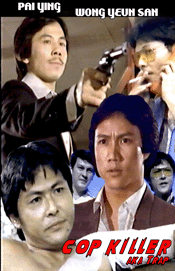 Ho Chung (Pai Ying) is a hot tempered HK Police Officer whose attention is drawn to an arms smuggling ring after the death of one of his colleages by a crook called Turkey (a fine performance by Lau Hok Nin).

To Chung's disappointment, the case is passed over to another department led by the more level-headed Superintendent Kwok Keung (Wong Yuen San), a good friend of Ho Chung's and who plays things strictly by the book.

Frustrated by the situation, Chung assaults Mr. Ma (Kenneth Tsang), the alleged head of the illegal arms operation, which leads to an argument with his Chief and his eventual resignation.

As the story continues, Kwok Keung is still unable to find any concrete evidence to convict Ma and Chung begins to increase the intensity of his personal vendetta against the crooks which yields some tragic results. Further complications arise when Ho Chung's sister goes undercover and seduces Ma in an attempt to extract vital information out of him for the police.

'Cop Killer' is a fast moving action thriller which benefits greatly from it's tight pacing and an intense central performance from Pai Ying. The main bulk of the film is taken up by Chung taking on the gang single handedly with his fists, bats and guns, followed by increasingly violent counter attacks towards Chung's family from the bad guys. This builds nicely to what should have been a killer, 3-way showdown but instead, we get a prolonged and slightly unsatisfying resolution to the tale which seemed more like a tacked on afterthought and takes most of the punch out of the films climax. (For those that have seen this film, I'm assuming the inclusion of the "courtroom" scene was included to avoid any possible censorship issues in Hong Kong?).

However, despite this flaw, (which is only a personal opinion - some may find the ending quite plausible?) 'Cop Killer' was a highly entertaining film. The story was tense, with the action being tough, brutal and at times, quite sadistic (e.g. a woman being gang raped in front of her handicapped son) so I would only really recommend this film to fellow de-sensitised souls out there! Still...fans of the grittier New Wave crime flicks that were to emerge a few years later are also strongly urged to check this one out.

“Trap” gives bad movies a bad name. Compared with “Trap” the shot-on-video Philippine action movies with Oshima Yukari as Cynthia Luster are a cross between “Battleship Potemkin”, “Rules of the Game” and “Citizen Kane”. “Trap” is amateurish—literally, I think since several of the actors didn’t know what to do when in front of the camera. Even if one were to ignore all the post-production maladies that afflict it—badly cropped, insanely dubbed, obvious color changes from reel to reel—and give it a pass for the zero budget sets and ham-handed editing it is still one of the worst movies you will ever see. So I suggest you don’t see it.

If you do you will notice some of the difficulties right away. The first scene after the opening credits shows two police officers and two criminals sitting in a restaurant and arguing. The police officers are trying to convince one of the criminals to testify against Ma, a crime lord. It is clear that the actors don’t know what to do after delivering their lines and that the director either neglected to or wasn’t able to give them a cadence for the lines—there was a noticeable pause—nothing purposeful, just a blank spot—after each line and the actor who said the line had nothing to do while waiting for the next piece of dialog. This scene was ended, none too soon, by two gunmen arriving to kill the four men at the table to the relief of at least one viewer—me. The same type of thing happens during action scenes—it is obvious in several instances that person being hit has to wait for the blow to fall—part of this is bad editing, part bad action direction.

There is a hint of a plot that shows up more than halfway through the movie. A police cadet is sent undercover against a murderous crime lord—the operation is set in motion when she is publicly dismissed from the academy. She is the daughter of RHKP Sergeant Ho, who has actually quit in disgrace after beating up the crime lord and his lawyer while serving a search warrant. The plot doesn’t really thicken—it congeals.