[A Filipino-Hong Kong co-production filmed partly or entirely in the Philippines, and released in the US on a double bill with producer Jimmy L. Pascual’s Devil Woman (1974). Also released as “Kung Fu 10th Dan”, “Kung Fu Of 10th Dan”, “King Of Kung Fu” and “The Wander Man”] 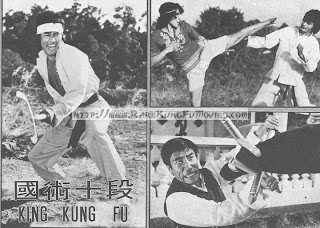 "From the day we started, you've beaten seven schools, five gang leaders and nine bastards...and those you defeated didn't know why you fought with them. It seems your purpose in life is one continuous fight."

Li Tin Ming and his side kick, Hsiao San travel the countryside going from one martial arts school to the next challenging and defeating teacher and student alike to test his kung fu. The duo soon find themselves in Hung An Town where a thug called 'The Leopard' rules over the people. Killing him, Li carries on his excursion to fight against all boxers. Along the way, he learns a lot about humility and the consequences of his actions. Giving up fighting forever, a new gang sets up camp in Hung An Town and Li Tin Ming is forced into a duel against Kang Lung, the revenge seeking father of 'The Leopard'. Now he must face his most dangerous adversary and free the oppressed town once more.

Chen Chi Hwa (as Charlie Chen) directs this sometimes thoughtful, but occasionally off the wall basher flick. As obscure and rare as they come (in its widescreen format as presented here), DRAGONS NEVER DIE (1974) is definitely going to please fist and kick fans. However, considering the year in which it was made, it has an unusually high amount of comedic moments that didn't really take hold of the kung fu genre until 1978. The humorous bits are all courtesy of Hon Kwok Choi and by the time the film is half over, the funny stuff has halted leaving only brutal altercations.

There's a lot of overt sexual references in this movie, at least during the first 30 minutes. This is especially pronounced while the two men work in a blacksmith shop. It's handled in a rather bizarre fashion. A woman happens by and watches Li sweating profusely as he works licking her lips in desire for his body. We see shots of him pounding away on the metal as she looks on and the camera zooms in on the raging fire. Then, Hsiao San, himself, gets aroused once he gets a peek at the lady's chest after she opens up her shirt. He begins thrusting the flue faster and faster until Li manages to get his attention and calm him down.

This all adds up to nothing except to pad out the running time and comes off as an attempt by the director to be creative albeit in a sleazy way. There's even a bath scene wherein Miss Wong, touching herself, expects Li to enter and enjoy a sexual encounter with her. What she gets is a visit by his sidekick. Hsiao San gets a rise in his pants once more and tries to get a gander of Miss Wong's groceries whilst she bathes. The actress playing Miss Wong, Eva Linda, is rather endowed and possesses a nice figure.

Since establishing Hsiao San as a perpetually horny fellow, he is also shown to be a dreamer as well. Imagining himself the "Kung Fu 11th Dan", he sees himself as a top class fighter, at least in his minds eye. As played by Hon Kwok Choi, he overplays the typical good guy lackey that later became commonplace in hundreds of indy productions. He exaggerates it to the point that it quickly becomes annoying. But that is most often the case in these cheaper pictures. In addition to all the peculiar comedy and dream sequences, the director employs some Chang Cheh style flashbacks represented by color filters. There are also some brief moments that entertain some oddball camera movements utilizing different lenses lending a distorted effect to the image.

Alex Lung did relatively few movies, but he definitely has presence and displays some power in his movements. I'd be interested to know just what happened to him shortly after he dropped off the movie map in 1974. This was one of his last roles before his disappearance from the film world. He tackles his character with little to no change in emotional expression. Yet, as you learn more about his character, his singular expression suits him just fine. There are also some story comparisons between this film and the 1953 American western, SHANE.

In that film, Shane, the gunfighter, attempts to start a new life leaving the way of the gun behind, but outside forces prevent that from happening. In DRAGONS NEVER DIE, Li pursues a life of constant fighting testing out his 'Kung Fu 10th Dan' until one day, after a couple life altering incidents, Li wants to hang up his fists and feet forever. But, as in SHANE, outside forces keep him from doing so. This is where the story finally becomes interesting and belies what must have been an extremely low budget production. There are also some topics discussed that mirror similar themes in SHANE, such as the nature of violence and killing.

Li Tin Ming is brought back to Hung An Town by a young girl named Shi Lan so that her father can thank him for ridding their town of the wily 'Leopard'. Over dinner, Mr. Tao has a conversation with Li asking him why he enjoys fighting so much. He replies, "I want to fight all boxers." Shocked, Mr. Tao responds, "To defeat others is not kung fu...it's violence." This doesn't stop Li from participating in a martial arts tournament. Being a late entry, he is forced to fight several consecutive battles. Injuring a man severely, Li see the mans son crying with a look of anger on his face. This pricks something in his conscience from when he was a little boy.

The next day, he fights yet again. Beating the man, the defeated, but respected fighter states he doesn't recognize Li's Kung Fu of 10th Dan. At this point, Li Tin Ming soon begins to dislike his wandering journey battling various martial arts experts to test his skills.

He vows to give up fighting and leaves Hung An Town. Some time passes and he's lured back by Shi Lan. She says that not long after he slew 'The Leopard', another more ferocious gang took over the town. It is later discovered during the concluding fight scene that this new gang is led by the father of 'The Leopard'. Much of the underlying meanings in some of the more meaningful passages are eventually lost amongst the numerous kung fu fights. At times, the film seems to have been directed by at least three different people.

Corey Yuen and Brandy Yuen handle the choreography and it's as good as any basher fight designs of the time. Faster and more brutal than some others, it's all grounded action with little fantasy moments as seen in countless swordplay movies. Even the kung fu films would eventually feature lots of high leaps and jumps among the lack of reality based fights. DRAGONS NEVER DIE avoids a lot of that overly stylized choreography.

And like all other bashers of the time since the release of THE CHINESE BOXER (1969) (and, most famously in America, KING BOXER 1972), all these basher films featured Japanese villains and Chen Chi Hwa's movie is no different. Yukio Someno (BOXER REBELLION) plays the Nipponese bad guy, but he's not the main villain as it's revealed at the end.

That role is reserved for Hong Ying Kit (Han Yang Chieh). Appearing in a plethora of swordplay movies spanning over two decades, he appeared and choreographed various martial arts pictures for Shaw Brothers and Golden Harvest and various other smaller outfits. He also did some kung fu movies such as the one reviewed here as well as some modern day style action films like ANGEL WITH THE IRON FISTS and its sequel ANGEL STRIKES AGAIN (both 1966). Some of his swordplay pictures are KILLER DARTS (1968), DRAGON SWAMP (1969), the King Hu classic, A TOUCH OF ZEN (1971), BROKEN OATH (1977) and THE JADE HAIRPIN ALLIANCE (1980).

There's also early appearances by two future Shaw Brothers stuntmen/actors, Yuen Wah and Yuen Bun. Yuen Wah was noted as performing the more acrobatic stunts in Bruce Lee's movies such as ENTER THE DRAGON (1973). Yuen would later work in dozens of Shaw Brothers productions most predominantly in Wuxia productions directed by Chu Yuan. Occasionally Yuen Wah would partake in action choreography and got a rare co-starring role as a hero in the Kuei Chi Hung curio, COWARD BASTARD (1980).

When Shaws shut down, Yuen made the transition to Golden Harvest where he essayed one of his most memorable roles as the cigar smoking, lithe and wiry bad guy in Sammo Hung's phenomenal EASTERN CONDORS (1986). Wah's career got a renewed popularity when he featured in the 2004 box office sensation, KUNG FU HUSTLE.

Yuen Bun (like Yuen Wah) plays a fighter whom is beaten senseless by Alex Lung in DRAGONS NEVER DIE (1974). Yuen played a lot of bad guy roles in Shaw Brothers pictures like AVENGING EAGLE (1978) in which he played one of the 13 Eagles. He can be seen as the first wave of bad guys that accost Ti Lung during the opening. Yuen Bun also featured as villains in THE DEADLY BREAKING SWORD and TO KILL A MASTERMIND (both 1979). From the mid 80's up to now, Bun has been enjoying performing action design with an occasional onscreen part here and there.

Aside from a good story and good fights, some incredibly bizarre moments threaten to derail the whole thing. Luckily, the good elements outweigh the bad in this flawed, yet enjoyable kung fu movie. It no doubt will be of interest to martial arts fans as, before now, was a rare title to obtain in its original widescreen format.