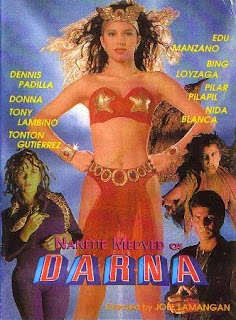 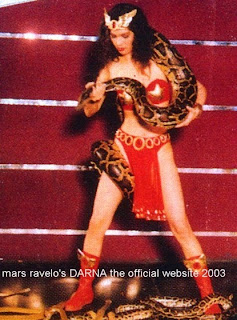 After 10 years of hibernation Darna is back ! This time vivacious Nanette Medved carried the Darna mantle.

Darna hit the second spot at the box office in the 1991 Metro Manila Film festival.

The Darna icon soldiered on as esteemed director like Joel Lamangan tried their hand at the comic book legend. The results were mixed though. Lamangan used Nanette Medved in Viva Films’ Darna (1991), but it was Valentina again who stole the thunder, thanks to Pilar Pilapil’s comic performance.

Darna was Nanette's first solo picture. In this new campy updated version of Darna our super heroine had a little costume change, her head dress was replaced by a tiara - which I don’t really like! But of course, that is just my personal opinion. Viva's version of Darna is not really my cup of tea. Don't get me wrong, I just thought they can do better.

18 years of beauty rest Darna's number one arch enemy Valentina also made her comeback. The man eater Valentina was humorously played by one of the finest actresses of Philippine cinema Pilar Pilapil.

Another comeback queen is Babaing Impakta essayed by Bing Loyzaga. The flying vampire was also played by the veteran actress Gloria Romero in Lipad, Darna, Lipad.

Dominico Lipolico, a new villain was introduced in this movie played by Edu Manzano. 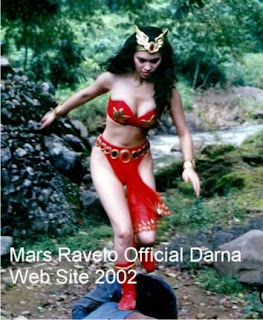 The movie started somewhere in . A group of treasure hunters lead by Domico found a cave full of treasures of golds and precious gem stones. Not wanting to share the good fortune, the greedy Dominico killed his men. Soon after, a voice of the devil that sounds like Ben David echoed in the cave. He told Dominico that he found the most powerful possesion of the darkness, a powerful necklace that will give him super powers, eternal youth, fame and fortune. In exchange of this, Dominico must spread demonism in South East Asia, starting in the .

As the story continues, a young Narda and Dong yes, a new brother of Narda, was introduced in the movie. She now have two brothers Ding and Dong. Don't their names sound like a door bell? I don't get why would they have to introduce a new brother? The character of Dong is really not that important in the story and did not make such a difference in the movie. 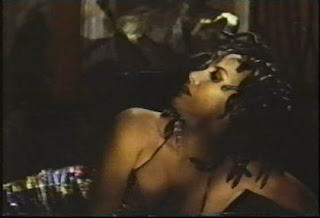 In the meantime, Dominico teamed up with Valentina and Babaing Impakta to spread evil. Of course, Darna after getting caught by her villains and almost turned her into one of them did her best to stop Dominico and his allies. I really enjoyed Pilar Pilapil comedic performance of Valentina and her snake puppet side kick Vibora voiced over by Ruby Rodriguez. It was really hilariously funny, at least to me. This come back movie of Darna doesn't have much to offer, some scenes are re-created from Lipad, Darna, Lipad. I also noticed Nanette keeps on posing with her hands on her hips you know, that typical superhero pose. It seems like she is always ready to have her picture taken. The people behind this movie should have given Nanette some time to have more training for her fight scenes to make her portrayal of Darna more believable. And also, what was the deal with her deflecting bullets with her bracelets? It reminds me of my other favorite super heroine who flies an invisible jet. To top it all I am so annoyed by that over acting police man.

The special effects were not that good either to think that it was made in the 90's. In fairness to Joel Lamangan, he is one of the finest local directors in the Philippine cinema can offer. Maybe because Darna was Joel first major movie to handle and fantasy adventure is not his area.