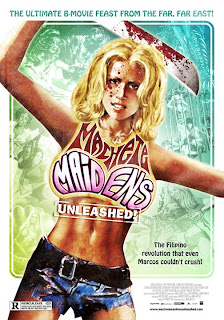 The first round of reviews are in!

I don't usually give out such high ratings but Mark Hartley's new doco about the Filipino exploitation films of the 70's and 80's by way of Corman's New World Pictures is wonderful.

The interviews with former directors and stars are many and all entertaining. The clips and trailers shown are even better.

Any fan of B movies will love this.

I hope that this gets some sort of cinema release as Hartley and Co have clearly put much work and passion into this. His last doco NOT QUITE was criminally ignored in this country.

After seeing the wretched INCEPTION (with a ridiculous budget of $150 Million) earlier in the evening, MACHETE MAIDENS UNLEASHED was a fine celebration of purely entertaining cinema made on low budgets.

More please Mr Hartley. How about Italian exploitation flicks of the 70's and 80's next? I wish cinema could be this fun again.

Review from the Stale Popcorn blog:

Have you heard of these movies? The Big Bird House? The Hot Box? Cleopatra Wong? How about Ebony, Ivory & Jade, Cover Girl Models, Night of the Cobra Woman, Beyond Atlantis, Dynamite Johnson, TNT Jackson, Savage! or Black Mama, White Mama? If not then you are in for a treat with Machete Maidens Unleashed!, an unofficial sequel to Mark Hartley's brilliant 2008 documentary Not Quite Hollywood that charted the history of Aussie genre films of the 1970s and '80s. All of those titles listed above, and others like The One-Armed Executioner and the Beast of Blood franchise, spawned out of the Filipino film industry with the help of American filmmakers like Roger Corman and now rank as near unknown and forgotten cult niche titles for the amusement of stoned college students.

The same crew that worked on Not Quite Hollywood - the opening night film of MIFF 2008 and my #6 film of that year - have again been assembled to craft this ode to Filipino action movies. Snappily edited, Machete Maidens Unleashed! is simply 85 minutes of clips from movies about nubile young actress firing rifles, karate chopping and waving machetes around in between bouts of baring their breasts while mud wrestling in jungle prisons and causing political uprisings through the backwater swamps of he .

Interspersed throughout all of this pan and scan insanity (most of the films have never been remastered for DVD release) are interviews with well-known directors like John Landis, Brian Trenchard-Smith and Joe Dante as well as notable behind the scenes figures like George Corman, Eddie Romero, Jack Hill and an assortment of actors that made a presence for themselves in this sub-genre of film. Names like Gloria Hendry, Margaret Markov, Colleen Camp, Judy Brown and Marlene Clark may not be familiar names, but they should be after you've heard their fascinating anecdotes about working in the jungles of the . Higher profile names like R Lee Ermy, Sid Haig and Chris Mitchum are also there for their own hilarious stories, but unfortunately Pam Grier, surely the biggest name to arise out of the Filipino genre films - she made The Big Doll House, Women in Cages, Twilight People, The Big Bird Cage and Black Mama, White Mama before blaxploitation hits Coffy and Foxy Brown made her a star - refused to be interviewed. While everyone seems at least partially ashamed of their contributions to cinema here, they are all open and admit to being willing participants. It's a shame that Grier didn't see it the same way.

"Rated R for Ridiculous", as the poster says, sums up Mark Hartley's second documentary feature perfectly. I haven't even got into titles such as For Y'ur Height Only that starred Filipino dwarf superstar Weng Weng as a James Bond spoof or Up from the Depths, which was made to cash in on the success of Piranha one year earlier. If movies such as Machete Maidens Unleashed! achieve anything substantial then it's making someone like me really want to seek out movies like Cleopatra Wong (nuns with assault rifles) and Dynamite Johnson (some undecipherable plot that involves a robotic dragon). Hopefully these titles get some sort of DVD release after this movie gets seen by the right people like many of the Ozploitation films did after Not Quite Hollywood.

Sadly, Machete Maidens doesn't achieve the levels of success that director Hartley had with Not Quite Hollywood. Whereas that film spanned various genres from sex comedies to horror and science fiction, this one is far more limited to the films it covers. It is easy to mistake many of the movie clips featured within as being all from the one movie about a group of sexy and sassy American women being held captive in a prison deep within the jungle wherein they must use their sexual force to break out of. There's also a distinct lack of passion compared to its predecessor. Perhaps its the fact that these films are even more obscure than Patrick or Dead-End Drive In of the so-called "Ozploitation" movement, but there's no effort made to show how the effects of these Filipino genre films are still being felt today. Perhaps the Filipino film industry is as closed tight as Imelda Marcos' box of secrets and umbrellas, but Machete Maidens Unleashed doesn't have quite the same insight. Nevertheless, it is still a wild and hilariously entertaining hour and a half of absurd insanity. B

Review from The Age:

THE indefatigable Mark hartley turned ‘‘Ozploitation’’ into a buzzword with his recent cinephilic documentary Not Quite Hollywood. This follow-up focuses on ‘‘exploitation’’ in a more literal sense: in the 1970s, the famously costconscious producer Roger Corman led the charge towards the Philippines as a cheap location for action and horror B-movies, with dictator Ferdinand Marcos more than willing to lend on-the-ground support. Politically speaking, the film raises more questions than it answers, celebrating the gung-ho spirit of the era even as it draws attention to the real horrors offscreen. Nevertheless, Hartley has few rivals when it comes to revving up interview subjects and matching their snappy one-liners with appropriately lurid clips. The expert commentators include MIFF guest Joe Dante, who spent his youth editing trailers for Corman and has plenty of droll memories to share.

Saw it last night at MIFF, with Q&A from Hartley and producer Veronica Fury (great name) afterward. It's not as comprehensive as NQH, and many of the clips are of truly dire quality (due to shockingly bad archiving practices of the Filipino studios), but it is fascinating and funny. It's more about the productions - mainly Corman/AIP jobs - that were shot there in the seventies than the Filipino industry itself (with a digression into Apocalypse Now). Plenty of actors, producers and directors are interviewed, and the films themselves look just jaw dropping in all respects. The only ones I'd actually seen were Apocalypse Now and Black Mama, White Mama, but I simply must get around to seeing Eddie Romero's films, along with Bobby A. Suarez's They Call Her Cleopatra Wong and Bionic Boy. Sadly Suarez (who was notorious for getting about on set with a loaded and cocked .45 in his belt!) died a few days before Hartley got to interview him.

There are some choice comments from Joe Dante and Allan Arkush on how they would edit the trailers for Corman's Filipino productions that are utterly hilarious. John Landis also makes some great contributions.

According to the Q&A, this will be airing on the ABC down the track, but I also imagine a theatrical run can't be too far off.

Tim Chuma's review from his blog:

Tagline: Was good to finally see it, but...

This is hard, I know Andrew has been working on his Weng Weng doco for at least as long as Mark Hartley worked on Not Quite Hollywood to get it up and it was great that it finally produced some work at the end of it.

It is what it is and although I would have liked to see more from the crews who worked in the Philippines (there were some great stories from what I have read about the Weng Weng doco), I am sure a lot of people will like it when it gets a wider screening, which it will do at the Fantastic Fest in Austin later this year and several other festivals.

The films featured in this documentary are a lot more niche and although Roger Corman's movies are featured, the focus was more on some of the obscure ones. I was surprised by some of the movies as I hadn't heard of Bionic Boy before and not many other ones outside the Weng Weng ones (there are six of them), the women in prison series and a few others.

As explained in the Q&A it was decided to focus on movies produced for the overseas market and not movies made for the Philippines as there are no copies of them in existence, which would have made it a lot harder to do the documentary. Some of the footage is a bit rough due to it having to be sourced from tape and the original trailers for the movies.

Due to budgetary and time constraints (it was made in just six months) the period covered is from the late 60s to early 80s and they did have to miss out some of the later films. I was a bit puzzled by the Apocalypse Now coverage, but I guess it was such a large production for the country they had to include it..

There were some interesting questions from the Q&A such as who wouldn't be interviewed for the documentary which was Pam Grier and Jeannie Bell. Unfortunately a couple of the directors from had died before the filming and one only very recently but it was good to see some earlier interviews with them in the film.

I also enjoyed hearing about how the documentary first came to be including Andrew Leavold's involvement and Mark Hartley's response to Veronica Fury's question on making another doco originally. Also the mention of Veronica researching a doco on the history of Australian pornography was interesting.

Was a bit of a curly question about the female leads in the women in prison films seeming very well adjusted despite some of their experiences making the movies. As it was explained most of them didn't really go on to film careers and have led normal lives since the 1970s. They also new what the filming was going to entail originally and were prepared for it.

There is one more screening of the documentary at the festival on a double bill with For Y'ur Height Only and I am sure it will get a lot of people in. I am still going to buy the DVD as I want to see what they put on it for the 'Search for Weng Weng' special feature. Rating: 7/10

So I caught Mark Hartley's follow-up to NOT QUITE HOLLYWOOD the other night - it's called MACHETE MAIDENS UNLEASHED, and it looks at the thriving exploitation-movie industry in the Philippines throughout the '60s, '70s and '80s. Some of the movies were done by Filipino filmmakers (like Cirio H. Santiago) but a large percentage of the movie is dedicated to the women-in-prison pictures made by Roger Corman's New World Pictures. It's interesting and fun, and very much a companion piece to NQH - little nuggets of real-world history combined with behind-the-scenes anecdotes, colourful commentary (the very funny John Landis in for Tarantino) and many, many scenes featuring the unclad stars of the movies.

Oh, and Weng Weng, the inch-high private eye of FOR Y'UR HEIGHT ONLY. Once seen, never forgotten.

For Melbourne Chewers, it's screening at the upcoming Melbourne International Film Festival. Elsewhere in the world...well, you'll get it when you get it, I guess. But it's well worth a watch.