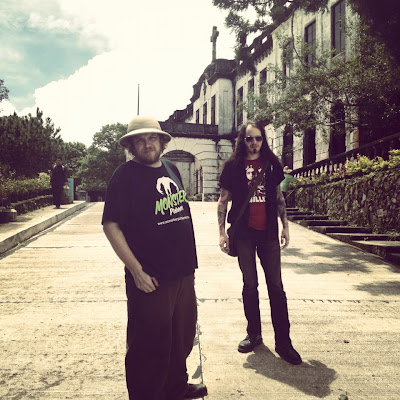 100 REASONS WHY I LOVE THE PHILIPPINES #1: Howdy Pilgrims! Daniel Palisa and I outside the ruins of the Diplomat Hotel in mountainous Baguio, scene of the ultimate nuns-with-machine-guns battle in They Call Her Cleopatra Wong (1978). It was originally a Dominican monastery in the 1800s before it was a hotel, then taken over by a Faith movement, and has been in ruins for over 20 years. And there it was, after a 20 minute drive uphill: the convent from Cleopatra Wong. Scanning the mouldering rooftops, my head was filled with visions of Bobby's moustache-clad nuns falling to their deaths in slow motion. I'm sure, somewhere amidst the slime-covered fountains and bombed-out rooms there's a metaphor for the Philippines film industry somewhere... 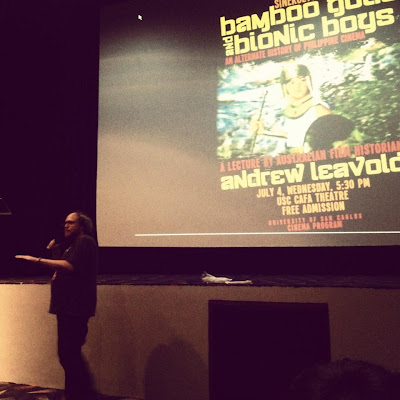 100 REASONS WHY I LOVE THE PHILIPPINES #2: Cebu. Man I love that place. We stayed at a fantastic backpackers called Kukuk's Nest (actually more like an artist's retreat) for two days with our incredible host Maria Victoria Beltran and her zombie-filmmaker progeny Ivan Zaldarriaga, ate and drank like kings, dropped anchor off an island and lazed in pith helmet on the crystal-clear sea, tore through the Church of Santo Nino, and managed to squeeze in a "Bamboo Gods" talk at the University of San Carlos courtesy of the VERY generous and welcoming head of cinema studies Misha Anissimov. Here's what remained of the USC film geeks...thank you Cebu!!! 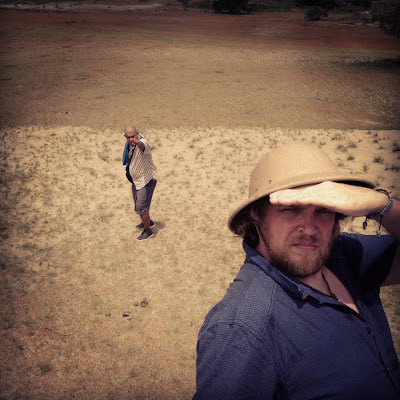 100 REASONS WHY I LOVE THE PHILIPPINES #3: The desert in Ilocos Norte. The north-west part of Luzon island, twelve hours drive from Manila, is the last place you'd expect sand dunes, and that's what makes the Philippines' terrain so adaptable for movies. Cirio Santiago shot most of his post-apocalypse films nearby, and here at Fort Ilocandia - looking a little greener than usual thanks to the recent typhoon - Jim Gaines Jr shows me where Teddy Chiu shot him and Cynthia Khan in the futuristic kickboxing "epic" ETERNAL FIST/FIST OF STEEL (1992). This shot was taken just one minute before we received the phone call: "Madame Imelda is waiting for you..." 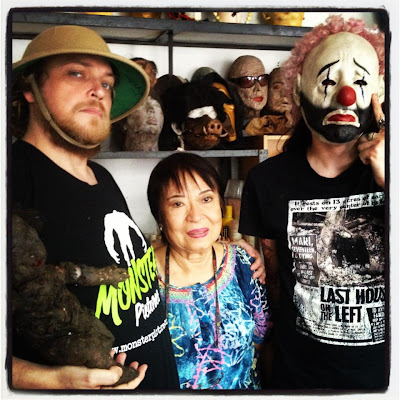 100 REASONS WHY I LOVE THE PHILIPPINES #4: Cecille Baun, the Godmother of Gore and Queen of Special Effects. This humble and generous lady, pictured in her workshop with me and Daniel Palisa and one of her many burnt rubber babies, revolutionized the way effects were created for the local film industry way back in the early Seventies, then went on to such diverse projects as Apocalypse Now, Platoon, Hamburger Hill (for which she was nominated for an Academy Award), Shake Rattle And Roll, the Darna series, Raw Force, and John Sayle's recent Amigo. Needless to say, Dani and I completely ran amok in her toystore!! 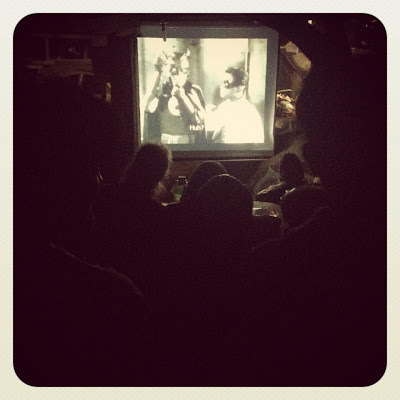 100 REASONS WHY I LOVE THE PHILIPPINES #5: Dolphy. The Pinoy King of Comedy passed away July 10th after seven decades in show business; here's a photo of a screening of his parody film James Batman (1966) - in which Dolphy plays James Bond AND Batman, and often in the same shot! - we did two days later in an artists' space in Baguio. I had the honour of meeting and interviewing Dolphy back in 2007, and having watching around fifty of his films I understood the enormous outpouring of emotion at his passing; as if an precious part of the Philippines' collective consciousness has departed this world forever. Screening James Batman that night was a raw, bittersweet experience, but made that much richer by sharing it with the crazed rice wine-swilling, bongo-bopping Baguio crowd (thanks Uber Alles!). RIP Dolphy. 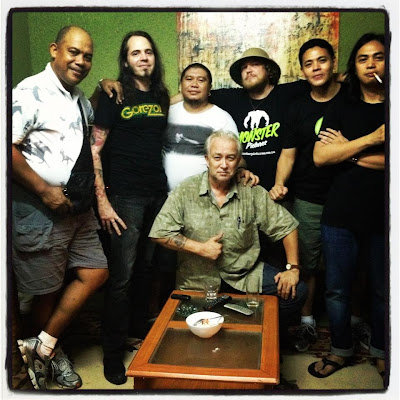 100 REASONS WHY I LOVE THE PHILIPPINES #6: House parties at Richard Somes'. We bring a shopping bag full of Tanduay rum and mixer, Richard cooks up half a caribou, the horror directors come on over with the old Goons, and twelve hour later... Somes (in white t-shirt) is one of the most interesting genre directors currently working in the Philippines, his latest aswang film Corazon making a killing at the local box office; Maria Rico Ilarde (second from right) is also a veteran horror guy, currently completing a Regal film about a killer fridge (!!), while Ato Bautista (right) is the more avant-garde of the three - see his genre-bending Carnivore and The Night Infinite. Daniel Palisa and I are flanked by veteran B actors - and Apocalypse Now extras! - Jim Gaines Jr (left) and Don Gordon Bell (front). Mabuhay! 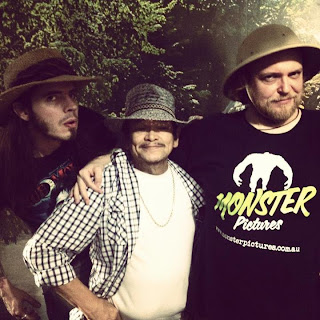 100 REASONS WHY I LOVE THE PHILIPPINES #6: Wallpaper. Specifically, the wallpaper in the home of Celso Ad Castillo, one the of the greatest ever filmmakers the Philippines has ever produced - Burlesk Queen (1977) with Vilma Santos, the horror classics Kill Barbara With Panic (1974) and Maligno (1978), iconic adult films Isla (1984) with Maria Isabel Lopez and the Soft Drink Beauties' Snake Sisters (1984), and that's just a hint at an extraordinary career. Daniel Palisa and I did the pilgrimage to his family house in Laguna, just over three hours drive from Manila, and for the next six hours drank rum and brandy, and talked about movies and laughed and plotted a collaboration. Keep watching this space... 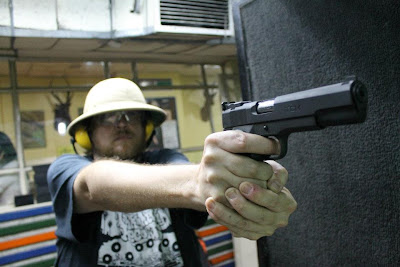 100 REASONS WHY I LOVE THE PHILIPPINES #7: Guns. It's a gun-happy culture. Even the signs at the Manila Zoo say "Please leave your handguns at the counter". So OF COURSE you're going to find a shooting range in the sub-basement of the Makati Square trip mall. There were .45s, 9mms, a .22 (pictured) that pierced armour and went off like a landmine, and a pump action shotgun that screamed "F*ck you!!!" every time you discharged an empty shell. And yes, I am still vegan. 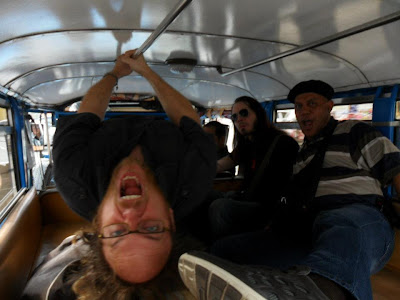 100 REASONS WHY I LOVE THE PHILIPPINES #8: Jeepneys. Those garishly-decorated reconditioned troop carriers that clog up roads and cost less than twenty cents a trip. Cel was our driver from Laoag Airport and he agreed to be our driver for the two days in Ilocos Norte; in return he received twice his regular wage plus he came to Imelda Marcos' birthday party with us. Believe me, there's nothing classier than turning up to the Marcos mansion in a jeepney!

100 REASONS WHY I LOVE THE PHILIPPINES #9: The Kids. These are the remains of UP Diliman's ISA (Interdependent Student-Centred Activism) organization after a three hour lecture and DVD compilation of Pinoy B films, one of four campus talks I did last visit. Watching the kids lose their minds over the collected works of Weng Weng, Bobby A. Suarez and Cirio H. Santiago is a subversive joy unto itself and makes for a loose, fun, carnival-like atmosphere inside those hallowed halls of learning. Thank you Marko Yambao for inviting me, and hope to see you guys soon! 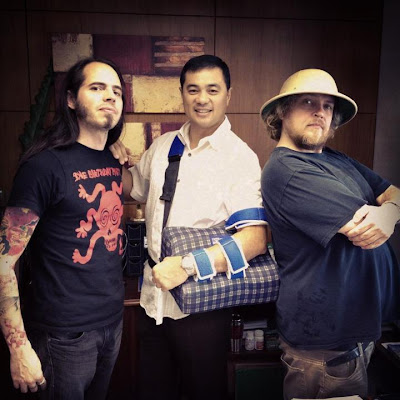 100 REASONS WHY I LOVE THE PHILIPPINES #10: Contrabidas, or screen villains. If you were making an action film in the Philippines, you too would cast veteran actor with 25 years of films under his black belt and gold medalist in Tae Kwon Do Monsour del Rosario, pictured here in his Makati City Hall office with me and Daniel Palisa, as your contrabida. Picture this: we've just handed him our script, we get the thumbs-up, and to seal the deal we head down to the police shooting range in City Hall's basement to blast away on his custom-made 45. Even by non-Tae Kwon Do standards, pure Gold.
Posted by Unknown at 12:23 PM