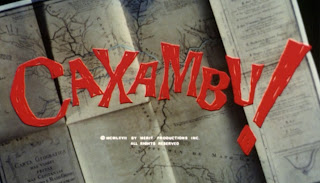 [American production shot in the Philippines, perhaps a TV movie for Paramount Television] 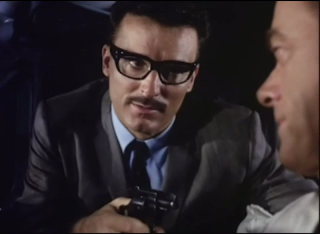 My summary is hardly a glowing endorsement, but you could certainly do a lot worse than watching "Caxambu!". While the story is a bit familiar and the budget apparently rather low, it worked well enough that after it was over, I was glad I'd seen it--even with its shortcomings.

John Ireland plays the leader of a gang who steal a bag of diamonds in South America. They take a diamond cutter and his wife hostage and steal a plane in order to escape. However, the plane crashes and the group is stranded in the middle of a VERY hostile wilderness. The main problem are the local natives--who pick off several in the group, one-by-one. The other problem is greed, and the thieves soon start bickering with each other.

I've seen several films and TV shows that remind me of "Caxambu!" but despite being familiar and having some difficult to believe characters (particularly Ireland and his unbelievable change of heart), it kept me engaged throughout and was a decent little film. The location shoot didn't hurt. 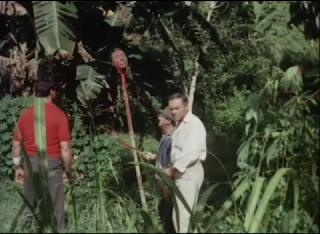 After their plane is hijacked, a small group of people find themselves wandering in the jungles of Caxambu, where they're stalked by the natives, subjected to local dangers, and paranoia causes them to turn on each other.

It's hardly surprising nobody else has commented on "Caxambu!" -- I can't find any evidence that it ever played theatres or drive-ins before it began airing on TV infrequently throughout the '70s and '80s. It feels like one of those bad public domain b-movies from the era that Elvira and the gang from MST3K would mock.

I don't mind a slow-moving film, but this one is paced at the speed of evolution. It takes a good 40 minutes of the movie's 75 minute running time before much of anything happens. And when stuff finally DOES begin to happen (amazonian and rubber alligator attacks, quicksand, etc.), it really isn't that interesting.

Although the actors aren't bad (for the most part), the characters' actions are questionable and the dialogue is thoroughly inane. (Sample: As the movie begins a telephone rings, and John Ireland exclaims: "That could be the phone!" Duh.) The hypnotic Carol Ohmart spent her too-brief Hollywood career playing an assortment of ballsy, larger-than-life characters, but she's totally wasted here playing what starts out seeming like an interesting part which immediately degenerates into a stock '60s woman-in-peril role. Similarly, western great Ireland has virtually nothing to do but skulk looking badly constipated. I find it baffling that either actor agreed to appear in this movie.

The one thing the film does have going for it is the location. I dunno whether or not it was actually filmed in Caxambu, but there is a great jungle locale that made for some nice visual compositions. Unfortunately, that's not enough to make up for the rest of the movie's shortcomings. Also the ending isn't bad, but it's abrupt and you can see the twist coming from a mile away.

Bottom line: It's only worth seeking out this rarity if you're a hardcore fan of the actors. And even then it's not really worth amazon/ebay reseller prices for the long out of print VHS.
Posted by Unknown at 7:51 PM