You, Me and Imelda: Brisbane Filmmakers' Unexpected Philippines Adventure

Dan Nancarrow’s interview with Andrew Leavold and Daniel Palisa in Brisbane Times, 01/09/12
The crowd of celebrity well-wishers, foreign dignitaries and family members had gathered for Imelda Marcos's elaborate 83rd birthday party in the Philippines in July this year.
Trudging through the mass were two wild-haired Brisbane filmmakers, looking less than glamourous in damp black t-shirts.
Andrew Leavold and Danny Palisa had arrived in the Philippines a few days earlier with the hope of interviewing the country's former First Lady on camera.
And now here they were, dripping wet after a sightseeing expedition in stifling heat, being welcomed into her inner sanctum. Mrs Marcos had called them over and introduced them to her closest friends and family.
"We're sitting in the VIP section expecting to be asked to leave," Palisa said.
"Everyone is looking at us like they were saying, 'Who are these guys?' ''
It's a story as outlandish as the storylines of the B-films Leavold and Palisa adore. But it's the sort of occurrence the pair have gotten more and more used to as they delved deeper into the Filipino movie industry.

The two filmmakers have been embraced by the Philippines' splendidly bizarre film community over the past six years. They've found a niche in the Southeast Asian country by chronicling its film history - all the while making friends in high places.
Their journey through the country began six years ago, when Leavold, the ex-owner of the now-closed West End cult film emporium Trash Video, went searching for traces of film star Weng Weng.
Weng Weng, a dwarf born Ernesto de la Cruz, is the Filipino James Bond whose face Leavold has tattooed on his upper left arm in mock-religious tribute.
Leavold's documentary on the star of For Y'ur Height Only and The Impossible Kid has been screened before in earlier cuts at film festivals. It sees him interviewing Weng Weng's co-stars and film crew trying to track down the whereabouts of the star, who died in 1992.
While Leavold eventually found the resting place of Weng Weng, he felt he needed a more fitting ending and tribute to the martial artist/actor. And went about remedying that situation earlier this year.
"I could still finish it but I needed something to tie the whole thing together and that was this bizarre quest to track down Imelda," he said.
In 1990, Weng Weng was recognised for services to the Filipino film industry by Mrs Marcos. After she presented him with the award, he reportedly joined her on stage and they sang a duet of My Way. [Incorrect, Mr Nancarrow - you’ve fallen victim to recycling urban myths!]
After an exchange of emails with Mrs Marcos's press secretary the pair were told to go to Manila "and wait further instructions''.
They then successfully negotiated plans to see the First Lady there and somehow found themselves invited to Batac, where Mrs Marcos would be celebrating her 83rd birthday. 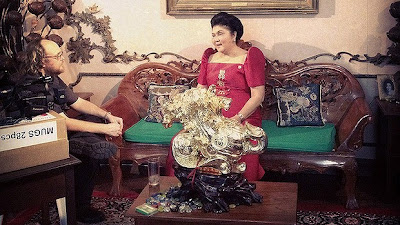 Meeting with Mrs Marcos in her Batac mansion the day of the celebrations, Leavold and Palisa found it hard to extract anything insightful from her on camera, with preparations for the party going on in the background.
"The sound was terrible, the picture was dodgy and all she wanted to do was talk about anything but cinema," he said.
"At the end of it I thought I had nothing, at the most a couple of pub stories. Even if we go home now it's sort of been worth it.
"Then she taps me on the arm and says 'Let's do this again tomorrow. But meanwhile would you like to accompany me to my 83rd birthday party?' " 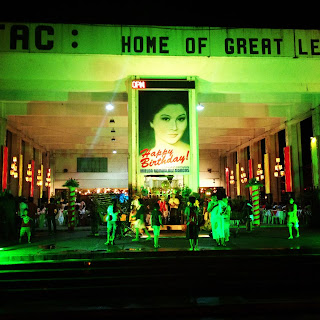 With their minder and Jeepney driver, they were escorted to the neighbouring sports stadium were the festivities were being held.
"We walked in and we thought we were going to be sitting up at one of the very back tables, but we're marched past the mayors and the provincial aides and the governors and such, past the band who are looking at us like 'Who the hell are these guys?'," Palisa said.
"Then we're walked into the VIP section behind the band and seated one table away from Imelda among the Marcos clan, the Chinese ambassador to Laoag and heads of banks." Thinking they'd be asked to leave at any point they were pleasantly surprised when Mrs Marcos called them over and introduced them to her family.
They stayed for four hours, watching Mrs Marcos's introduction the to crowd as "the most beautiful woman in the world, Mama Imelda" and soaking up the entertainment which included a 1970s crooner doing a duet with Mrs Marcos. Lastly they took part in a ritual where the former First Lady sat on a throne surrounded in flowers while each guest lined up to hand her a single rose.
"I handed the rose over and gave her a kiss on the cheek and thanked her for letting us come to her party," Leavold said.
"She said it was her pleasure. She had charmed the pants off us. She completely disarmed every expectation we had about her."
Leavold and Palisa had clearly endeared themselves to Imelda too. 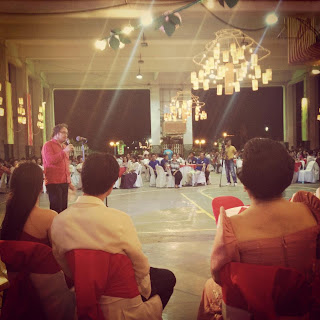 The next day the pair interviewed Mrs Marcos again, but not before they were taken to the mausoleum where Ferdinand Marcos's frozen body is kept, where the former First Lady planted a kiss on the glass box that encases him.
But as surreal as their trip had been, the filmmakers did manage to get some work done.
Over the course of two interviews (after a much more open exchange with Mrs Marcos the next day) the pair got the ''money shot" their Weng Weng documentary needed for completion.
"On the first day I asked her, 'Do you remember Weng Weng?' and you could see that it shook her out of her pre-prepared loop," he said.
Confirming that Weng Weng had been a visitor to the Marcos palace, she said he had been invited because he made the couple laugh. 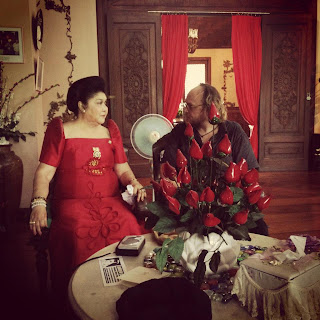 "She then started delivering this beautiful soliloquy about how Weng Weng was the 'little Filipino' who overcome his disability to become something extraordinary," he said.
But the artistry of Weng Weng wasn't the only issue the pair wanted to put to Mrs Marcos.
The pair are working on another documentary - The Most Beautiful Creatures On The Skin Of The Earth - centred on the Marcos family's relationship with cinema.
The documentary looks at the political and cultural importance of cinema to the Marcos's grip on the Philippines throughout their 20 years in power, beginning with the successful campaign film that help skyrocket Ferdinand Marcos to high office in the 1960s.
In particular Mrs Marcos, the driving force behind the creation of the Manila Film Centre, was asked about the films produced through the centre in the 1980s.
"In the early eighties, after the [Marcos critic and Filipino Senator] Benigno Aquino, Jr. assassination, Marcos's opponents - in particular the Catholic Church - started to gain ammunition against Marcos, who had a tenuous grip on power at the time," he said.
"All of a sudden pornography reappears - but state-sanctioned and state-funded pornography courtesy of the Manila Film Centre.
"If you imagine films would have been the panacea to soothe a troubled population then you can say that escapist films and films that make it look like the government supported arts and culture would be a good distraction from what was really going on in the Philippines - assassinations, endemic poverty and a real Communist uprising.
"It's pretty well agreed within critical circles in the Philippines that porn, along with horror, was the great distraction."
Combining extreme sex and violence, the films of the eighties were lapped up by the general population and the era is critically regarded as the last golden age of Filipino cinema.
"I asked her how she reconciled the pornographic films that the [government-owned] Experimental Cinema of the Philippines was funding?" he said.
She told Leavold that a pornographic film could be made as long as it ''corresponded to the true, the good and the beautiful''.
"So you could have a pornographic film as long as it was 'beautiful', or if it told 'the truth' about something," he said. "If it was artistic than it told a truth. If it was something that was anti-Marcos than it clearly wasn't about the truth.
"Her mantra was easily adaptable."
Leavold and Palisa are among those filmmakers who hold many of those experimental Filipino films of the '80s in the highest regard.
Which makes their third project possibly the most attractive to the pair.
Through their contacts they have made in the local industry they have scripted a film, Blood Red Sea, which has been taken on by the Film Academy of the Philippines, that reunites some of the country's action stars of the 1980s.
In the coming months Palisa is moving to the Philippines to work on the project, a prospect which he admits is quite daunting. But the pair shouldn't have anything to fear.
As Mrs Marcos might remind them, they have friends in high places.
"The thing about the Philippines is it is a weird and magical place," Leavold said.
"If you allow things to happen they will.''
The final cut of The Search for Weng Weng is expected to be released next year.
Production of The Most Beautiful Creatures On The Skin Of The Earth is ongoing.