The Tanduay Rum Diaries Part One 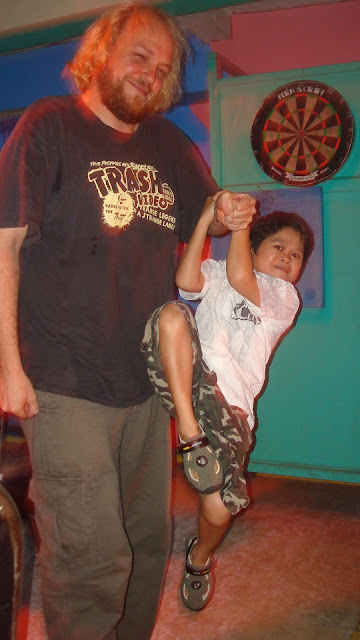 THE TANDUAY RUM DIARIES #1: THE MOST FAMOUS CROSS-DRESSING MIDGET IN THE PHILIPPINES (AT THIS PRESENT MOMENT)

"Mura's up for an interview," I tell Big Jim Gaines.

Long story, but he's my muscle in Manila: six foot-something, half African-American, martial artist and kung fu actor from the Seventies onwards, and if you watch Apocalypse Now, he's the tall black guy next to Robert Duvall. 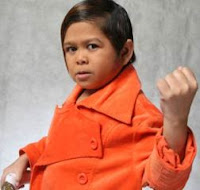 The Philippines' obsession with midgets hadn't ended with Weng Weng, I'm pleased to report. Only months before my trip, a tongue-in-cheek rehash of the Pinoy Bond series from the Sixties and Seventies had hit Manila screens starring boy-faced heartthrob Vhong Navarro. The original Agent X-44, forgotten action hero Tony Ferrer who's now into his Seventies and bloated from diabetes, returned as Tony Falcon role; Vhong is his reserve. And in a nod to For Y'ur Height Only, the 1981 midget spy spoof in which Ferrer plays Weng Weng's white-suited boss, reserve agent Vhong's own reserve agent is played a three foot-something midget superstar named. 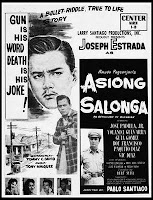 Tondo, it turns out, is Manila's Compton. A sprawling mini-city of one and two-story buildings near Manila's oldest port, housing some of the poorest inhabitants of Manila, and shanties made from packing crates and shop signs filling up the spaces between buildings for the even poorer, it's a grim slumscape made less depressing by the teeming life everywhere. Kids splashing in flooded laneways or on sidewalks doing dodgy deals, corner stores doing roaring trade in cigarettes and Smart Chat mobile loads - the place is humming, positively vibrating. Some of these shanties, so-called temporary dwellings for the itinerant or the landless, I suspect, have been here longer than the bricks.

To the rest of the Manila, Tondo's a myth, the birthplace of gutter Cinderellas and hoods like Asiong Salonga. Fellow Tondo-born icon and future President Joseph Estrada sealed his reputation by blasting up cinema screens as Salonga in 1961, a full ten years after the real gunslinger was shot in the head outside a Tondo corner store, and his story of a sewer rat turning to a life of crime been retold at least three times since to audiences weaned on tabloid cinema, if only to counter its cheap and tawdry thrills with the old "crime doesn't pay" routine. Other Tondo barakos (tough guys) have also been given the star treatment. Poor, and dangerous: that's how the rest of Manila knows Tondo.

The next day, Jim and I are in a cab driving along Tondo's main drag, looking in vain for Mura's turnoff. Steel gates on the west side block out the port facilities, while the eastern view from President Ferdinand E. Marcos Highway reveals just a hint of Tondo's endless warrens. It's hard to believe the most famous midget in the Philippines AT THIS MOMENT lives in the midst of such chaos.

Mura - real name Allan Padua - had become famous several years before as one half of a midget duo for ABS-CBN show Masayang Tanghali Bayan ["Good Afternoon Nation"] called Mura and Mahal (that's Tagalog for "cheap" and "expensive"). Noemi "Mahal" Tesorero was already established on TV from playing little girls and miniature Mae Wests; in real life she was a scandal magnet, confounding the press with tales of her disastrous relationships, and sexy home videos that had somehow slipped into the public domain. 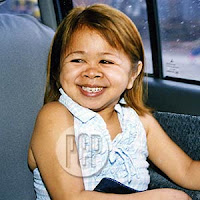 During his stint with Mahal, Mura would dress up in little girls’ clothes to appear as Mahal’s twin. Which also makes Mura the most famous cross-dressing midget in the Philippines. Despite subsequent roles sans dresses as Mars Ravelo’s Tiny Tony, as Nine Volt in Volta, and opposite Vhong Navarro as a friendly kiddie spook in Joyce Bernal's horror-comedy D'Anothers, he's remembered by many as a she. "Is she still around?" asked another curious cab driver. "She's a he," I relayed. "No…………" The driver looked genuinely disturbed. I hope I didn't shatter any hetero-specific fantasies he may have secretly harboured.

The cab stops, and two cops walk up to the passenger window. It's ten in the morning and they're clearly on amphetamines with bugging, almost varnished yellow eyeballs and the drug-sweats pouring out of them profusely. Jim warily winds down his window.

COP: (Peers through the window and starts babbling excitedly) You need police escort? You pay me? (Laughs hysterically) How much you give me?

Fifteen minutes later, we miraculously arrive at our destination. As the cab pulls up outside a two story karaoke venue, we're surrounded by eager urchins all yelling the familiar "Hello Joe!", the companion phrase to "Victory Joe!" reserved for GIs and random Caucasians since the Japanese defeat in '45. Moments like these you need to throw them a fistful of Twinkies and Seven-Ups and beat your own hasty retreat.

At the top of the narrow flight of stairs we're ushered into a large area flanked with karaoke speakers and plastic chairs stacked prior to showtime. Celina Racho, an immaculately dressed lady who is Mura's manager and, we deduce, karaoke queen, introduces herself. "And this," she says, "is Mura."

I turn around expecting someone at eye level, then look downwards to around knee height. A miniature man, no taller or larger than a seven year old boy, stretches out his perfectly-proportioned hand. "Hello," he squeaks, "I am Mura." 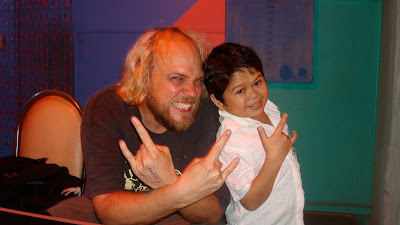 Celina shows us to Mura's dayroom: empty expect for a couch and TV, painted in vivid slashes of red and yellow. Mura's originally from Bicol province, and is taken care of by his manager and her husband, a businessman and politician. Similar to Weng Weng's story, I mentally note. How right I was.

Mura sits on the red couch opposite me and my camera. Big Jim translates, as Mura has only recently learnt Tagalog and, in his words, "No speak Engliss!"

"How old were you when you were discovered?" I ask Mura.

"Twenty three." With his cheeky grin, cherub cheeks and boy's clothes, Mura looks no older than seven. "And how old are you now, may I ask?"

My mouth must have hit the concrete floor, and Mura giggles. He then tells the story of how he was paired with Mahal, and on the second fitting produced the fateful dress. How did you feel, I ask, becoming famous for dressing up as a girl?

"It's work. I couldn't do anything. At first it was a surprise, I did not expect it. But people said that it fit me, that I look like a girl." He giggles again. "People said that I looked a lot prettier than Mahal."

I ask Mura if the role as Vhong's diminutive sidekick in Agent X-44 was written for him. "They wanted a Weng Weng to be cast opposite Tony Ferrer," he replies.

This makes sense! "Have you seen Weng Weng as Agent OO?"

"Yes, when I was very young. When he jumped out of the helicopter" - he starts miming the actions - "and jumps with the umbrella, and with the balloons. I appreciate Weng Weng, he's very good." 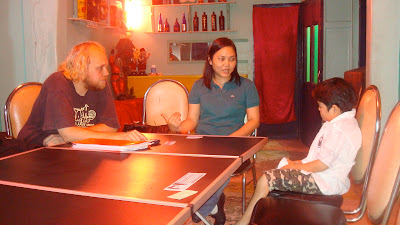 More than any time before, Weng Weng's legacy in the Philippines has become so much clearer. I ask Mura if he would ever star in a remake of an Agent OO film?

The mind starts clicking into hyperdrive. "I'll make it for you!" I declare. Mura seems pleased, and I'm in a near-state of ecstasy.

Back on the street, I point the camera at the Agent X-44 poster tacked lazily to the wall. Before I can mouth the words "establishing shot", Jim walks up and says in a low, authoritative voice: "Uh...put your camera away, dude."

"Dude, put the fucking camera away. Now walk towards the main road…(We head towards the main road) Walk a little faster. (We're now practically in a sprint) Now let’s get across the road. Don’t worry about the traffic. (We weave recklessly through four lanes of cars and trucks) Jump in the first jeepney you see. Don’t hail a cab, just get in."

Facing each other across the back of the jeepney - those decorated covered former army jeeps converted into cheap public transport - Jim finally relaxes.

ME: "Are you going to tell me what all that was about?"

JIM: "Dude, I know you were all excited about meeting the midget and shit, but JESUS CHRIST, man, this is the worst fucking neighbourhood in Manila! This is where kids practice working for the Syndicate by shooting live targets! Did you see those two guys with handguns down the front of their pants walking towards us?"

JIM: "And you’re waving around a four grand camera! Look at us - the Nigger and the White Trash? We stick out like fucking dog’s balls!"

Jim lights up a cigarette, and laughs at my mortified expression. 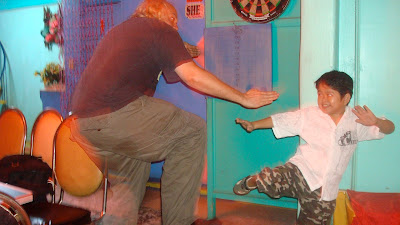 In early 2011, I hear from actor Jo Mari Avella that Mura was thrown from a tricycle in his home town of Albay in Bicol, and had broken both legs. Penniless and in desperate need of handouts from fellow TV personalities to pay for his rehabilitation, he resorted to begging on ABS-CBN. Thankfully one of his co-stars made decent press mileage out of handing over a cheque for Mura's rehab. To date, the little guy hasn't made it back into show business, and is in danger of sinking into the obfuscating muck of "who the fuck are you?"

The parallels between Mura's story and Weng Weng's are disturbing: celebrity midget, ubiquitous star of films and TV shows, living out of his manager's pocket and in their home, only to find himself ill, on the poorhouse's doorstep and relying on charity. At some point Mura's manager should be grabbed by her power-dressing lapels, and have the answer shaken out of her to the question, "Where did all the money from Star Cinema and ABS-CBN go?" And if there wasn't enough money to go around, why not? Sadly, the Philippines is full of stories of their celebrities outliving their usefulness and dying hungry and destitute, a symptom of a disposable pop culture which throws its forgotten waste on the smoking piles of refuse. Not surprisingly, Manila's most famous dump called Smoky Mountain, no less than a Breugel vision of Hell and home to thousands of squatters living off the dump's bountiful harvests before its redevelopment in 2007, is barely a kilometre up the road from Mura's playhouse.

Against odds such as this, and with Weng Weng's life story ringing alarm bells loudly, these fingers at least are crossed for Mura's speedy recovery and return to the limelight.
Posted by Unknown at 1:39 PM